The twist in light’s tail

Could you move objects by shining a light on them? How about a million lasers shining on an apple? Even though the apple may be fried in the process, Professor Miles Padgett explains how he and his fellow researchers have been studying light to discover how its “angular momentum” may be used for communications, sensing and imaging – and maybe even to move things around.

The Twist in Light's Tail Q&A

Seeing the light from new angles

Could you move objects by shining a light on them? How about a million lasers shining on an apple? Even though the apple may be fried in the process, Professor Miles Padgett and his fellow researchers have been studying light to discover how its “angular momentum” may be used for communications, sensing and imaging – and maybe even to move things around…

To explain the amazing effects of “orbital angular momentum,” Professor Padgett compared the twisting and turning of light beams to fusilli pasta. Later on, he also used spaghetti to describe how light is like a web of twisted lines.

Food must have played a major part in Padgett’s career, because he also described how his passion for orbital angular momentum began over dinner almost 20 years ago, when Professor Les Allen was quizzing him about his application for funding. As the two men tucked in to dessert, Padgett asked Allen about his own research, and since then he has spent his time following up Allen’s work by studying the “twist in light’s tail.”

The study of the angular momentum of light can trace its origins to Charles Darwin’s grandson, also called Charles, who wrote a paper in the 1930s, arguing that “if angular momentum was to be conserved when light is emitted from a high-order atomic transition, the spin component of light’s angular momentum had to be supplemented with an additional angular momentum.”

It has been known for many years that light has linear momentum – it exerts a force, or pressure, on objects it strikes and this force is equal to the power in the light beam divided by the speed of light. Padgett demonstrated this force in action, using a laser beam to move around tiny glass beads, about the same size as a single human cell. However, because the power of a laser beam is only three milliwatts, he pointed out that it would take about a hundred million lasers to move a single apple.

Padgett started off his lecture by comparing light waves to water waves in the sea, which also have momentum. Water waves are “plane waves” – they are regular and have a constant frequency. By contrast, normal light waves are like dinner plates which all push in the same direction, and can also be in spiral shapes – like fusilli or much more complex helical forms. As the light changes direction, the flow of energy is like the jets of water from a water sprinkler.

In recent years, researchers have established that these helical forms of light, and spiralling jets of energy, carry angular momentum. The helices may have one twist or multiple twists, including three twists just like fusilli. Light also has polarisation – it has an electrical field which rotates in a clockwise or anti-clockwise direction, and this means we can use it to transmit data corresponding to a dot or a dash. What Padgett and his colleagues are more focused on, however, is the orbital angular momentum of light which, thanks to the many ways it is twisted, could enable us to send more complex messages, using different helices to represent different letters of the alphabet.

As well as fascinating scientists, the helices in nature have also inspired many artists, and Padgett showed several examples, including the double-start helix stairways in the entrance to the Vatican Museum and a similar stairway in the Chateau de la Loire. Padgett then explained the research of other scientists and engineers who have published papers on various aspects of orbital angular momentum, including quantum optics and potential applications such as imaging and data encoding. He also mentioned some of the more esoteric topics such as the “fractality and the topology of light’s darkness,” describing the black specks observed when a laser beam shines on a surface – which shows “light has no phase at some points,” and “zero intensity.” “These lines of darkness are like spaghetti,” he added, “and all the light we see around us is actually riddled with these lines of darkness.”

Padgett talked about this “tangled web of darkness,” and quoted a headline from New Scientist magazine, describing his research as “twisted light – fast, furious and perfect for speaking to aliens.”

Padgett then discussed the rotational effects of light and the Doppler Effect – e.g., how the sound of a police siren changes its pitch as it moves away or approaches. Similarly, Padgett said, if a laser moves towards you, the light appears blue, while moving away from you, the light appears red. This change of frequency indicates a change of energy, with blue photons more energetic than red ones, and helps us understand how the power of light can move physical objects. “So where does this change in energy come from or go?” Padgett asked. He answered by explaining the change in energy as the work done against the force that the scattered light exerts on the moving object. But if this is the case, then perhaps a spinning object can also do work against a light beam’s angular momentum and, if this is true, would it lead to a new rotational form of the Doppler shift? To study this rotational Doppler shift, Padgett admitted that he and his colleagues “spent one year doing the wrong experiment.” Finally, by shining a light on a fast-spinning disk and measuring the frequency of only the twisted light, they found this rotational Doppler shift, even though the normal Doppler shift was still zero.

Observing the phenomenon of orbital angular momentum has “changed the way we talk about light beams,” Padgett concluded. We have known for a long time how lenses can focus a light beam, but now we know there is a family of light beams which do different things and thus have the potential for different applications such as communications, imaging and sensing.

What was the “wrong experiment” you spent a year on looking at light and the Doppler Effect?

We thought we could generate twist. Would the twisted light pick up momentum? No it did not – but instead we found a new type of Doppler shift.

You have talked about light almost exclusively in terms of waves, not particles. In your experiments, how do you screen out the particle side?

We use a lot of particles – we have focused on waves, but twist can be applied to single photons just the same as many photons. So light has a twist in both classical physics and quantum physics.

Any random light source has twist and twirl. A small beam of sunlight can have twist imparted to it and we have used white light through a pinhole to make objects rotate. The twist of light is not peculiar to lasers, but lasers are easier to use.

What about the practical applications?

One way to find out what people are doing is to monitor papers which cite our research, using our ideas to build on. Without doubt, most interest is in communications, moving from morse code to the full alphabet, for instance, to put more information on a light beam.

Can you send this information down a fibre?

You would need a wide fibre. The more twist, the bigger the beam and, until now, mainly zero twist beams have been sent down a fibre. You would need a special fibre to do it, or multiple fibres. Is light’s twist the solution? It is not the ultimate answer but the challenge is to ask the right question – e.g. how can we get more information down a fibre?

You have focused on optics, but what about microwaves?

We have done some work with microwaves, using 3mm wavelength beams. Another possibility is helically-phased soft X-rays. A synchotron is useful for X-ray crystallography of proteins, for example, to see if they are clockwise or anti-clockwise.. Sound waves also can carry twist and sound waves are a million times slower than light waves, exert a bigger force and hence can spin a dinner plate.

Could light be used to reposition satellites or reduce the weight of satellites?

To move an apple, you would need a million laser pointers and it would get very hot, so moving big things is not really an option. 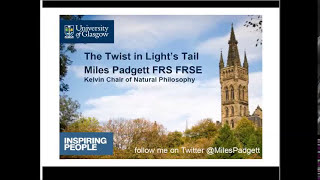