As recently as the 1980s, very few of us knew much, if anything about tsunamis. Although we have records of discussion of the phenomenon dating back millennia – for example, in 426 BC the Greek historian Thucydides suggested that ocean earthquakes were the cause – they had barely penetrated the general Western consciousness.

During the past 10-15 years there have been a number of disastrous tsunamis that have led to the deaths of over 250,000 people. 220,000 people perished in the Indian Ocean tsunami of 2004, and in 2011 almost 20,000 people died in Japan. In Europe, the hazard from a tsunami is small, although there were significant events 8,200 years ago and in 1755. All these events have led us to better understand the tsunami hazard and how we can mitigate it.

In this talk Professor David Tappin explains how these developments have come about and their future applications.

The 2004 Indian Ocean tsunami, which killed 220,000 people, changed our understanding and attitude towards this most devastating natural phenomenon. But while we are learning from each fresh event, there remains much we don’t know, said David Tappin.

Just two decades ago, very few of us knew much, if anything about tsunamis. Although we have records of discussion of the phenomenon dating back millennia – for example, in 426 BC the Greek historian Thucydides suggested that ocean earthquakes were the cause – they had barely penetrated the general Western consciousness.

All that was to change in 2004, when the cataclysmic tsunami hit in the Indian Ocean, taking 220,000 lives (out of the 300,000 believed to have been claimed by tsunamis since 1900). This event, affecting major tourist destinations in the video age, hit home as no tsunami had in the past, killing around 150 UK nationals and even more Europeans. Sweden, for example, was particularly hard hit, with 550 deaths. The event and its images made the front pages of newspapers worldwide for six weeks, and even spawned a film, The Impossible. Suddenly we were all involved, said Professor Tappin, sharing in one of the biggest disasters in history.

Yet it needn’t have been as bad as it was. Around 100,000 people in India, Sri Lanka and Thailand simply shouldn’t have died, and wouldn’t have if the proper steps had been taken. It took a good two hours for the tsunami to hit these coasts; that should have been plenty of time to evacuate the areas likely to be affected, and to save lives. There was, however, “no warning system, no evacuation, no chance”.

Perhaps more than any other, the Indian Ocean event was to change the way we deal with tsunamis, encouraging governments and agencies to take them more seriously and to put precautions in place. Others have also contributed to this, from the Mount Unzen tsunami in Japan in 1792, which killed 15,000 people, to Papua New Guinea in 1998, and Japan again in 2011.

But what exactly is a tsunami? The word itself is Japanese, with ‘tsu’ meaning harbour and ‘nami’ meaning wave, hence ‘harbour wave’. Most recorded tsunamis are from Japan. The tsunami is the most dangerous of the geological hazards, said Professor Tappin, and can cause devastation both near the source and considerable distances away. Although sometimes called a tidal wave, it has nothing to do with the tides, or the moon.

Most commonly, tsunamis are caused by earthquakes, which in turn are caused by convergence in the tectonic plates of the Earth. Not all earthquakes cause tsunamis – that which caused the Indian Ocean event had a magnitude of 9, and it’s believed that an earthquake larger than 7 is required. Thankfully, we believe that these are not that common.

Essentially, the tsunami is caused when a rupture in the sea floor pushes water upwards, starting a wave, which moves rapidly in deep ocean, reaching speeds of up to 500km per hour. As it reaches land, it slows to around 45km/h, but is squeezed upwards, increasing in height. It then heads inland, destroying everything in its path.

The Indian Ocean tsunami was the first to be measured by satellites passing overhead. This revealed that it was travelling at hundreds of kilometres per hour, at the speed of a jet plane. Tsunamis can travel huge distances; for example, from Chile to Japan. It’s hard to imagine the scale of the wave when it reaches land, said Professor Tappin, but even a six-foot man would have little defence against an 80-foot wave. “If you’re facing it, there’s very little chance of survival.”

There has been speculation that we are living in an ‘age of tsunamis’, with many reported in the last few years, largely on coastal margins or ‘hot spots’ off South America, the Indian Ocean, the northwest Pacific and the Mediterranean. “Sometimes that seems to be the case,” said Professor Tappin.

A tsunami warning system was developed in the Pacific in 1964, he said, but this wasn’t widely taken up. Until 1998, we didn’t really believe that events other than earthquakes could cause tsunamis. Papua New Guinea, where 2,200 people died, changed that. “For the first time we realised the movement of sediment on the seabed could be very dangerous indeed.” Although earthquakes cause 80–90 per cent of tsunamis, other known sources include landslides – from land or seabed; volcanic collapse or eruption; and the impact from meteorites.

Papua New Guinea was important to our growing knowledge about tsunamis, not just because of what was found, but how it was found – essentially mapping out seabed depths using multibeam bathymetry. Over a period of a fortnight, 19,000 square kilometres were measured. “I dived on it and it was one of the most exhilarating experiences of my life,” said Professor Tappin.

The Indian Ocean tsunami was caused by a massive earthquake, which ruptured 1,300 kilometres of crust. It wasn’t predicted, and it changed our understanding of where earthquakes happen. Before 2004, we thought that the largest earthquakes happen where young crust subducts rapidly, and that small earthquakes occurr where there is slow subduction of old crust, but now we know that isn’t necessarily the case. There are still a lot of unknowns, but we are learning all the time, with each fresh event. “We need, but don’t want, new events to make us wiser,” said Professor Tappin.

Now there are warning systems in place, and the threat of tsunamis is now taken much more seriously. Mobile technology allows people to have ‘apps’ to warn them of tsunami risk and there are also protocols about safe evacuation procedures. For example, in Cascadia in the northwest Pacific, people are now advised to get to a ‘safe height’ of 20, rather than 10 metres, although even this might not be enough in some instances.

The warning systems make use of buoys which record earthquakes and send the information to local centres, which then allows authorities to make decisions about warnings and evacuations, with rapid warning times now measured in minutes. “We are benefiting from the recent massive events because people now believe and are very much aware tsunamis are a major hazard,” he added, although there is a risk that numbers of false alarms might engender complacency.

There are other problems or challenges, in that we don’t know where the next big earthquake will strike, and not all countries are as well prepared as first world nations such as Japan. And although tsunamis are now well measured and recorded, we really still do not fully understand them. “There’s still a lot we have to learn,” Professor Tappin concluded.

Asked whether there are examples where early warning systems have saved lives, Professor Tappin said that in Japan in 2011, while 19,000 people died, in his view, 200,000 people were ‘saved’ because they had been warned to take action before the tsunami struck. “Our understanding improves with each event, and early warning systems are improving,” he said. Indeed the risk is that if you evacuate people too often, and nothing happens, then they might lose confidence in the system. His key message, however, is that if you feel an earthquake and are on the coast, then you should get to high land.

Asked about other methods of mitigation, he said that while hard engineering is used in Japan to protect against tsunamis it isn’t always effective. For example, if tsunami walls are over-topped then they will not work.

Asked about risk along the coast of Norway, Professor Tappin said it is a hazard, and there are concerns about it.

The last questioner wanted to know about the impact of global warming. Professor Tappin said it could have an impact but that we don’t yet fully understand it. 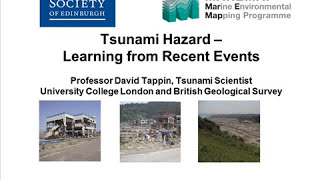