Observations of the surface of the sea can often be misleading. Even with relatively calm conditions, powerful waves capable of destroying underwater vehicles and tilting offshore platforms may still exist deep within the water column. These so-called internal waves, some of which have amplitudes of more than 100m, propagate on density surfaces and are ubiquitous in the world’s shallow seas and deep oceans. Professor Davies shows observational evidence for these waves and described attempts to model their behaviour.

Beneath apparently still waters, waves can travel through the deep. They might have amplitudes greater than 100m and speeds of two metres per second (2m/s) but on the surface their passing may be marked with little more than momentary choppiness. Understanding these internal solitary waves – ISWs – poses intriguing intellectual challenges with eminently practical implications, according to Professor Peter Davies. In his Lord Kelvin Prize Lecture, Professor Davies showed how research in this area is of particular value to the oil industry, which suffers from the impact of these remarkable phenomena.

ISWs can exist where water is stratified by temperature and/or density. They are ubiquitous, found below the surface of oceans, lakes and associated with river plumes, although particular conditions must be right for their formation. Most are generated by tidal flow over bottom topography – banks, sills and continental shelves.

Professor Davies noted that the first person to record observations about internal waves was the American polymath Benjamin Franklin. In 1762, he described the waves formed within a lamp he had fashioned for a transatlantic voyage with a layer of oil on top of a layer of water. Franklin said that whilst “the surface of the oil was perfectly tranquil”, the water beneath was ‘in great commotion, rising and falling in irregular waves’.

More than a century later, in 1893, the Norwegian Fram expedition ran into ‘dead water’ in the Arctic Ocean. This phenomenon, long known to seafarers, left the ship barely make way despite its engine being at full power. Professor Davies said the expedition leader, Fridtjof Nansen, discovered its cause, writing: “The water on the surface was almost fresh, whereas through the bottom cock of the engine room we got perfectly salt water.” Nansen realised that dead water was associated with the existence of density stratification in the water column. The energy from his ship’s engine was no longer propelling it through the water but, instead, was merely generating ISWs on the boundary between the lighter fresh water – from melting ice – and the denser salt water beneath.

ISWs are detected by field oceanography experiments such as SWARM, which in 1995 picked up on periodic variations in the interface between layers of warm and cold water in the water column over the continental shelf off the coast of New Jersey. Whilst the surface showed almost no perturbation, the transitional layer fell and rose by 20m as each ISW passed by. Professor Davies observed that some ISWs have particularly large amplitudes, including some measured at 150m in the South China Sea.

Professor Davies explained the circumstances that allow the existence of internal waves in stratified fluids. If a disturbance acts upon the water column and lifts a heavy particle vertically upwards, it finds itself in a lighter environment and so sinks back down again. But as it sinks, it overshoots its original position, finds itself in a heavy environment and so rises again. This buoyancy in the density profile provides a restoring force that allows waves to exist within interfaces deep below the surface.

ISWs constitute a particular class of internal waves; they are nonlinear and permanent, capable of travelling for thousands of kilometres without changing shape. In the ocean, they mostly have a depression and no peak and travel at some 8km per hour (2.2m/s), with a wave length of 2–5km and wave fronts typically 100km long. Professor Davies said their impact on the surface of the water can be subtle, although sufficient to be detected through radar imaging. Observers on vessels on the sea surface report increased roughness, and sometimes noise and buffeting, as such waves pass underneath.

Professor Davies said ISWs may be implicated in the loss of two US nuclear attack submarines in the 1960s. The Thresher, with 129 submariners on board, was lost 350km east of Boston in 1963. The vessel was immobilised at 400m depth – about 100m above its crush depth – when its nuclear reactor shut down. One theory is that the submarine was then caught by an ISW that pushed it below 500m and hence to its destruction. The Scorpion, lost in 1968 with 99 people on board off the Azores, may have suffered a similar fate.

The induced velocities associated with ISWs are high – typically 2m/s, an order of magnitude greater than ocean currents. Professor Davies said this meant that any structure placed in their way would experience a significant impact. Reports include rigs being tilted by several degrees or displaced up to 200m horizontally, damage to moorings, loss of ROVs and a variety of other technical difficulties. The cost of such effects runs into millions of dollars every year.

Four years ago, an ISW early warning system was set up in the Andaman Sea to explore whether it would be possible to alert offshore oil installations. Arrays of instruments in two locations measured stratification and velocities in the water column to detect ISWs.

Professor Davies said these could telemeter preliminary warnings to rigs 16 hours in advance of their arrival, with full warnings 11 hours ahead. This would give enough time to take preventative action, such as adjusting platform infrastructures and repositioning floating production, storage and offloading units that are particularly vulnerable to ISWs.

Such initiatives have drawn on the solid theoretical understanding of ISWs that has been built up over many years. But there are continuing developments. Professor Davies’ current research focuses on the effect of the shallowness of the water and the importance of the bottom boundary – the seabed – on ISWs.

His team models these waves in long tanks in the laboratory. The stratigraphy is made up of salt and fresh water layers, with a transitional layer in between. ISWs are created by releasing an excess of fresh water from behind a gate at one end. Tracer particles suspended in the water are used to reveal velocity.

In this way, Professor Davies’ group was the first to detect and measure a boundary jet flowing in the opposite direction to the main flow of the wave. The effect, which had been predicted by numerical models would, at full scale, be 20–30m in size close to the bottom of the water column, with a velocity of up to 10m/s. When the group forced the boundary jet more vigorously, it became unstable, with large, circulating eddies. These produced a disturbed region, containing particles lifted from the bottom that spread higher up the water column.

With really high amplitude waves, Professor Davies’s group found that intense billows formed and broke along the interface, causing a lot of disturbance downstream of the wave trough, where denser and lighter water underwent significant mixing. The group used fast-moving probes to reveal that almost all of the mixing occurred within the billows themselves.

There are a number of areas of potential future research that Professor Davies thought particularly promising. These include:

Professor Davies concluded: “There’s been a big growth in activity in this area in the last ten years and I think in the next 10–15 years there are many opportunities for young people entering the field of environmental fluid mechanics to really make some big impressions in this subject.”

A former submariner asked whether ISWs could have made his Royal Navy patrol submarine roll by 45 degrees every two minutes while parallel to the continental shelf off the Atlantic coast of Ireland about 40 years ago. Professor Davies said that while ISWs are observed in that region, they were not particularly large in amplitude.

How important are ISWs for marine life?

Professor Davies said they could transport material such as nutrients or larvae large vertical and horizontal distances.

Could global warming have an effect on ISWs?

Professor Davies noted that ISWs are only created when the stratification of the water column, the topographical features and the tidal frequencies are just right. So if changes to the temperature of the oceans are felt more in one part of the water column than another, this would probably affect the occurrence of ISWs.

As global warming causes the polar ice caps to melt, is there evidence that the quantities of fresh water pouring onto denser salt water is increasing the frequency of ISWs?

Professor Davies said he did not know of such evidence. However, he observed that whenever there is an increase in the surface flow of fresh water onto salt water, there is the possibility of generating ISWs.

Is the offshore industry taking on board the latest developments in ISW research?

Davies said the industry was certainly interested in ISW research, particularly in the impact of the waves on sea floor sediment, because the possible sediment suspension and erosion processes may damage sub-surface communications and have potential to harm cables, pipelines and seafloor installations.

Could ISWs occur within the aorta, the blood vessel that takes most of the output of the heart, and possibly be a cause of aortic aneurism?

Professor Davies said there was a flexible boundary to the aorta that could in principle support the propagation of solitary waves, but he was unaware of any work in this area directly comparable with the work he had described on ISWs.

What effect could ISWs have on a buoyant plume, such an oil blow out?

Professor Davies noted that no research had been done to address this question. He suggested ISWs would probably deflect the path of the plume, but would be unlikely to carry the contents of the plume with them, although this might occur to a degree if the ISW was breaking by a continental shelf. 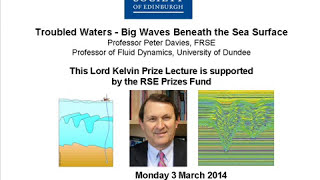 RSE Fellows elected to the Academy of Medical Sciences
RSE awards half a million pounds in research funding to benefit Scotland’s cultural, economic and social wellbeing
The effect of electric current on magnetic field structures in the solar corona
Manage Cookie Consent
We use cookies to optimise our website and our service.
Manage options Manage services Manage vendors Read more about these purposes
Preferences
{title} {title} {title}