Telford’s achievements in early 19th Century engineering earned him the accolades from Robert Southey, the Poet Laureate at the time, of ‘Colossus of Roads’ and ‘Pontifex Maximus’. Telford was also renowned for his outstanding promotion of the importance of knowledge and education.

This illustrated presentation from Professor Roland Paxton, Heriot-Watt University, detailed Telford’s life from humble origins in Eskdale to becoming the greatest civil engineer of his era.

Telford’s achievements in early 19th Century engineering earned him the accolades from Robert Southey, the Poet Laureate at the time, of ‘Colossus of Roads’ and ‘Pontifex Maximus’. Telford was also renowned for his outstanding promotion of the importance of knowledge and education. This illustrated presentation from Professor Roland Paxton, Heriot-Watt University, detailed Telford’s life from humble origins in Eskdale to becoming the greatest civil engineer of his era.

Thomas Telford was born in 1757 in Glendinning, to the north of Langholm. He was actually the second Thomas Telford, his elder brother of the same name having died in infancy. Initially training as a stonemason, part of his early work was on Langholm Bridge. Examining the bridge, Professor Paxton has found what he believes is Telford’s mason mark – an arrow with a lozenge at the top and a cross halfway along the shaft.

Telford was soon to outgrow the opportunities in Langholm and moved to Edinburgh, where he worked on the New Town, and also learnt to draw and become an architect. A year later he moved on again, to London, where he was a stonemason working on Somerset House, and from there to Shropshire.

It was in Shropshire that Thomas Telford became established under the patronage of William Johnstone (who was to become Sir William Pulteney), heir to the Earl of Bath and reputed to be the richest commoner in England. He switched from stonemasonry to architecture and went on to become County Surveyor for Shropshire. Indeed, a drawing of the ruins of the Roman Baths in Wroxeter in the county, dating from 1788, is considered to be one of the earliest surviving drawings by Telford.

In his County Surveyor role, Telford was involved with a variety of projects such as houses, churches, including Bridgenorth Church, roads and bridges, and canals. Additionally, Sir William Pulteney, as a patron of the British Fisheries Society, engaged Telford in some of his other favourite projects, including designing parts of the street areas and harbours in Ullapool and Wick in the 1790s.

Returning to Shropshire, Telford was to proceed with a number of significant bridge-building projects, including Montford Bridge, a ‘chunky’ masonry bridge that still carries traffic today, and the more architecturally attractive bridge in Bewdley. Around the same time, he also began working with iron, utilising it for the beams of Longdon-on-Tern Aqueduct on the Shrewsbury Canal. Iron and masonry were subsequently combined in his major aqueduct works at Ellesmere and Pontcysyllte, which were described by Professor Paxton as the “greatest structural engineering achievements of the canal age”. The latter uses a cast iron arch to support the 1000 ft-long trough above it, a unique state-of-the-art design for 1805, and making it deserving of its ‘World Heritage Site’ status now. An artefact from the time that Professor Paxton has acquired personally, and is the only one known to still be in existence, is a wax-seal on a Telford letter carrying the initials TT and images of both Pontycysyllte and Chirk aqueducts.

Focusing on ironworks and developing from the first major iron bridge at Coalbrookdale, Telford looked for opportunities to use iron more effectively, i.e. using less in total but at the same time increasing the span. Putting this into practice, his design for the Buildwas Bridge used 50% less iron than the original Coalbrookdale Bridge, yet had a 30% greater span. Indeed, although it wasn’t actually built, this inspired Telford to design a 600 ft-span iron bridge, remarkable when considered in comparison with the fact that 100 ft was the maximum possible at the time.

Other major bridge and road building projects works continued in Scotland. In Dumfries and Galloway, this included a road scheme in Kirkcudbright, the Tongland Bridge and the Glasgow to Carlisle road passing through the region. In the Highlands, this included over 1000 miles of roads and bridges, including Bonar Bridge, Glen Shiel Bridge and Dunkeld Bridge, the largest of the Highland bridges.

Canals also feature significantly in Telford’s work, most notably the Caledonian Canal running across Scotland from Fort William to Inverness, linking Loch Linnhe to the Beauly Firth through Loch Lochy, Loch Oich and Loch Ness. Particular achievements are the eight-lock ‘Neptune’s Staircase’ at the southern end at Corpach and the sea outlet lock at the northern end, where the ground clay was so soft it had to be ‘preconsolidated’ with stones to force it down before the lock could be built up. Telford was also involved in other canals, especially in the Midlands, where he was a consulting engineer to 30 companies. This included development of Ellesmere Port, which was to become the most important interchange between the canal network and the sea. His general approach was to maintain straight lines and levels where possible, which explains the number of high bridges that are encountered along the routes of his canals. Other maritime developments were substantial, sophisticated dock works, such as St Catherine’s in London.

A further strand to Telford’s civil engineering was his work on roads, both as the lead engineer on specific major projects such as the London to Holyhead connection and in his provision of a manual of his general rules for preparing and repairing roads. All the Turnpike trusts utilised this manual, which was more comprehensive than McAdam’s book on road making that was published at a similar time. The key differences were that Telford’s guidelines dealt with foundations, profiles and gradients, whereas McAdam focused on the top surfaces.

Internationally, Telford was engaged as a consultant engineer by the King of Sweden, who was to recognise and refer to him as ‘Sir Thomas Telford’.

As well as all his work on actual projects, Telford continued to consider new ideas and from 1814 to develop designs for bridges, including a 1000 ft-wide iron wire suspension bridge. This established some important principles on which future designs for major suspension bridges such as at Runcorn and across the Menai Straits, would be based upon. The Menai Bridge, engineered by Telford, was the world’s first great suspension bridge.

Professor Paxton concluded with a few comments on Telford himself, reporting that he never actually married as he was always working. His philosophy on civil engineering was that it was about the art of directing great forces of nature for the use and convenience of mankind, and indeed no one did more to put this into practice. Recognition for his contribution included being the first president of the Institute of Civil Engineers and, following his death in 1834, he was buried in Westminster Abbey. However, the biggest testaments to Telford are the multitude of civil engineering projects that he directed, a number of which last through to today, some two centuries later.

How did Telford manage to achieve so much in his lifetime?

Telford was a great engineering manager, with a key to his success being his ability to carefully select competent colleagues and contractors to his team. 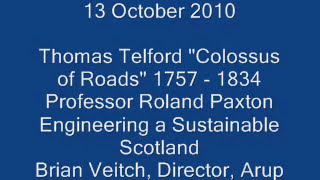