The past as propaganda in the Declaration of Arbroath

The Declaration of Arbroath (1320), the most famous document in Scottish history, is a letter to Pope John XXII that maps out Scotland’s history and uses that history as propaganda on behalf of a request about the Scottish throne. The largely fanciful history presents the Scots as a chosen people, protected, at Jesus’ behest, by St Andrew, and it compares Robert the Bruce to Joshua and Judas Maccabeus.

Professor Alexander Broadie argues that, aside from the fantasy, there is also a powerful and persuasive intellectual underpinning to the Declaration, one closely associated with Scotland’s greatest medieval thinker, John Duns Scotus.

Alexander Broadie FRSE is Honorary Professorial Research Fellow at Glasgow University. He is the author of fifteen books, the majority on Scottish intellectual history. His most recent book A History of Scottish Philosophy (Edinburgh University Press: revised edition 2010) was the Saltire Society Scottish History Book of the Year, 2009. 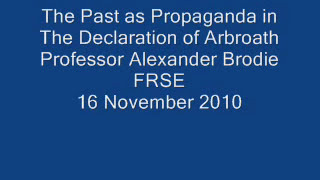