The appliance of science in the rural sector of Scotland

Professor Iain Gordon outlines how working in close partnership with the rural sector, scientists can help inform how ‎land is used. Through effective engagement, the development of new innovations and collaborative ‎learning, scientists and the rural sector can ensure the future environmental quality and economic ‎prosperity of our land.

‎He addresses the contribution the James Hutton Institute can make to the future of agriculture and society at home and overseas and looks at the importance of close cooperation between scientists and the wider community, in order to provide the best possible future in a world faced by climate change and rapid population growth.

The Appliance of Science in the Rural Sector of Scotland: Science connecting land and people Q&A

Professor Gordon recently returned from Australia to become CEO of the newly-formed James Hutton Institute. His lecture, which was chaired by RSE President Sir John Arbuthnott, addressed the contribution the Institute can make to the future of agriculture and society at home and overseas. It also looked at the importance of close co-operation between scientists and the wider community, in order to provide the best possible future in a world faced by climate change and rapid population growth.

Professor Gordon began by paying tribute to Peter Wilson as a dedicated agricultural researcher with a tremendous ability to bring others together in pursuit of common goals. At the same time he was someone who was keen to see science applied for the good of the world, recognising that agriculture does not sit in isolation, but exists in a context of changing needs, huge demands and high expectations.

This year saw the world’s population reach seven billion. Current predictions suggest this will rise to 9–10 billion between 2030 and 2050. The consequent 50% increase in demand for food would require an additional 120m ha of land in developing countries for crop production alone. This was aside from the pressures generated by a massive surge in the need for energy and fresh water. Professor Gordon said: “This is all happening at the same time as we are trying to reduce the damage to our natural capital, through soil erosion, biodiversity loss and climate change.” Climate change, he added, is leading to extremes in terms of flooding, fire and drought.

The James Hutton Institute was formed in April 2011 by a merger between Aberdeen’s Macaulay Land Use Research Institute and Dundee’s Scottish Crop Research Institute. It brings together skills and expertise from a range of backgrounds to foster research into new products, ideas and innovation for the rural sector. It was named after Scottish Enlightenment polymath and Founding Fellow of the Royal Society of Edinburgh, James Hutton (1726–97), who is regarded as the father of modern geology and who was the first to regard the Earth as a dynamic system. He also had a farm in the Borders where he used his skills and observation to improve animal and crop production.

In addition to the main sites in Aberdeen and Dundee, the Institute also has research stations, and runs projects, across the UK and worldwide. With 450 scientists, 150 support staff and 120 PhD students, it is among the biggest organisations of its type in Europe. It spans five main areas of science:

According to Professor Gordon, one of the defining features is that: “we don’t do research in isolation, we do it with the people who are going to use it on the ground … we deliver our knowledge and innovation to stimulate economic growth and support people’s livelihoods and wellbeing.”

The institute’s core areas of activity are around:

These are of immense importance to the future prosperity and survival of the human species. Soils and biodiversity are rapidly being lost; new energy crops are required as fossil fuels run out, better water management is essential to cut demand and pollution; and innovative ways are needed to control pests and crop disease.

The emphasis is on practical science and, increasingly, on knowledge exchange rather than simply knowledge transfer. This means the scientists working with others in order to achieve the most beneficial results. An example of what can be achieved is in the success the SCRI has had in developing new crop varieties. An economic impact study calculated that its cereals, brassicas, soft fruit and other products generate £225m a year for the UK economy – with every £1 of public investment yielding £17.

Marketed through the Institute’s commercial subsidiary, Mylnefield Research Services, the Lady Balfour potatoes are the UK’s top organic variety, while its Glen Lyon raspberries are the industry standard in Spain, with Glen Ample holding the same position in the UK. The James Hutton Institute’s crop species help farmers address serious challenges, such as how to produce highly marketable crops with less water and fertiliser, and generate less waste without creating phosphorous and nitrogen imbalances.

The Institute is also dedicated to developing sustainable farming practices and ones that meet consumer demands for healthier and safer foods. It is helping develop agricultural systems based on an ‘ecosystem approach’. This sees crops as part of the wider environment rather than as a separate issue. One aspect of this is to take an integrated approach to pest control. This replaces pesticides with a combination of biological and chemical methods to achieve sustainable production.

The Centre for Sustainable Cropping at Balruddery, near Dundee, is of especial value. It is the focus of a 24-year experiment allowing the farm-scale development of sustainable cropping systems to enhance biodiversity, reduce greenhouse gas emissions and improve soil quality while maintaining productivity. It covers everything from pest and weed forecasting to crop and productivity monitoring.

At an even larger scale, the Institute is involved in detailed assessment of Scotland’s arable farms. This involves monitoring 50 farms, and 100 fields – organic, integrated and conventional. One area of research is the level of carbon in the soil. Results from the monitored land show that half contains less than 3% carbon in the soil, and a third exhibits conditions that restrict the growth of roots. The professor said: “many of the agricultural practices that have happened in the past are now limiting the amount of crops that can be produced on these farms”.

One project where the institute hopes to work closely with farmers is in the development of the Land Capability Assessment (LCA), which shows the potential uses of land across Scotland. This should soon appear on the internet, offering farmers a ‘ready reckoner’ for planning their activities. Of even more immediate value is an iPhone application that will allow farmers to get an instant assessment of the carbon content of their soil.

The Institute is working with estate owners in upland areas to help them in a variety of ways, such as effective deer management. Tackling issues such as this, as well as grazing and grouse management, is vital in enabling landowners to develop land use strategies which reconcile competing interests; for example between neighbours or between public and private use.

Whole communities and catchment areas are now benefiting from the Institute’s research into coping with flood risk. It is making data freely available, which is of great value to help mitigate the effects of higher rainfall and the increase in extreme weather events that will result from climate change. It is working in the Dee catchment area to identify potential flood hotspots. One of the outcomes has been a successful campaign to raise awareness of good septic tank management, to reduce the level of bacteriological infections – such as E. coli – which get washed into the groundwater.

Professor Gordon said the Institute is dedicated to getting the public involved in dialogue by creating forums to express views about the future of agriculture and land use. One way it does this is with a ‘virtual landscape theatre’ where images can be projected on to a screen to show the impact of changes – for example the presence of wind turbines.

Of huge potential importance are the development of new centres of expertise, which make use of the knowledge held by the Institute, the other main research providers and the country’s universities. These are supported by government and deliver objective, integrated and authoritative advice to policy makers, and industry, on water, climate change and animal disease outbreaks. “Science has to play a major part in providing the information required by society to make a difference to the life we lead,” said Professor Gordon.

Looking to the future, the professor said it is important for the Institute to build closer links with universities at home and worldwide. It also needs to improve its knowledge-exchange processes and strengthen its ties to the consultant network, especially in the agricultural sector. The Institute will be doing more to harness the power of social media and the internet to communicate with the wider public and demonstrate the value of its research. There is also a need to work more closely with stakeholders, such as businesses, to develop products in collaboration with them.

Absolutely vital for the future is the ability to work in a trans-disciplinary way in an applied context. The Institute is able to do this because of the excellence of the training it provides to its 120 PhD students. These, said Professor Gordon, are the “lifeblood” for the future of the research community in Scotland and internationally, as they are future scientists that are fit for purpose for the 21st Century.

Asked about the economic benefits brought by the Institute, the professor said they have great potential for growth. This is in terms of both improving production at home and also exporting technologies and products, such as new species, to countries such as China, India and Brazil.

The issue was raised as to whether the domestic ban on GM research was causing a brain drain or holding back Scottish science. He responded that he did not know of any researcher leaving specifically because they could not carry out GM research. However, he said it would be preferable to be able to carry out GM research, especially as it is happening internationally anyway, in order to make fully-informed decisions over whether or not it should be used in the local and international context. Without support for research into GM at the Institute, we would struggle to maintain our world leading position in crop research.

The professor was asked about the impact of global warming on Scottish land use. He said that our research suggests that changes in temperature and rainfall could bring an increase of up to 40% in prime agricultural land by 2050. How to use this land needs to be debated, as some of it appears to be earmarked for forestry. He added that where this land is to be used for agriculture, there may need to be technical advances in order to take advantage of the improvement in land capability for crop production. One reason is that the weather is predicted to become wetter in winter, which would require the development of different equipment, as conventional farm machinery could simply get bogged down.

On the relationship between farmland and coastal waters, Professor Gordon fully recognises that the land and sea are intimately linked; for example, what is washed off the land and down our rivers can have a profound impact on the sea. He said it was an area in which links between research institutes, universities, the Scottish Association for Marine Science and Marine Scotland needs to be strengthened.

Asked where Scottish agriculture is heading, the professor said he believes it has a very significant future, not least because of the need for food security in order to reduce dependency on imports. 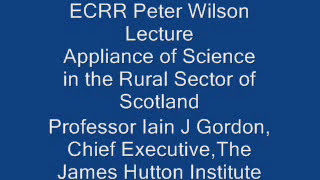