In Shakespeare’s Henry IV, Part 1, Hotspur is made to refer to the partiality of Owain Glyndŵr (Glendower) for prophecies, which he characterises dismissively as “skimble-skamble stuff”. This lecture explores the authentic medieval Welsh literary corpus associated with Glyndŵr, consisting in the main of bardic eulogies rather than prophecies and mostly composed before the outbreak of the 1400 revolt.

The poems are examined in historical context including some of Scottish interest (alluding to Glyndŵr’s participation in the English invasion of Scotland in 1385). Themes to be considered include the poems’ possible utility, both before and during the revolt, as political propaganda designed to further Owain’s cause. 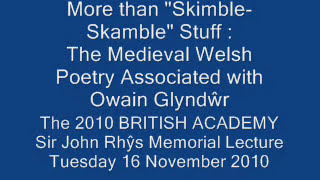