Home » Resources » Video » The simplicity and complexity of wind: An engineer’s tale

The simplicity and complexity of wind: An engineer’s tale

The energy in the wind is generated by the sun heating the earth’s atmosphere which then cools as the earth rotates on its axis, forcing movements of large volumes of air across the globe; a simple behaviour that will persist for as long as conditions on earth allow. Humans have been utilising this energy for thousands of years and used increasingly technical developments to efficiently extract its power.

However, despite the general development of engineering capability, there is still some way to go towards fully optimising the potential of wind energy conversion devices.

Ian Irvine, co-founder and Technical Director of SgurrEnergy, explains why he believes the origin of this issue is the character of wind and a general lack of understanding of the complexity of this renewable energy resource. He also explains his belief that remote sensing will enable wind energy technology to increase its contribution to carbon emission reduction. 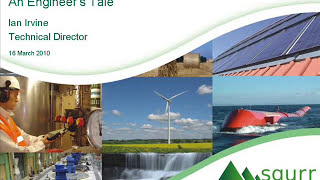