The significance of David Hume: Scepticism, science and superstition

David Hume has long been seen as Scotland’s – and indeed the English-speaking world’s – greatest philosopher, but also as a puzzling thinker, with sceptical views that seem hard to reconcile with his enthusiastic advocacy of human science. Recent interpreters have moved towards a far more coherent and integrated view of his philosophy, revealing a strikingly modern thinker who is increasingly honoured as a rival to Aristotle and Kant as arguably the most significant philosopher of all time.

This lecture presents Hume in this light, as a scientific revolutionary and a crucial influence on Adam Smith, Darwin, Einstein, and a host of recent philosophers. It exhibits for the first time a new electronic edition of Hume’s posthumous masterpiece, the Dialogues concerning Natural Religion, whose handwritten pages cunningly encode his still-disputed attitude to religion. 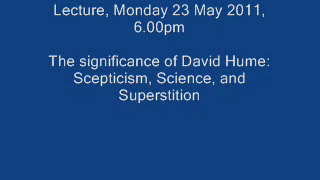 Privacy and security risks caused by thermal imaging
Curiosity is the gift that keeps on giving
Thirteen Fragments
Manage Cookie Consent
We use cookies to optimise our website and our service.
Manage options Manage services Manage vendors Read more about these purposes
Preferences
{title} {title} {title}