Seeing Scotland afresh – How we look to a changing world

The former Permanent Secretary of the Scottish Government, Sir John Elvidge, reflects on international perceptions of Scotland and suggests that we should be more outward-looking – and take advantage of our improved image in many countries since devolution.

Sir John Elvidge reflects on the challenges and opportunities for Scotland in a changing world, both for how we see ourselves and how others see us; in particular, with the shift of economic power to the East. Is it time to shift our attention more towards our growing relationships in Asia rather than the traditional diaspora in North America? What is it that China finds so fascinating about Scotland, for example? And what are the implications for policy and for the practice of taking this broader view?

Seeing Scotland as others see us… Q&A

The former Permanent Secretary of the Scottish Government, Sir John Elvidge, reflects on international perceptions of Scotland and suggests that we should be more outward looking – and take advantage of our improved image in many countries since devolution.

Sir John established right from the start of his lecture that Scotland’s handling of recent constitutional changes is regarded as a great strength – and is also something that should never be taken for granted. While many other countries struggle to cope with constitutional change, Scotland has made the transition to devolution without any violence or social unrest. Our politicians have also managed to govern effectively in coalition and as a minority government – an outcome deemed unlikely before devolution.

Many countries follow very closely what is happening in Scotland and Sir John believes that we should take a much greater interest in the countries which take the most interest in us, and exploit the opportunities this offers to our businesses and universities.

Perceptions matter, said Sir John, and it is natural we care about what others think of us, as a people and as a country. If people want to visit, live and learn here, do business or invest here, it has a major impact on the national economy and on the national psyche. And the good news is that Scotland is performing very well in international league tables, including the Anholt-GfK Roper Nation Brands Index, where Scotland was Number 14 in the world in 2010, with an aggregate score of 59.67, based on the views of 1,000 people in each of 20 countries, assessing factors such as governance, exports and culture. Reducing our performance to a single number like that may seem absurd (like The Hitchhiker’s Guide to the Galaxy, where the number 42 is “the answer to Life, the Universe and Everything”) but it means that Scotland is regarded very highly abroad.

Sir John then added: “The ebb and flow of day-to-day events has no demonstrable effect on perceptions.” While people in Scotland may be more concerned with day-to-day events, other countries are more interested in government stability and peaceful constitutional transition, in contrast to the difficult experience of regions such as the Balkans, for example. There is no “automatic immunity” within the UK to the difficulties of constitutional change, and Northern Ireland serves as an example much closer to home of the turbulence this often causes.

Violence and social unrest are “not just peripheral issues,” Sir John said. Even Spain and Belgium have their problems when it comes to cultural and linguistic identities, while China and India also have to deal with problems caused by ethnic, social and religious diversity. When other countries look at the UK, they are more interested in how we’re redefining the Union, while we often seem more concerned with issues such as “fine-tuning macro-economic policy.” And Scotland is an interesting example of stable constitutional transition because the changes have been greater and sometimes even surprising – the settlement was supposed to be “an insurmountable obstacle” to one-party rule, but the recent election defied this, and we have had an “orderly infancy” since devolution.

“Our experience in adapting to coalition was an achievement in itself,” said Sir John, creating the stability needed to deliver the programme. And the most remarkable achievement was that we also adapted to minority government. “It would be hard to find a precedent or parallel to this,” Sir John continued. Other countries don’t necessarily want to emulate Scotland, but they are interested in the process of change, and how we have avoided unrest and adapted to the “unexplored territory” of unexpected outcomes. “We have used a complex political system with considerable skill,” said Sir John, who then compared our recent constitutional experience to entering the pole vault when the bar is raised to world-record level.

In view of the considerable interest shown in Scotland by countries all over the world, Sir John suggested we should use it in a number of ways:

Sir John also emphasised how important it was to be perceived as stable, since this has a major effect on potential investors.

According to Sir John, we should also look eastwards and “shift attention more towards our growing relationships in Asia rather than the traditional diaspora in North America,” in particular to China, whose leaders take such a strong interest in Scotland. The close links being formed at senior government level also open doors for others – e.g. agriculture, academia and business. The Scottish Qualifications Authority (SQA) has also formed close links with China, making it more receptive to relationships with Scottish universities.

The Union also benefits from improved perceptions of Scotland, Sir John said. By embedding an official Scottish presence in our embassies in Washington, Beijing and Brussels, we create new opportunities for everyone and demonstrate how we can work with the Uk Government to our mutual advantage.

Finally, Sir John said that in order to “see ourselves as others see us,” we should not underestimate how much our stock has risen round the world, since devolution – and how important it is to seize the opportunities created by this improved perception.

Could Scotland become part of a federal UK in future?

“I said I would refrain from constitutional speculation. There is no denying that a federal solution would be a convenient way of dealing with a number of issues (including the so-called ‘English problem’) but it would not be trouble-free and people in countries such as Australia are beginning to question the stability of the settlement embodied in their federal model. On balance, I think a federal solution is unlikely”.

How do countries collaborate and compete with each other at the same time?

Scotland has an export-led economy but we are in an inconvenient geographic location and to boost exports over the long term we need to build trust and affinity with other countries, rather than focus on short-term issues such as competition on financial incentives. “We need to refresh our memories about the need for integrity,” and take advantage of our cultural values – e.g., like the Nordic countries, we regard a handshake as a binding contract.

Which countries scored below and above “59.67” (see above) on the Index?

Our score is much the same as in previous years but we are creeping up the table and ahead of many other much bigger countries. Only the top ten are published . These are: the United States, Germany, France, the UK, Japan, Canada, Italy, Switzerland, Australia and Sweden.

How do the English perceive us – especially in view of different policies on health and social care?

“Stunning good news” – the English like us more than those surveyed in any other country and place us fifth in the world. “Our ability to innovate did not start with devolution.”

Parts of the business community are very outward-looking and our universities are holding their own in the way they explore collaboration with institutions in other countries, but in general Scotland is not outward-looking, and is too preoccupied with the internal debate.

How does Scotland rate in terms of functioning government, respect for the legal system and accountability? Were we lucky that devolution happened at a time when we had a benign spending environment and a strong welfare state? And what is the risk of destabilising this settlement?

“It has been a longstanding puzzle to me that the senior Chinese leadership takes such an interest in Scotland; more than other countries, so there must be something of value to find here. It is also a puzzle to others that we made the change when the economy was getting better, not worse. Constitutional change is more likely when there is civil disruption, in challenging economic times, so we were fortunate that devolution was born at a time of sustained public expenditure growth. It would be surprising if there were a significant diminution of support for the constitutional status quo because of the downturn, but it is not implausible that it will make people more cautious about constitutional issues”.

Was it not a big advantage that the Scottish Office already existed? And are we more adept at dealing with process than product – i.e. delivering something that matters?

It was a big advantage to inherit an existing (and highly flexible) civil service, but it should not be taken for granted that the bureaucracy can travel across the boundaries of constitutional change. We are beginning to talk publicly about failures to deliver. We are good at extracting value out of the familiar way of doing things, but we are also beginning to realise that conventional wisdom may not be the answer to the parts of the challenges which have proved intractable over several decades. There has to be an openness to different ways of doing things. We may have fallen short of expectations, but understanding that will help us to develop new approaches to unlock our potential.

What about our relationship to other countries such as Malawi?

There was a view that Scotland had a reputation for holding out its hand to take things rather than giving, and helping Malawi was a conscious attempt to change that perception and show our willingness to give of ourselves – our knowledge and experience, not just money. It is hugely important that Scotland wished so early on in the devolution era to demonstrate its outward-looking focus.

How can our universities reach out to other countries – what are their international calling cards?

There is a pressing need for stronger cooperation among our universities to engage with other countries. We must recognise that we are competing with other countries and institutions that out-punch us, but collectively our universities can have a more powerful selling point. They should also recognise that they are ideally placed to illuminate constitutional issues of widespread interest. “It is a source of frustration when an amateur such as myself has to elaborate this thesis, but the universities have not articulated this yet. The universities would benefit and make themselves a centre of interest if they put more energy into telling the story of where we have travelled.” 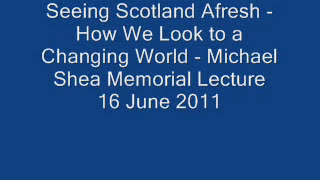