Scotland has an opportunity to realise its great renewable energy potential while developing other low carbon technologies and the required infrastructure. Jim McDonald argues that the nation could lead the world in creating an energy industry for the 21st Century.

The Scottish government has set ambitious targets for the nation’s energy provision. By 2011, 31 per cent of electricity will be from renewables; 50 per cent by 2020. Furthermore, there will be a 42 per cent carbon reduction by 2020; 80 per cent by 2050. Professor McDonald regards these targets as opportunities that Scotland has to capitalise on if it is to become one of the green powerhouses of Europe. This requires addressing Scotland’s energy base – renewables, hydrocarbons and nuclear power – as well as the means to distribute electricity.

Scotland has an opportunity to realise its great renewable energy potential while developing other low carbon technologies and the required infrastructure. Jim McDonald argued that the nation could lead the world in creating an energy industry for the 21st Century.

The Scottish government has set ambitious targets for the nation’s energy provision. By 2011, 31 per cent of electricity will be from renewables; 50 per cent by 2020. Furthermore, there will be a 42 per cent carbon reduction by 2020; 80 per cent by 2050. Professor McDonald regards these targets as opportunities that Scotland has to capitalise on if it is to become one of the green powerhouses of Europe. This requires addressing Scotland’s energy base – renewables, hydrocarbons and nuclear power – as well as the means to distribute electricity.

Professor McDonald said that Scotland could be particularly effective in developing renewable technologies such as onshore and offshore wind, marine, hydrogen and fuel cells, and biofuels. We have around 25 per cent of Europe’s wind energy resource, 10 per cent of its wave resource and 25 per cent of its tidal resource.

While Scotland’s peak electricity demand is about 6GW, there is an estimated 11.5GW of available onshore wind power, 25GW offshore wind, 10GW tidal and 14GW wave. Professor McDonald believes that much of this renewable resource would be exploitable over the next 20 years.

Scotland is “blessed” with its wind resource and has begun to exploit it. Professor McDonald lives a few miles from Europe’s largest onshore wind farm, Whitelees Windfarm near Glasgow, which produces 322MW peak output from 140 turbines, while there are plans for a larger development, the Clyde Wind Farm, which will approach 600MW. The largest commercially available turbines are 120 metres across and generate 5MW each, while a new generation capable of 10MW is on the horizon. At the other end of the scale are micro projects such as the eight 1.5KW turbines installed in the facia of The Lighthouse building in Glasgow.

Increasingly, the opportunity to deploy such innovative technology will be offshore. Scotland has some experience here. The Beatrice Wind Farm Demonstrator, off the northeast coast, was the world’s first deep water offshore wind installation, with two 5MW turbines.

There is significant potential in Scotland’s wave and tidal resources. The country already possesses an impressive research and development laboratory in the European Marine Energy Centre (EMEC) in Orkney. EMEC, which Professor McDonald regards as a “genuine jewel in our crown”, takes research and development to demonstration and deployment in the world’s only grid-connected wave and tidal test centre. There are more than a dozen devices currently being trialled, based on university know-how, but also involving innovative SMEs and some larger companies.

Professor McDonald estimated that the marine energy industry is roughly where the wind energy industry was 15 years ago, with remarkable projects such as the Pelamis wave energy converter leading the way. But he argued that to maintain a grip on this opportunity, scientific literacy has to be retained and translated into economic development.

Another significant area for energy is in electricity transmission and distribution. The UK Grid was conceived in 1926 and its 60-year-old infrastructure is reaching its capacity, with some of the challenges linked to renewables set to take it to the limits of its technical capability. A range of ideas to replace this is emerging, but it essentially boils down to major investment in infrastructure.

Power electronics would allow a multi-variable frequency power supply to take the place of the existing 50Hz, three-phase 240V supply that was the product of pre-war technology limitations. “It can completely change the way in which we deliver and transmit electrical energy,” Professor McDonald said.

The big push is towards the Smart grid. This would see large-scale grids dissolve into hundreds of smaller networks that could reconfigure into autonomous power islands. Power electronics and advanced control systems would optimise network security and capitalise on the available generation. Professor McDonald said the opportunity to redefine the grid for the 21st Century has to be grasped within the next five years.

The mismatch between the existing grid and the location of the onshore wind farm sites also suggests new infrastructure is needed. It will not be cheap. The 170-mile Beauly–Denny power line will cost £400 million. “If we’re going to rewire Scotland and add a potential subsea grid, we will need probably more than £10 billion of network investment over the next decade,” Professor McDonald said. But without such investment, he warned that Scotland will not have the transmission capacity to capitalise on its renewable resource.

Such networks might then be more fully linked to Ireland, the south of England and Scandinavia. France and Germany want a European supergrid that might be further connected into the Mediterranean, North Africa and then on to the Gulf states. The concept of a world grid has been proposed. Progress would be rapid, Professor McDonald said.

Another significant area is the built environment, focusing on demand-side management. This includes developing more effective use of energy, novel materials, sustainable architecture and even new ways of living. One concept is to distribute power around buildings through the Ethernet. This could supply low voltage DC at levels sufficient to power devices such as PCs.

The poor performance of buildings leads to significant waste of energy. Digital design could assess the feasibility of more advanced energy management systems. Building regulations might help drive this. “If we were a bit more demanding and ambitious about the types of specifications we are building to, we might move forward,” Professor McDonald said.

Other important energy issues include advances in technology around gas and oil, which Professor McDonald believed would be around for at least another generation. He also argued that nuclear power should remain part of Scotland’s energy mix, although without future investment, there will only be two working nuclear power stations in the country by 2020 and none by 2030.

Professor McDonald said there is an opportunity for Scotland to lead on carbon storage and sequestration demonstration projects, taking high-quality university research through to deployment, through initiatives such as the prospective Peterhead carbon capture and storage project. Such an industry could provide Scotland with 10–15 thousand jobs over the next decade.

If this approach was replicated across Scotland, Professor McDonald argued it would present Scotland as an innovation hub for the world “where we cannot only conceive of energy ideas but get to products that are ready to roll and support the growth of industry and the creation of jobs.”

Professor McDonald emphasised the need for a multidisciplinary approach, which is being championed by the Energy Technology Partnership (ETP), an alliance of Scottish universities that he chairs and co-directs. This includes not only science and engineering but also the social sciences to address the impact of these technologies on people.

The ETP covers many Scottish academic research groups that are pioneering different fields that could have a significant impact on Scotland’s energy future. Scotland’s research pools are already bringing together expertise from a great range of disciplines to tackle issues such as energy and climate change.

The concept of wind crofting, coined by the green energy pioneer Gordon Proven, is beginning to generate interest. This would involve rural communities harvesting the wind through distributed networks of 5–10KW turbines over several thousand acres. A low-cost DC network would connect farms and homes and, through a single grid interface, could have commercial value by selling surplus energy.

In an urban setting, Professor McDonald is currently involved in the Sustainable Glasgow initiative, which aims to make the city one of the most sustainable and low carbon cities in Europe. The creation of an integrated low-energy system would create jobs, reduce emissions and attract investment.

While he acknowledges that the recent lack of an agreement at the UN Framework Convention on Climate Change in Copenhagen was disappointing, Professor McDonald argued that there is a genuine opportunity for Scotland not only to become a low carbon country but also an international leader. This requires continued support for universities, developing new skills for the renewables industry, attracting investment and better integration of planning regulation and investment.

“We need to act now, Professor McDonald said. “Scotland has great energy resources but we’re not in a one-horse race – most of the rest of the world is looking to do this as well. We have a significant opportunity to realise the commercial value and policy targets by getting genuine partnership between Government, the private sector and universities and colleges. We’re big enough to be significant in Scotland and small enough to be practical about realising this.”

One audience member asked why turbine blades are so thin. Professor McDonald said the design is the product of aerodynamic and control issues. However, there are a number of radically different prototype blades that are currently being tested.

Another person suggested that the mismatch between the times when wind farms produce power and times when electricity is most needed means that large-scale energy storage is vital. Professor McDonald said the issue is not as problematic as it sounds and that to some degree wind power generation is predictable. He said that there are many small-scale solutions, but the development of large-scale storage technology would “change the game”.

One audience member asked how Scotland could afford new power lines. Professor McDonald said a recent report by the regulator Ofgem had effectively suggested renationalising the grid, while investors might be tempted by a relatively low-risk investment. 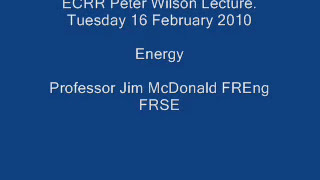 The RSE invests £1.8M in the future of research
Response to Scottish Funding Council on Research Pooling
The RSE launches two funding initiatives to kick-start academic research in response to pandemic and climate change
Manage Cookie Consent
We use cookies to optimise our website and our service.
Manage options Manage services Manage vendors Read more about these purposes
Preferences
{title} {title} {title}