Science as a public enterprise

Is there a need for a revolution in the way that science is done? Science thrives on the open exchange of ideas and data but needs to revisit how these principles apply in the digital age and against the rising expectation of transparency and increased access to scientists’ work from colleagues and the public. What should the principle of openness be?

The Royal Society, London is grappling with these issues in an ongoing study: Science as a public enterprise.

Science as a public enterprise

SCIENCE AND THE MODERN WORLD

The increased pace of application of scientific discovery over the last half-century has been breathtaking. We have put satellites into orbit around the Earth and probed deep into the solar system; we have discovered the chemical processes that animate living things and learned to manipulate them; we have developed computers that complete calculations in fractions of a second that would previously have taken months or been impossible; we can manipulate individual atoms, and are beginning to understand how they are assembled into complex living organisms; and we have found ways of storing, manipulating and transmitting information that far surpass anything previously dreamed of.

Such discoveries have removed geographic barriers; put immense power to access, manipulate and communicate information into the hands of ordinary citizens; and created the potential to address hitherto intractable diseases. At the same time they have alerted us to the magnitude of the human assault on the natural systems of the planet, and with the
computational power that science has put into our hands, we have the capacity to assess how they might evolve.

Wherever we look, science has changed, is changing and will continue to change the way we live, and fundamentally influence the way we prepare for the future. It is now woven into the fabric of human culture.

Notwithstanding this roll-call of achievement, the context within which science is done is changing, and the scientific enterprise needs to adapt to it.

THE IMPACT OF DIGITAL TECHNOLOGIES

30 years ago, in most areas of science, it was possible to publish a complete description of a piece of scientific work, including all experimental details, the resultant data, an assessment of uncertainties, and the details of analysis, that would permit anyone to validate the data and repeat the experiment. New digital methods of data collection and storage are now able to create such vast datasets that no journal could conceivably accept a full description of an experiment analogous to that of 30 years before. Unless a great amount of time is devoted to describing an experiment in immense detail (crafting the “meta-data”) and in archiving the full dataset, it has become very difficult to replicate it faithfully. The published paper merely becomes an advertisement for the science: the real science lies in the underlying data.

We have reached a point where replication and re-use of data, that have been fundamental to the progress of science, are being undermined unless we can make the underlying data quickly available and useable by other scientists. There is a strong imperative for a regime of open data, to ensure that scientific data are made available to others.

A further impact of digital technologies has been in the use of computers to investigate complex coupled systems in ways that were hitherto impossible. It has added a third basic tool to the armoury of science, that of computer simulation, to the classical tools of observation and theory. But this compounds the problem of reproducibility. The computer code of  researchers are relatively inaccessible, even to experts in the same field. The computational manipulation is contained in a black box, so that it is often extremely difficult to state with clarity and rigour why the results are as they are. In a world where we are now able, for the first time, to analyse truly complex problems, and where the policies derived from such
analyses can impinge so strongly on society, finding ways to unlock model construction and operation to inspection is a high priority.

The pressure for change comes not only from powerful digital technologies, but also from society. As old habits of deference fade, growing numbers of citizens are averse to accepting ex cathedra statements from scientists, and ubiquitous digital media offer a powerful means for the public to interrogate, question and reanalyse scientific priorities, evidence and conclusions.

Though it has its difficulties, the developing vigorous engagement by many citizens is something to which the scientific enterprise must adapt. Arguably it is a realisation, though in a
more democratic and boisterous form, of the hopes of the Royal Society’s report on The Public Understanding of Science in 1985, which is widely held to mark the birth of a movement
towards public engagement with science in Britain.

Given the impact that science increasingly has on the lives of citizens, and the fact that much is paid for from the public purse, it is important that science is not, and is not seen to be, a
private enterprise, conducted behind the closed doors of laboratories, but a public enterprise to understand better the world we live in and our place in it.

Some of the debate involving citizen scientists is excessively polarised, characterised by a stand-off across a gulf that is rarely bridged by reasoned discourse. Each side portrays itself as the standard bearer of reason, and accuses the other of an irrational, quasi-religious belief, often underlain by self-interested motives, or even by global conspiracy. But many interventions generate tough and illuminating questions and expose important errors and elisions. At the same time, novel initiatives are being created that bridge between citizen and
professional scientists in areas such as astrophysics, climate prediction and malaria control, and many individuals create incisive and often highly creative blogs on specific issues. The
purpose must be to ensure that the public can see, grasp, and take part in scientific research to a much greater extent than has been possible hitherto.

It is in this context that the Royal Society is undertaking an inquiry, due to be completed by Spring 2012, Science as a public enterprise: opening up scientific information. Its purpose is not to cover the whole domain of scientific governance and public engagement, but to recognise that opening up scientific information is a vital first step in ensuring that scientific results and analysis are more accessible both to other scientists and to members of the public who have developed specialist knowledge.

For science funded from public sources, exceptions should clearly apply to scientific work that has implications for national security. The degree to which personalised information,
gathered for example through medical or social science investigations, is exempted, can also be problematic. To what extent, for example, should the public health benefits that might accrue from the use of population health records, outweigh an individual’s desire for privacy? Is too high a price being paid by people collectively in order to protect the privacy of people individually through inappropriate data protection legislation, including the EU data protection directive?

At first sight, there might seem to be a clear limit to the opening up of scientific information according to whether the science is funded from public or private sources. In practice, there are many areas that are more complex. There is a strong argument, for example, where the activities of private companies involve a public hazard, as in the recent examples of  Fukushima and Deep Water Horizon, that the scientific safety cases should be publicly available. If there is shared hazard, should there not also be shared information?

A powerful example of the benefit of transgressing the public/private divide comes from clinical trials, to which the public freely contribute, and where great potential for benefit is unrealised. Persistent failures to place even summary results of such trials in the public domain have led to a bias that seriously undermines their immense potential for public benefit. The way that sharing data can lead to healthcare improvements has been shown by the meta-analysis of the raw data from clinical trials on the effects of aspirin in the prevention of cardiovascular disease which was able to use data from 95,000 patients. The extension of such processes offers an opportunity to use data from routine clinical use of drugs to provide high quality pharmacovigilance on a hitherto unprecedented scale.

Making scientific results available in a useable form both to professional scientists and the public would be expensive, and would demand either additional funding or a shift in the balance of the scientific effort.

Achieving change requires a change in the priorities of funders of science, and of scientists themselves and their institutions. Scientists have tended to regard their data as personal property. After all, it is they who worked hard to generate it, and ownership has never been seriously challenged.

How can the systems of acknowledgement, reward, professional advancement, and institutional assessment of science be evolved to properly recognise contributions other than the traditional peer reviewed paper? One way forward might be to recognise the provision and archiving of data and computer code in assessment of research, for example the Research
Excellence Framework for university research.

WHAT DOES THE PUBLIC WANT?

While the issues above should concern policymakers, scientists and interested citizens, what does the wider public want from the science that it indirectly funds? A recent survey indicated that many do not feel informed about science, but it seems that the vast majority have no desire to become involved in scientific processes. They want reassurance that there are efficient processes that will progressively eliminate error and reduce uncertainty. But these results are only indicative, which is why the Royal Society inquiry is considering further public dialogue processes, asking the public what it wants of its science. 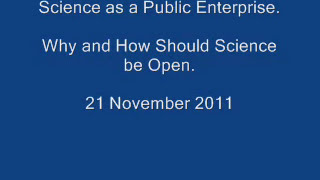 RSE awards half a million pounds in research funding to benefit Scotland’s cultural, economic and social wellbeing
The RSE launches two funding initiatives to kick-start academic research in response to pandemic and climate change
Report into citizen-centred approaches to wellbeing published by the RSE
Manage Cookie Consent
We use cookies to optimise our website and our service.
Manage options Manage services Manage vendors Read more about these purposes
Preferences
{title} {title} {title}