Running out of land: A new global challenge

A talk given by Alan Belward, Head of Land Resource Management at the European Commission’s Institute for Environment and Sustainability, Ispra, Italy.

Land is not often considered a non-renewable resource, but it should be. The land meets most food, fuel and fibre needs of our rapidly growing human population and shapes Earth’s climate too… competition for this finite resource is fierce. Satellites provide a unique vantage point from which to determine how, when and where land resources change. This talk introduced some of the policies that impact global land use and highlighted the role of Earth-imaging satellites in responding to these.

Running out of Land – a New Global Challenge Q&A

Land is essential for food, fuel, habitation and many other needs. The President of the RSE, Sir John Arbuthnott, welcomed Dr Alan Belward from the European Commission’s Joint Research Centre, to discuss how pressure on this vital resource is intensifying. Sir John pointed to the recent flooding in England as showing how dramatic land loss can be and underlining the urgent need for effective strategies to preserve and make the best use of what we have. Dr Belward explored how Earth-imaging satellites are enabling us to monitor what is happening and are bringing hope that we can mitigate the damage.

Accurate mapping is critical to monitoring the health of the Earth’s land resources and to making sound decisions concerning resource management. Over the centuries, we have developed increasingly sophisticated methods of mapping the world around us and showing how, when and where land resources are being used and how this is changing.

The 1850s brought a major advance, when the use of balloon-mounted cameras heralded a new era of aerial photography. According to Dr Belward, the launch of Sputnik in 1957, and the ‘Space Race’ which ensued (leading to a total of 7,080 spacecraft launches so far), brought a new revolution in mapping, as it rapidly became possible to use radar, photography and other techniques to generate accurate images of the Earth’s surface. These have allowed the increasingly detailed observation of the changes taking place on even the smallest areas of land – some satellites can now follow deforestation down to the level of individual trees.

Europe is at the leading edge of research into land use, thanks to the Copernicus Space programme. This involves putting a series of highly sophisticated satellites into orbit. Called Sentinel 1, 2 and 3, these will allow close study of the planet’s land, oceans, climate and atmosphere. These data will be shared freely across the world, making them an invaluable scientific resource for humanity.

There are currently 97 polar-orbiting Earth-imaging satellites, invested in by 32 countries, all of which recognise the strategic need to understand what is happening within their own and other territories. The exploitation of land for fuel provides one example of why this is imperative. Dr Belward said: “The land has to feed us … but the land is also a fundamental supplier of energy … 600 million people in Africa, if they want to cook something, have to set fire to a bit of wood, they have no other energy source, and that requires land. Then there’s timber and fibre for building and paper and foundations, for roads, for houses. There’s a fundamental competition between land for food and for fuel, building and fibre.”

As two thirds of our planet’s surface is water, and substantial areas of land are barren or unproductive, only around 20% of the Earth is available to cater for these competing needs. The natural vegetation in that fifth of the planet is also essential to our climate. Human activities have changed the vegetation cover dramatically over the years, and indeed continue to do so. Land use and land use change is a significant contributing factor in the increase in carbon dioxide and the advance of man-made climate change. At the same time, there is a dramatic loss of biodiversity, including of the many creatures which live within the soil itself, as we turn land over to agriculture – a system dominated by around 30 plant species and four animals (pigs, chicken, sheep and cattle).

As land is a reservoir of biodiversity, we must know how much of it needs to be protected. In 2010, the Conference of the Parties to the Convention on Biological Diversity saw an intergovernmental agreement to increase the area of protected land from 12% to 17%. This raises a host of challenges, which Dr Belward and his colleagues are attempting to address, such as which land should be given protection and whether existing measures are working.

Protection has to be balanced with the reality that 99% of our calories come from the land and that less than 18% of land is suitable for sustainable intensive agriculture, and parts of that are at risk from climate change. Just one of the threats to our food security comes from urbanisation, which has a threefold impact. First, building takes away agricultural land, with 1,000km² a year being lost in Europe alone. Secondly, population migration means there are fewer farmers. Thirdly, the new urban dwellers usually earn more and buy richer foodstuffs, such as meat, which takes much more land to produce an equivalent number of calories.

According to Dr Belward, some of the attempts to address the need for food security have far-reaching consequences. Saudi Arabia has gone to immense lengths to create productive land in desert areas. This consumes huge quantities of fossil water. He said: “They are using almost 600,000 gallons of water a day per field and there are 2,500 fields. That’s 1,500 million gallons – enough for every man, woman and child in Scotland to have 14.1 baths a day.”

In 2012, a political commitment to protect and nurture land was made by 140 governments. The European Commission has translated this into an action plan which Dr Belward’s team is playing a valuable role in implementing by:

Dr Belward showed how this work is demonstrating the speed of land loss by using archived and new satellite imagery to follow change at thousands of preselected points. One of these showed an area of Africa that was largely natural in the 1970s and 1980s. A few fields appeared in the 1990s. By 2013, all the available wild land was gone. By the same token, it showed that a neighbouring area of protected land was being well managed, with no illegal farming. Data from each point is being aggregated to show the situation across entire continents – the results in Africa show increased losses and a decrease in regeneration regions. With the fastest growing human population in the world, some 50,000km² of its natural vegetation is vanishing each year.

“The pressure is enormous and this can lead to food insecurity, conflict and migration. Issues such as land grabbing can also exacerbate the situation” said Dr Belward.

Turning to deforestation, he said that the new Sentinel satellites will prove invaluable, as they will provide frequent images in great detail. This is vital because, for example, they provide evidence of forest disturbance, allowing the monitoring of where logging is taking place and its extent. One practical benefit is in combatting illegal logging by making it possible to monitor areas where governments may be paid to keep forests intact. This is part of a wider process whereby Europe is seeking to exercise effective control over where logs come from.

However, the evidence Dr Belward’s colleagues have built up shows that, on a global level, some 5.9 million hectares a year of humid forests are being lost to building, agriculture, logging, mining, fuelwood, plantations and industry. This equates to the loss of an area of forest the size of the Stade de France (the French national rugby stadium) every three seconds or so.

Summing up, he said “Things are happening rapidly, so I believe that global land resource monitoring is a scientific imperative”. This is partly because, despite an international commitment to achieve a land degradation-neutral world, there is currently no measure in place of what this involves. Only through scientific study and mapping of the type of work being carried out by Dr Belward and his colleagues, can such a measure be agreed and enforced. This is critical, as land lost cannot be replaced, land we degrade cannot be easily restored and we must learn to produce more whilst polluting less. He warned that action must be taken fast, because with the world population having passed seven billion and growing by 155 a minute, time is against us.

What evidence is there of international co-operation to tackle land loss?

According to Dr Belward, the fact that governments have come together to give a commitment to change, and advances such as the world atlas of desertification, are both examples of a determination to act.

Is there an imbalance between conservation policy and land management, with poor management leading to the loss of good land?

Within the Copernicus programme, there is an emergency management project which aims to create the necessary evidence base to assure better management.

The driving force behind land loss is human population increase; what is being done to prevent expansion and encourage reduction?

Right now, said Dr Belward, we need to put faith in science and innovation to reduce the impact we are having on the land and to increase yields and to manage soil properly.

Are there any quick wins we can get to start improving the situation?

Dr Belward said he puts a lot of faith in the UN’s REDD (reducing emissions from deforestation and forest degradation) programme, which aims to pay governments to protect forest stock.

The economic impact of land degradation is enormous; what can be done in mitigation?

Dr Belward said there are some quite straightforward measures that can be taken. One is to sell fertiliser to Africa in 5kg rather than 50kg bags. At present, the large bags spend months on docksides, losing their potency, and then the contents are parcelled up in ever-smaller amounts “cut”, like drugs, with other substances. By the time it reaches the subsistence farmer, it can be thoroughly degraded. 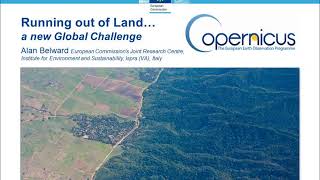