Home » Resources » Video » Removing the fossil from the fuel

Removing the fossil from the fuel

Fossil fuels – coal, gas and oil produced millions of years ago from decomposed life dense with carbon and hydrogen – are vital for modern life. Despite the growth of renewable energy technology, 80% of the energy used still comes from fossil fuels. So does half of the food that we eat and the pharmaceuticals that we consume.

The race is on to develop cleaner energy systems. Professor Lee Cronin, Regius Chair of Chemistry, University of Glasgow describes his work at the fundamental, device and system level to explore new routes to solar fuels.

Removing the Fossil from Fuel Q&A

Fundamental science was at the heart of what Lee Cronin wanted to talk about this evening but he made clear from the start that although this was his touchstone it should be accompanied by technological breakthroughs with real outcomes. What bigger challenge, in this respect, could there be, he asked his audience, than working out how mankind can survive to the end of this century while continuing to guzzle the Earth’s finite fossil fuel resources? It is possible that we could be changing the climate so much and so quickly that life for our children will become impossible. “That’s terrifying,” he declared.

First, we have to acknowledge the extent of the problem, Professor Cronin said, and that there are tough questions to answer. Fossil fuels – coal, gas and oil produced millions of years ago from decomposed life dense with carbon and hydrogen – are vital for modern life. Despite the growth of renewable energy technology, 80% of the energy used still comes from fossil fuels. So does half of the food that we eat and the pharmaceuticals that we consume. If we stop using fossil fuels, who would get to starve, who would not get treatment, Professor Cronin asked?

Central to the problem is that our use of fossil fuels is vast. Globally, over the last century, we have used 1.6 trillion barrels of oil, immense tonnages of coal and 131 trillion cubic metres of gas. However, the consequence of burning fossil fuels at this rate is that the atmospheric content of CO2 is rising. Predictions that we would reach a “magic watershed” of 400 ppm by 2015 – above which the consequences are unknown – have been reached right on time, Professor Cronin demonstrated.

Cutting back on global annual energy use of 17 terawatts, however, requires consensus if we are to avoid catastrophic change. Yet even some western democracies, such as Canada or Australia, refuse to recognise climate change as a problem. “This is a very interesting fact that we have to deal with politically,” Professor Cronin said. There are contradictions closer to home too. While Scotland has abundant supplies of renewable power, it also has oil – the “black gold”. Yet Scottish politicians also appear to be unsure as to which route to follow in the future.

The world now has a complicated energy mix that cannot be changed overnight. But one thing for sure, Professor Cronin argued, is that whether you are a climate change believer or denier, fossil fuels will eventually run out and civilisation may cease to exist, unless we come up with alternatives. It is the perfect quandary, in that we are addicted to a fuel that is not only damaging the planet but is also running out, he said. There are suggested solutions, such as bio-fuels. However, planting enough crops to meet our needs would require 30% of our land mass to be covered, and the resulting energy could not, at present, be stored.

Are there chemical solutions, Professor Cronin asked? For instance, can we use the natural, Sun-driven chemical process of photosynthesis to arrive at least at a partial answer? Photosynthesis takes CO2, turns it into sugars, fixes the carbon and produces oxygen as a by-product. It is how we breathe and this process has been performed “wonderfully” for at least two billion years by molecular machines. So, to harness that solar power as a stepping stone to a new energy economy, we should think about converting sunlight into fuel through photosynthesis, Professor Cronin suggested.

What is needed is a new “type of leaf” that allows us to carry out a kind of inorganic photosynthesis. That is why his team at Glasgow University decided to take a new look at the process of water splitting, which is used to separate hydrogen and oxygen, to explore the potential of producing hydrogen, in abundance, as a fuel. Hydrogen gas can be burned as a fuel without producing climate-changing emissions. However, although oxygen and hydrogen atoms can be split by running electricity through water in an electrolyser, the process runs on fossil-fuel-generated power and carries the serious risk of explosion. Professor Cronin explained how he had challenged his team to develop a two-step, biology-inspired process that replicates the way plants use the Sun’s energy to split water molecules into hydrogen and oxygen at separate times and at separate physical locations.

Despite initial scepticism from scientific colleagues, they have done so by changing the molecular structure of the atoms, using a metal oxide and experimenting with different voltages. Using their method, only oxygen is released in the first instance, while the hydrogen remains behind to be released when convenient. The team has, in effect, created an electro-chemical, hydro-electric dam, in which – as in conventional hydro-electric systems – power can be used when needed. Following laboratory observations, the results have been published and “everyone understands what we are getting at,” Professor Cronin said.

The new method is promising because it is by far the fastest way of producing hydrogen from a renewable source “bar none”, Professor Cronin explained; there is no risk of explosion and, potentially, it could turn out to be a cheap and efficient technology. “We have gone from science discovery to lab test-rig and I am very proud of that,” Professor Cronin said. “We didn’t give up when everyone said it was nonsense.” The next stage is getting the technology replicated by other scientists on a bigger scale to ensure it works reliably and is able to deliver the right amount of gas. A spin-off company has now been formed to develop the new process and money is being raised to support it.

Could it be a stepping stone to an even bigger energy solution, however? What really excites him, Professor Cronin said, is the prospect of integration, in that Scotland has plentiful supplies of offshore wind but getting electricity ashore is proving to be difficult and expensive. Instead, there is a scenario in which offshore turbines could produce hydrogen, which could then be piped ashore through the existing gas pipeline network. This technological solution is already being actively considered for use in Germany. He envisages turbines producing electricity, which is then fed through an electrolyser to produce hydrogen. That can then be stored in liquid, or in another vessel, for future use; i.e. storing the wind energy chemically as a fuel. Then the hydrogen can be used to create electricity that can be fed back into the national grid, used as fuel or used by industries which require the pure form of the gas.

By way of conclusion, Professor Cronin said that scientists have to take gambles to come up with solutions to this “terrifying” problem. Their job is to figure out what is “doable.” In the meantime, we all have to ask ourselves some tough questions. Can we really stop using fossil fuels fast enough? Are politicians really committed to it, or is it just embedded in their five-year political cycle? What changes are we all willing to make to prevent the end of life on Earth? “It may not happen; I don’t know,” he said. But while gambling in scientific terms is one thing, gambling with the environment is another.

Do we have enough energy to mine the metals, such as platinum, that you are talking about using?

The dream is to make a cell that is all carbon with minimum metal, maybe cobalt, or nickel or iron. If iron, then the answer is almost certainly yes. One of the things I didn’t touch on is the question of scale. A global scale solution will take a long time and that’s why we need these hard discussions now.

I am an engineer. You are at proof-of-concept stage. How big would your electrolysing plant have to be to produce 100 megawatts?

The way that electrolytes work is that you have a stack of them. A 250 kilowatt stack is about the size of that lectern over there. You can do the maths.

If hydrogen is pumped away from offshore turbines through a pipeline, what happens to the oxygen?

You just vent the oxygen off.

If this becomes the principal source of fuel, aren’t we going to be injecting an enormous amount of oxygen into the atmosphere?

What we are proposing to do is solve a specific problem by making non-fossil-fuel hydrogen available. Right now, to feed the world you need to use fossil fuel. Electrolysis is an intermediate solution. Storage of renewable energy is a problem. This is about making “marginal” wind accessible, because we have this low-power solution. This might allow us to store wind energy and produce high-purity hydrogen, for which there is a demand.

Post-lecture comment – The speaker subsequently added: The hydrogen will eventually recombine with the oxygen when it is used as a fuel so releasing the oxygen to the atmosphere is not a problem. We are currently burning fossil fuels at such a rate, and producing so much CO2, that I would like to know if our oxygen levels are going down. If we get to a point where we are producing a lot of oxygen then I will get excited because I will know our technology works.

In taking this into actuality 24/7, are there enough investors out there to put their money where your mouth is?

I think we will get that investment pretty quickly. The reasons are quite clear. We are faster. We are also reducing the amount of platinum needed by 30%. It can also run at lower energy densities, so it doesn’t have to be blowing a gale for us to be able to extract energy. There are a whole bunch of things that make this technology competitive. In terms of commercial backing, it will save money so there will be interest.

If your idea is hydrogen fuel as an alternative, what about the safety issues?

I am not sure if hydrogen as a fuel is the way forward. What we want to do is produce cheaper hydrogen to kick start renewables. The second point is that I want diesel or petrol in my car but I want it be from non-fossil fuels. But that is a long way away. We have to do this in steps and the first step is making hydrogen cheaper. There will need to be risk assessment. Hydrogen is a lot safer than you think, especially if oxygen is kept away. 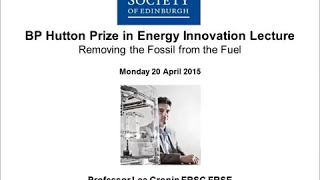