Religion Unbound: Ideals and powers from Cicero to King

Professor Jeffrey Stout explores how our understanding of religion and politics might need to change if the religious voices in the egalitarian movements were given their due. Recorded while Professor Stout was in Scotland to deliver the Gifford series of lectures at the University of Edinburgh.

Religion Unbound: Ideals and powers from Cicero to King Q&A

One of contemporary philosophy’s ‘superstars’, Professor Jeffrey Stout, was in Scotland to deliver the Gifford series of lectures at the University of Edinburgh. Alongside three distinguished American colleagues, he took time out for a public forum at the RSE to explore one of his central themes – how would our understanding of religion and politics need to change if the religious voices in the egalitarian movements were given their due? He took as his starting point and framework the ‘Great Separation Story’, a phrase he said he had borrowed from Mark Lilla’s book, The Stillborn God.

The ‘Great Separation’ in Lilla’s treatise refers to the sharp distinction made between politics and God proclaimed by the great English philosopher, Thomas Hobbes in the 17th Century, as the western world moved away from the mysticism of the Middle Ages towards an increasingly secular future in which the State began to play a bigger role in the lives of the general population than the Church. According to the ‘Story’, religion and politics were not always separated, Professor Stout said, but became so wherever enlightenment liberalism became dominant.

So-called liberals have, ever since, celebrated the separation as a triumph of reason and freedom over superstition and tradition. However, this ‘victory’ is now imperilled in some people’s eyes by a worrying return of religion in the age of Ayatollah Khomeini, Pope John Paul II, the 9/11 terrorist attack by Muslim extremists, the terrorist attack on the Charlie Hebdo office in Paris and religiously-legitimised nationalism in its current forms in many countries.

Opponents of liberalism maintain that “things used to be better” prior to the ‘Separation’, as the liberal split produced the modern concept of religion as essentially private. That is fuelling current attempts to overthrow the liberal political order with its secular reason, its levelling of excellence, its exodus from virtue, its privatisation, or evisceration, of religion and its reproduction of possessive, rights-demanding, atomistic subjects, Professor Stout argued.

But was the ‘Great Separation’ really such a clear division between religion and politics? Professor Stout said he has been challenging all stages of the ‘Story’ and has no more sympathy for the anti-liberal version than for the liberal triumphalist one. Even the ambivalent, and unusually subtle, version developed in Charles Taylor’s Gifford lectures – published under the title A Secular Age – drastically underplays the extent of religious conflict and uncertainty in Europe before 1500. Filling in the pre-modern phase of the politics and religion story in an historically responsible way exposes a great deal of political and theological conflict even before this period. A recurring debate about setting religion loose from the bounds of tyranny and oppression goes back centuries earlier, as does talk of consensual governance and accountability as checks on arbitrary power.

The later egalitarian freedom movements fit into this pattern, Professor Stout explained. He presents abolitionism – the movement to end slavery – and subsequent democratic freedom movements as the result of an egalitarian modification of a struggle for security from domination; and so a continuous development of a tradition stretching back to ancient democracy, republicanism and Cicero. Once the egalitarian freedom movements are freed from the ‘Great Separation Story’, the insistence of many modern freedom fighters that they are religiously motivated in their political work and firmly opposed to secularism can be acknowledged. This should permit us to see, Professor Stout argued, that the ‘Great Separation Story’ is an ocular illusion suffered by individuals who spend their lives in the bureaucracies of universities where the ‘Story’ and the politics of lowered stakes have held sway.

So to say that there has been a ‘Great Separation’ of religion from politics is to ignore the ideas and organisational patterns of the egalitarian freedom movements since abolitionism. It is also to adopt a grossly oversimplified account of what happened in the various European enlightenments. In the US, it helped open the space in which free religious expression, freedom of speech and freedom of assembly coalesced in democratic reform movements such as abolitionism, feminism and civil rights. These are all reforms not simply about tinkering with policy, but which brought significant alteration of the balance of power in society.

Given that these movements cover the entire period since David Hume began writing philosophy in the 18th Century, it does not make sense to say that religion has recently returned, Professor Stout insisted.

He concluded that the ‘Great Separation’ is either false or severely misleading in all versions. That is not to say that the egalitarian freedom movements are counter evidence to the ‘Great Separation Story’, but they are extensions of a heritage with which he, and his audience, might reasonably identify.

The panel was then invited to respond to Professor Stout’s comments.

Professor Bowlin said he wanted to ask his friend and colleague three questions. The first was about the purpose of lectureship, particularly in relation to teaching students. There are many ‘grand narratives’ of religion, ethics and politics on offer, some of decline and some of ascendancy. They should not just exist to ‘get the facts right’, they should be used to change the habits and sentiments of young people. Lectures should be used to motivate young people to make change in turn.

The second was about friendship and the relationship between the anti-domination politics that Professor Stout is exploring and friendship. The third related to the examples of “persons to emulate” found in the Gifford Lectures that Professor Stout had given. Does he think that his own lectures, his own vocation as a teacher, is in itself offering a figure for emulation? Is he becoming part of the narrative?

Professor Davis said he adheres to the notion that the language of Aristotle remains the “best way” to interpret our lives together. Now that he is ‘old’, he is waiting for a rebirth of the wonders of pragmatism and for everyone else to catch up. He sees himself as Raymond Chandler’s jaded private investigator, a ‘hired gun’ ready to challenge anyone who questions the pragmatist way. Above all, he sees himself as an outsider who enjoys “picking off” the latest philosophical movement. However, he is now ready to embrace Professor Stout’s version of history and his reassessment of political theory. For the first time in his life he is ready to join a group.

Professor West said he first met Professor Stout 44 years ago and they had become soul mates. At a time when, not only in the US, neo-fascism and similar movements are gaining ground, figures such as Professor Stout are needed to provide moral leadership. “We live in a time of market-driven celebrity, but Jeff is talking about moral-led exemplarity,” he said. As a Christian, he said he admires Professor Stout’s “old style questing for truth” even though he is a “secular” brother. He has great sensitivity to egalitarian movements such as the struggle against white supremacy which gave rise to Martin Luther King. It is people such as him, who find their voice, who provide an example by setting out to leave the world a better place than they found it. It is by being inclusive that ideals become a force for change. As Ralph Waldo Emerson wrote, “the true romance which the world exists to realise, will be the transformation of genius into practical power.”

Addressing his colleagues, Professor Stout said grand narratives – many of which he had spent his life criticising – all depend on context. His lecture series had dealt with a “grand sweep” of history – from Cicero to King – but ended with King because he has been trying to understand the human rights leader’s letter from Birmingham jail in 1963. The letter had meant a great deal to him when, as a young man, he had first read it, and it had had an influence on his life and career. What he has learned from the process in later years is that full contextualisation depends on understanding where King had come from, what had moulded him and what he was thinking at that time. Ironically, although King’s teachings on human rights were seen as anti-American, they were freely available in the Soviet Union and its satellites, precisely because, despite their global message, they were construed as anti-American.

On friendship, Professor Stout turned to Emerson and a line: “I would like to know how to make friends well.” It could be interpreted in several ways, depending on the emphasis put on certain words. He suggested, “I would such as to know how to make friends WELL.” In his lectures, he talks about friendships of “justice” that exist across geographical boundaries. Abolition was achieved through a network of friendships linked by a sense of justice. King was talking of the same thing with his “beloved community”, a clear example of exemplarity.

Did he think his lectures were a form of exemplarity, of example setting? Increasingly, yes. Emerson had helped him to realise this when talking about “great transformation” at the individual and societal level. That might simply mean joining a tightly-knit group of friends who shared the same beliefs, or attending a protest, but it could lead to change.

Cornel West mentioned transformation of genius into practical power, Professor Stout said. He had included Emerson’s line in one of his works as a footnote and what that had revealed was the birth of American pragmatism. In Emerson’s social world, there were people arguing against slavery but who had little or no practical effect on it. What would it be like to have people committed to ideals but also capable of creating a material practice that produces change? “That’s the central question of the pragmatic tradition, as I think Cornel rightly understands it,” Professor Stout concluded.

Professor West, in relation to American pragmatism, what mark out of 10 would you give Barack Obama?

Professor West: 4.5. We need to have more than a man of colour with a lovely wife and lovely children in the White House, which was built by black slaves. Whatever his colour, he is still head of an American empire. His healthcare reforms were a bonanza for private healthcare companies and pharmaceutical companies; although he said he would tackle Wall Street excess, no Wall Street executives were jailed, despite widespread criminality; he bombed Muslim countries while picking up the Nobel Peace Prize. Actually, he is lucky to get 4.5.

Should there be a consultative forum of all faiths, associated with the political process, to encourage the peaceful majority and friendship between religions?

Professor Dowlin: In the US, we live in age of disestablishment. We had a cold war political establishment with a religious establishment giving it legitimacy. The cold war establishment started to decay in the 1970s and nothing has replaced it. The problem is that when states do this, it doesn’t go well. I have been studying how grassroots actions build these relationships. Obama had a religious outreach programme, but it was entirely to people not engaged in democratic relationship building. That reinforced the depoliticisation of religious communities. It needs to come from the ground up if it is to be democratically wholesome. 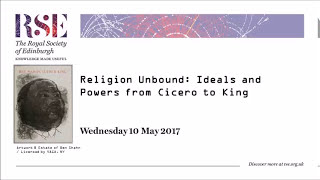