Home » Resources » Video » A question of chemistry? The role of the composer and librettist in the creation of opera

A question of chemistry? The role of the composer and librettist in the creation of opera

What is the role of a 21st Century opera company? To present tried and tested classics or to nurture homegrown talent and explore the evolution of the art form through the creation of new opera? Scottish Opera had the latter as its goal in bringing together new teams of writers and composers as part of Five:15 Operas Made in Scotland. Composer Stuart MacRae and author Louise Welsh are joined by music journalist Andrew Clark in an examination of the characteristics of a successful opera partnership. 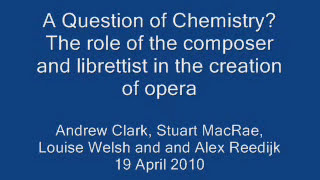