Home » Resources » Video » The past as propaganda: The Mongol ‘world history’

The past as propaganda: The Mongol ‘world history’

The fragmentary copy of Rashid al-Din’s World History held in the University of Edinburgh’s Library is of extreme rarity, huge size, lavish illustration and very early date (1314). It is perhaps the world’s most valuable illustrated Islamic manuscript. This lecture explores its art-historical significance, highlighting its multi-racial and multi-confessional flavour, with Christian, Jewish, Muslim, Buddhist and shamanistic elements that aptly reflect the largest continuous land empire in world history. The manuscript’s pictorial and textual cycles of Biblical figures, the Prophet Muhammad and the mythical past of Greece, Arabia and Iran break new ground, while its propagandist intent finds expression in courtly and battle scenes galore.

Delivered by Robert Hillenbrand FBA FRSE, Emeritus Professor History of Art at the University of Edinburgh. His scholarly interests focus on Islamic architecture, painting and iconography with particular reference to Iran and to Umayyad, Syria. 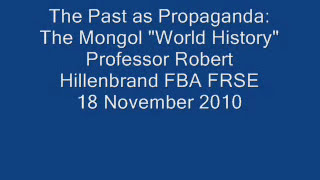