Antibiotic resistance is a global problem that needs urgent solutions. Professor Thomas Simpson FRS FRSE, the 2016 Sir James Black Medallist, says that using innovative techniques to look again at natural products has the potential to create effective new drugs and save lives. In this lecture, he examines how engineering metabolic pathways in microorganisms can provide new antibiotics and other bioactive natural products.

Antibiotic resistance is a global problem that needs urgent solutions. Tom Simpson, the 2016 Sir James Black Medallist, says that using innovative techniques to look again at natural products has the potential to create effective new drugs and save lives.

Professor Simpson began by paying tribute to his mentor, Professor Jake MacMillan, who had much in common with Sir James Black, in that both were born in Lanarkshire in 1924, both were associated with the University of Glasgow, and both worked in industry, specifically ICI. While Sir James was a pharmacologist best known for his drug discoveries, including Propranolol and Cimetidine, Professor MacMillan was an organic chemist – and early ‘synthetic biologist’ – early in his career he discovered the important antifungal agent, Griseofulvin, but his lifelong interest was the Gibberellin plant hormones. ‘He was doing synthetic biology 40 years ago before it became a trendy area beloved by funding bodies, and was involved always in interdisciplinary research,’ Professor Simpson said.

Like Professor MacMillan, Professor Simpson sees himself as an organic chemist first and foremost: he is fascinated by molecular complexity, how it can by elucidated, and how something can be synthesised, or produced, biosynthetically by nature.

Professor Simpson briefly sketched out the context of his work: we are living in an era of antibiotic crisis, where there is a steady decline of new antibiotics coming to market, coinciding with the sharp rise in resistance to existing antibiotics. Big Pharma has disinvested in this area, he said, which is not necessarily a criticism of the industry: the public demands expensive cancer drugs, which may prolong life for a few weeks, but wants its antibiotics – which actually save lives – to be ‘cheap as chips’. There is a sense that the ‘low hanging fruit’ in this area has already been picked, and rapid onset of resistance means that any new drug would have a limited lifespan, making it a high-risk, low-profit area for companies that do, of course, have to make profits.

Even the Health Secretary, Jeremy Hunt, accepts that antibiotic resistance is a global problem, and the World Health Organisation has warned that it is an issue that cannot be left to market forces alone.

Professor Simpson then outlined the rationale for his approach of looking again at natural products and finding out if molecular genetic manipulations of existing pathways can offer new opportunities for creating novel antibiotics designed to be active and easily produced.

Around a third of drugs in clinical use are based on natural products or their derivatives, rising to two thirds for anti-cancer and anti-infective agents. Natural products appear to contravene Lipinski’s rules (for effective drugs) in that they generally have high molecular weights, have many heteroatoms and are usually highly polar molecules. But Lipinski’s rules do not apply to natural products, as they are privileged structures: being made by enzymes, they can interact easily with proteins – enzymes and receptors.

Natural products are produced from living organisms through secondary metabolism, using the same building blocks as the essential cellular biochemistry (primary metabolism) but producing a wide range of secondary metabolites. They have long been used for lots of purposes for example, as colourings, flavours, poisons, perfumes, drugs and antibiotics.

Geraniol, or rose oil, is an example of a natural product, as is lycopene, which gives tomato its rich, red colour. Digitalis purpurea – foxglove – gives us the heart drug digitalin. Morphine and penicillin are natural products too, he said, adding that Macfarlan Smith in Edinburgh is the world’s major (legal) producer of opiate drugs. The importance of natural products as sources of drugs was underlined by the award of the 2015 Nobel Prize in Medicine to Satoshi Omura and Youyou Tu for their work on antiparasitic compounds.

Studying natural products is an inherently interdisciplinary area, said Professor Simpson, and it involves several steps. First you have to isolate them, then determine their structures, speculate on biogenetic origins, then undertake biosynthetic studies, including incorporating simple precursors and advanced intermediates, and finally working out the genetics. Then you can move to synthesis and pathway manipulation. Professor Simpson compared the process to looking at a high-spec sports car: you want to find out what components it has, in what order they are assembled, what you need to make it happen (e.g., manpower, supply chain, machinery), where it should be made, and so on, and then see what you can do to improve the parts or the process, with the aim of creating an overall better performance.

Professor Simpson works on a group of natural products produced by the so-called polyketide pathway, which has a close similarity to the essential biochemical pathway of fatty acid biosynthesis. These involve a range of structures from the simple to the complex. He outlined two particular projects: manipulation of a fungal polyketide-non-ribosomal peptide synthetase to create enhanced molecular diversity; and engineering the pathway to an important, known bacterial antibiotic to improve its efficacy.

First, he discussed the biosynthesis of fungal polyketides, pointing out that it is an iterative process: the same large multidomain protein – a polyketide synthase – is used in each cycle, but there is variation in what is done after the initial acetate condensation, for example modifying domains can introduce methylation, reduction, dehydration. Although they still have limited structural information on these polyketide synthases, there is a strong similarity to the mammalian fatty acid structure. Professor Simpson discussed the biological activity and biosynthesis involved in production of Tenellin, a metabolite of Beauveria species, which kills insects. He described how he and colleagues sequenced and confirmed the gene-cluster responsible for the synthesis of Tenellin, working out what controls the polyketide chain assembly cartysed by the PKS-NRPS, and how it can be manipulated to create greater diversity. Swapping the individual protein domains, which he likened to “playing with Lego blocks” showed that the PKS-NRPS gene could be cloned or even synthesised de novo, and expression in a suitable fungal host, often produced higher titres than native organisms. This work has shown that you can make a huge variety of structures by varying basic components, generating great structural diversity and new compounds; although more work needs to be done on the basic understanding of how it works.

He then spoke about work to use biosynthesis to improve the effectiveness of a known antibiotic. Mupirocin (from Pseudomonas fluorescens) is the active component of an antibacterial skin cream, and is used widely as a pre-operative nasal spray to combat MRSA. While we understand how it works – essentially it inhibits the enzyme isoleucyl t-RNA synthase in S. aureas and E. coli – it has limitations. The molecule is chemically unstable, meaning that it can only be used topically; if it moves out of a narrow pH range it is very soon rendered inactive.

The antibiotic mupirocin is actually a mixture of three compounds, Pseudomonic acid A (PA-A), PA-B and PA-C. PA-C is more stable; PA-B is inactive; and PA-A is active, but unstable. The hypothesis is that if you could manipulate the biosynthetic pathway to make the compound more stable, it would have wider applications. He discussed work to identify and knock out genes responsible for epoxidation – the origin of the instability of PA-A, with the aim of making PA-C the major metabolite, and therefore creating a more stable compound.

Having isolated and sequenced the biosynthetic gene cluster, they found there were six multifunctional genes, and many individual genes. They showed that manipulation of some of these genes results in a switch from PA-A to PA-B production. To their surprise, they found that PA-C is not a precursor to A or B, and that PA-B is an intermediate to A.

The conversion of PA-B to PA-A seemed to be a simple process – the overall loss of a single oxygen atom – but it requires seven genes, five intermediates (two enzyme bound), and only the last, PA-A, has significant activity. He then described work to make PA-C efficiently using the thiomarinol system – thiomarinal has a similar structure but lacks the epoxide – with the aim of increasing yields. Mutation of the epoxidase leads to very low titres of PA-C. Engineering a mupirocin/thiomarinol hybrid gene culture to make PA-C leads to much higher yields.

Professor Simpson concluded by saying that we can manipulate biosynthetic pathways to create exceptional structural/molecular diversity, and to select for a more desirable compound. But he warned that we cannot predict antibiotic (or any other) activity or ‘design’ an antibiotic de novo. Indeed, he advised treating any claim that someone could design new drugs de novo “with a pinch of salt”. He also cautioned that even very small, apparently trivial changes in structure, e.g., PA-B to PA-A, can have drastic effects on gaining or losing bioactivity.

He finished by comparing research both to climbing a high mountain and crossing a great bridge: often the journey can be more interesting than the eventual destination. For Professor Simpson, the research journey clearly remains fascinating and the audience clearly appreciated being allowed a glimpse into his exciting work.

Professor Simpson debated questions ranging from how to protect discoveries to whether pharmaceutical companies are suppressing the efficacy of using essential oils to treat MRSA – he is sceptical about the latter, but conceded that pharmaceutical companies do act like big football teams, in that they will ‘buy up’ promising players, or compounds so that other teams, or companies, can’t benefit from them, but then leave them ‘sitting on the bench’.

Asked what techniques he uses in the work described, he responded that it is largely sophisticated NMR (nuclear magnetic resonance) spectrometry. He loves structure elucidation, he said, adding that he finds it satisfying in the same way as solving a crossword puzzle.

Asked how he could protect the intellectual property of the discoveries, he said that the compounds are known, but that it is possible to patent the process – which is why he is intentionally not giving the detail of what that involves. This is not for the money, he said: he is doing it because he loves the science and because – if it leads to a more effective antibiotic – it will be improving the ‘lot’ of the public in general. 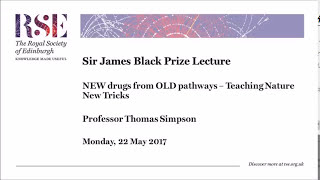