To mark the Polish presidency of the EU, the RSE was treated to a lecture on the extraordinary roller-coaster history of Kraków – once “the spiritual capital of a country that did not exist” and now a cosmopolitan city at the centre of a united Europe.

Kraków in the European Core

To mark the Polish presidency of the EU, the RSE was treated to a lecture on the extraordinary roller-coaster history of Kraków – once “the spiritual capital of a country that did not exist” and now a cosmopolitan city at the centre of a united Europe.

Professor Purchla began by saying how much he felt at home in Edinburgh and how an understanding of the past is essential to understand the present and future of both these great cities. Kraków is right in the centre of the land mass of Europe and has no political function “at the moment,” unlike Warsaw, but in the past the city was the “gateway for Christian civilisation”, the seat of dukes and kings as well as bishops – with a cathedral where state funerals and coronations were held. “Kraków has a special place in Polish mythology,” said Purchla. In the 13th Century, its regular layout was the model of a medieval city, and its golden age came at the turn of the 15th and 16th centuries, when it was “one of the most dynamic economic centres in Europe,” a member of the Hanseatic League and a cosmopolitan city with one of the oldest universities in Europe – the alma mater of Copernicus. At the time of the Jagellonian dynasty (14th–16th centuries), Kraków acted as a bridge between the Roman and Byzantine worlds, as well as between the Black Sea and the Baltic, and during the Renaissance, it attracted leading architects and artists. It was a crucible of political and cultural influence, competing with Prague and Vienna, and also home to many Scottish merchants – the second biggest group of foreigners in Kraków.

“Political borders change more quickly than cultural borders,” said Purchla, as he described how economic and political power gradually shifted to Warsaw in the 17th Century, along with the kings (who still returned, however, to be buried). Purchla also joked that this decline (over the next 200 years) was a good thing in some ways: “The best conservator is often loss of power.” At this time, Kraków held on to its cultural status, attracting intellectuals from all over Europe, including Goethe and Balzac.

The 18th–19th Centuries were turbulent times for the city, which became an object of desire for Russia, Prussia and the Hapsburgs, and was made part of the Duchy of Warsaw by Napoleon in 1809. The freedom fighter Tadeusz Kościuszko led an unsuccessful insurrection in the town’s main square in 1794, but at the Congress of Vienna in 1815, Kraków was declared a free city (state!), despite being bankrupt, and became the “Mecca” of Poland or “the spiritual capital of a country that did not exist.” According to Purchla, the city also emerged as the smuggling centre of Europe, lying in the “vacuum” between the three dominant powers during an era of protectionism, and this led to a new age of prosperity. In the 1840s, it was annexed by Austria and became a military fortress, as part of a deal between the Hapsburgs and the Polish aristocracy. After the end of the Austro-Prussian war in 1866, Kraków blossomed as a multi-ethnic, multi-cultural and academic centre, building the first national museum and a new theatre. The city was still relatively small in terms of population, but it still had great spiritual and cultural significance for Polish people.

In August 1914, the first Polish army since the mid-19th Century gathered in Kraków’s “Meadow of Freedom,” led by Józef Piłsudski, the future Chief of State and “father of independence.” Purchla also joked that “to be successful in Polish politics, you must be a martyr,” and confirmed this by describing how Piłsudski had been exiled to Siberia by the Russians in his early career.

In the years leading up to the Second World War, Warsaw was established as the modern capital of an independent Poland, while the ancient capital of Kraków developed as an academic, cultural and spiritual centre – and also the city where Piłsudski was buried as a national hero.

In 1939, a “different chapter” began, as the city of 250,000 people was captured by the Wehrmacht a few days after the start of the war. Hitler decided to make Kraków the regional capital (“a bombastic huge centre like Nuremberg”) and drew up plans to redesign the city, complete with new statues. After 150 years as the spiritual capital of Poland, said Purchla, the Nazis decided to “change reality and history,” and the Jewish population was removed to a ghetto, before being sent to the death camps, including nearby Auschwitz. This was the period depicted in the film Schindler’s List, and one of the few survivors was the film director Roman Polanski. “Despite the human losses and the plundering,” said Purchla, Kraków was the only major Polish city to survive relatively intact from the War, “symbolising continuity” for Polish people.

As the Stalinist era began, Kraków was perceived by the Soviets as a “reactionary” centre which they quickly set about changing by creating an entirely new “Utopian” city for 100,000 workers, complete with huge steelworks – a symbol of Sovietisation. Purchla said this was the cause of the city’s “biggest disaster,” with acid rain eroding the stonework and “destroying the heritage” so much that UNESCO described the city in 1978 as “neglected and polluted” and in urgent need of protection. Not all was bad, however. During this period, Kraków was also a centre of creativity, where intellectuals and artists would gather, including Edinburgh’s Richard Demarco.

The next phase in the city’s history revolved around Karol Wojtyła, who later became Pope John Paul II. Kraków became a battlefield between the church and the Soviet Union, said Purchla, and the Archbishop of Kraków led a campaign to build a new church in the city – not just a symbol of religion but also of national identity. During the 1960s and 1970s, the Roman Catholic Church became stronger and an umbrella for all sorts of people. The new church of Nowa Huta, Bieńczyce Basilica, was opened in 1977, and two years later John Paul II returned as Pope and held a mass on the Meadow of Freedom attended by 1.5 million people. In the early 1980s, Solidarity, led by Lech Walesa, also had a huge impact on Poland, and after the Pope was attacked in 1981, “the human potential was awakened” in Kraków as large crowds of people displayed their support and expressed their opposition to Soviet rule – followed by a crackdown by the Polish leader General Jaruzelski, who “declared war” on his own people. The paradox, according to Purchla, was that it was the workers who led the opposition, not students or academics. And ironically, the statue of Lenin in Kraków had to be guarded by soldiers.

In 1989, the “bloodless revolution” propelled Kraków into the modern age and, once again, Kraków was recognised as the spiritual capital of Poland, open to the world and cosmopolitan in attitude. Tourism surged, attracting up to seven million visitors a year, but the downside, said Purchla, was the “coca-cola-isation” of Kraków – and also corruption. Purchla also illustrated the internationalisation of Kraków by describing how a taxi driver, taking him to the airport in Dublin, revealed that he had bought an apartment in Kraków – surely a sign of the times.

Purchla concluded by describing the legacy of John Paul II – the “father of independence” in the modern age. When the dying Pope visited Kraków again in 2002, a crowd of 2.5 million people gathered in the Meadow of Freedom – reflecting the strength of feeling among Polish people. “It is impossible to understand modern Polish history,” said Purchla, without understanding the Pope’s contribution. And when he died soon afterwards, “Kraków was crying.”

Finally, Purchla returned to the map of Europe, showing Kraków at the centre of a now united Europe, “more connected than ever” to Edinburgh and other cities.

Kraków has gone through many changes. What best practices can you share?

In 1991, Edinburgh and Kraków formed a partnership in urban planning. We learned a lot from that experience.

Has the Jewish contribution to the city been trivialised?

This is a key problem. The Jews made a huge contribution to the multi-ethnic character of the city and once accounted for a quarter of the population. Kraków today is a “shrine” for the Jews and in the past it was a “bridge” between the more traditional Hasidic Jews and “Western” Jews. The Jewish people came under the protection of the Polish king and did not just live in the “Jewish Quarter” of Kraków – a district much neglected after the war. In recent years, the question was: “How can we revitalise the Jewish Quarter without any Jews?” There was a danger of commercialisation, but the non-Jewish population organised a Jewish festival, and nowadays there are thriving kosher restaurants in the city. Kraków was the scene of a “disaster” for the Jews – 99 per cent of Kraków’s Jewish population perished in the death camps.

Edinburgh and Kraków have many things in common – apart from the trams. Any comments?

Kraków has a pedestrianised medieval centre – a major achievement of the 1970s and 1980s. The tourists love it. Since 1989, however, local car owners have not been happy – and this is a big political problem.

Kraków is one of the most positive results of integration in Europe. The city is no longer isolated or “suffocated” in the centre of the land mass, but playing a global game – with a modern university, which carries out 15 per cent of all research done in Poland, plus its heritage and its closeness to Auschwitz. 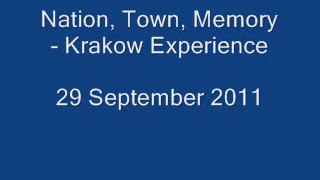