The Middle Ages – A distant mirror

Medieval life and death and Medievalism through the centuries

Far from being the Dark or Middle Ages, the Medieval Period (c.500-1400 AD) was a vibrant and culturally exciting time that changed dramatically from its Germanic origins in Anglo-Saxon times to the later romance culture in the Norman period. It was an age in which the majority of people were illiterate and so learned aurally and visually. For that reason, it is important to consider the paintings, frescoes, sculpture, drama and music in addition to the written legacy of the period.

In this distinctive ‘in conversation’ event, Dr Chris Jones and Professor Graham Caie discuss some major issues of the period, as well as the attraction of medievalism in later periods, concluding with attitudes to mortality and death. 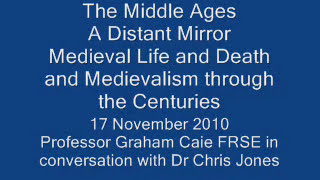