Making a difference – How to reduce cancer occurrence and recurrence

There is a growing amount of evidence that weight, diet and exercise are important in cancer prevention and for cancer survivors. Whilst more work is needed, the clear message is that having a healthy lifestyle makes a real difference to risk.

Leading cancer researcher, Professor Wendy Demark-Wahnefried discusses the fascinating work being done on how lifestyle modification can reduce the risk of developing the disease and prevent recurrence in treated patients.

Making a Difference: how to reduce cancer occurrence and recurrence

There is a growing amount of evidence that weight, diet and exercise are important in cancer prevention and for cancer survivors, said Professor Demark-Wahnefried. Whilst more work is needed, the clear message is that having a healthy lifestyle makes a real difference to risk.

Professor Demark-Wahnefried began by setting the scene around cancer and weight. Each year, over 14 million people are diagnosed with cancer and eight million die from it. The number of cancer survivors is growing and is likely to continue to grow – there are around 33 million cancer survivors worldwide and around 830,000 in the UK alone.

Diet and physical activity make a difference, both in preventing cancer and in preventing recurrence, and there are a number of guidelines and recommendations out there. She focused on the more stringent guidelines of the World Cancer Research Fund (WCRF), and on the less strict guidelines from the American Cancer Society (ACS). For example, the WCRF guidelines on weight are to “be as lean as possible without becoming underweight,” whilst the ACS says “achieve and maintain a healthy weight.” Obesity is now considered to be an epidemic and rates are burgeoning, she said. Figures from 2008 showed that worldwide, 35% of adults are overweight and 11% obese. This has doubled since 1980, and prevalence is higher in some cancer survivor groups, for example, breast and prostate.

There is evidence that energy restriction promotes lifespan in animal models, and a very old study, conducted in 1956 before the advent of today’s ethics committees, showed that if you cut the calories of people living in an old age care home, then those who were calorie restricted lived longer.

There are several cancers where risk is higher in people who are overweight or obese. These include cancers of the breast (post-menopausal), kidney, endometrium, colon, oesophagus, pancreas, gallbladder and thyroid Data are emerging all the time that add other cancers to that list, such as cancer of the ovary. There is also evidence that people who pursue purposeful weight loss can reduce their risks of developing some kinds of cancer.

Professor Demark-Wahnefried cited studies which show that people who put on weight after cancer are at higher risk of death – and not just from cancer. One meta-analysis (Chan et al. 2014) looking at more than 213,000 women with breast cancer found that an increase in BMI pre- to post-diagnosis led to a much higher risk of dying from breast cancer (29%) and an 8% higher risk of dying from all causes. A meta-analysis of 18,203 men with prostate cancer found that the risk of biochemical recurrence and death from prostate cancer rose by 21% and 20%, respectively. We don’t know exactly how obesity influences cancer, but there are several factors which could well be at play. These include inflammation, growth factors, sex steroids, insulin, diabetes and other comorbidities, and drugs such as statins (which may be protective).

We do know, however, that interventions to help people lose weight lead to improvements in things such as insulin and inflammatory markers. Several trials have shown health benefits and successful weight loss, starting with a study conducted in the 1980s (published in 1993). The study author, de Waard, was ahead of his time, said Professor Demark-Wahnefried – oncologists thought his thesis was ‘weird’ at the time and he had to stop the study prematurely since oncologists’ referral to the trial was so low. We need big-number studies in this area, she said, ideally more than 2,500 people would be needed in order to either prove or disprove whether weight loss can affect survival or recurrence outcomes.

Professor Demark-Wahnefried outlined some behavioural strategies for losing weight, saying that most of them were common sense. These include setting a goal, weighing every day, self-monitoring by recording calories, exercise and weight, and controlling stimuli – for example, not having high-calorie, tempting foods in the house, and making rules, such as always asking for salad dressing on the side, and taking the stairs. “You’re not going to lose weight in a vacuum – it’s not easy for anybody,” she said. Interest in obesity and cancer is increasing. For example, an IOM workshop on cancer survival and recurrence in October 2011 “kicked off much new policy”, including a position statement that said that oncologists should counsel or refer patients who have weight management issues.

Moving on to physical activity, she cited the WCRF recommendation to do at least 30 minutes of physical activity every day (compared with the ACS recommendation to avoid inactivity and do at least 150 miles per week and strength training twice a week). Data are accumulating to suggest that exercise has a protective effect for cancer recurrence and survival. She pointed out that it takes a lot of exercise to burn just a few calories – six minutes of chopping wood just to deal with “six lousy jelly beans”.

Specific dietary recommendations from the WCRF include avoiding sugary drinks, limiting energy-dense foods, eating more of a variety of vegetables, fruits, whole grains and legumes, and limiting consumption of processed and red meat. Indeed, she cited studies showing that a prudent diet, as opposed to a ‘Western’ diet, had a significant protective effect for overall mortality; whilst one shows significant protection for cancer specific mortality. In contrast, a ‘Western’ diet places cancer survivors at risk for overall mortality, as well as cancer-related mortality, in studies that have targeted colorectal cancer survivors.

Sometimes, studies don’t show much of a difference, however. The Professor quoted the Women’s Health Eating & Living study (WHEL), based on 3,088 early-stage breast cancer survivors, who were asked to eat a diet high in vegetables. There was very little difference between overall mortality rates and breast cancer deaths and events between the intervention group and the control, she said.

Another study (the Women’s Intervention Nutrition Study – WINS) showed reduced rate of recurrence in women following a low-fat diet. This was particularly notable in women with the ER negative form of the disease – a potentially exciting finding, because treatment options are more limited in this group.

Why the difference between those two studies? It could be because the sampling was different, with WINS looking at people within a year of diagnosis compared to five years for WHEL. Other factors could be that WINS screened people for their previous dietary intake, whilst WHEL didn’t – and WHEL participants actually already ate a high proportion of fruit and veg (many of them came from California). In the WINS group, participants lost six pounds over the study period, whilst the WHEL women’s weight remained stable.

Moving on to alcohol, it is directly associated with at least some forms of cancer, including kidney, head and neck, and breast. For head and neck cancer, the advice is clear-cut – drinking alcohol will increase risk of complication and reduce survival. With other cancers, there is a difficulty because of the potential cardiovascular protection from one to two drinks per day. People should look at their family history and make their own decisions based on whether they are more likely to die of cancer or heart disease, when deciding whether to drink or not.

The advice is much clearer on the use of supplements, the Professor said. Whilst many people take supplements to try to prevent cancer, and many cancer patients also take supplements, she said the advice is not to take any (unless you have a specific deficiency). A number of trials which set out to show the protective impact of supplements (including vitamin E and selenium, and betacarotene, and even multi-vitamins) showed either no benefit or higher risk of specific cancers. It’s not certain why supplement trials have failed – it might be that picking out one nutrient in isolation isn’t the way to go – but the bottom line is that food should be the source of nutrients, rather than hoping for a miracle in a bottle. If you are considering supplements, ask a dietician to analyse diet for deficiency, check blood levels of nutrients, consider the lowest dosage and most complex preparation and, if you are currently taking supplements, wean yourself off them slowly rather than going ‘cold turkey’.

What about synergy between different lifestyle practices? There are data showing that those breast cancer patients who are active and eat better quality diets have a significantly reduced risk of death from all causes, and from breast cancer. “It’s good to practise multiple healthy behaviours,” she said.

Professor Demark-Wahnefried wound up her talk by praising innovative work on cancer and nutrition taking place in Scotland, and shared resources for several groups, including the Scottish Cancer Prevention Network.

The question and answer session was chaired by Robert Steele, Chair of the Scottish Cancer Foundation. He exercised Chair’s privilege to ask the first question, about the value of bariatric surgery in managing obesity.

Professor Demark-Wahnefried said that there are several studies looking at cancer risk after bariatric surgery, and that they show that risk is reduced. As a nutritionist, however, she said it is important to start with diet, exercise and behavioral therapy, then move on to pharmacological therapies or bariatric surgery only if diet, exercise and behavioral interventions fail.

Asked about whether the 5:2 diet – where people eat normally for five days per week and have a vastly reduced calorie intake on two days – is safe and effective for preventing cancer, Professor Demark-Wahnefried said that there are always different diets and fads around. She said that weight loss ‘trumps everything’. “Any weight loss is good, and if it works, then it’s not a bad thing to do,” she said. She cautioned that the 5:2 diet wouldn’t be suitable for some people, including people with diabetes who use insulin. She believes it makes more sense to cut back on caloric intake more generally.

One member of the audience asked about an initiative to encourage gardening for people after breast cancer. Professor Demark-Wahnefried said that she and other investigators at the University of Alabama at Birmingham have a project to improve vegetable consumption in cancer survivors by helping them to grow a garden. This is easier in Alabama than it would be in Scotland because there are three growing seasons (and we barely have one). It improves vegetable intake and also physical function.

Asked about alcohol, and specifically the cardiovascular effect, she said there is a dichotomy between CVD risk and cancer risk. People who have had breast cancer and continue to drink tend to have more breast cancer events, but don’t tend to die of them, she said. Women have to work out themselves what they want to do, as cancer events can cause emotional turmoil even if you live longer. You also get cardiovascular benefit from exercise, she added. “Let’s exercise more rather than having a pint.”

Professor Demark-Wahnefried was asked about whether it is worth taking vitamin E or multivitamin supplements. She said people shouldn’t take supplements unless they are actually deficient in a particular nutrient.

Asked about the progress of the position statement to encourage cancer doctors to promote the value of healthy lifestyles, she said it is “baby steps” but that a toolkit has been developed to help clinicians work it into a busy practice. 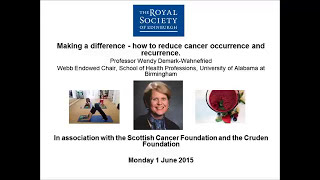