Liberal democracy and the challenge of authoritarian capitalism

A talk given by Professor Michael Ignatieff, the Edward R. Murrow Professor of Politics, the Press and Public Policy at the Kennedy School of Government, Harvard University and former Leader of the Liberal Party of Canada, at the Royal Society of Edinburgh. This was a joint event with the Royal Institute of Philosophy. 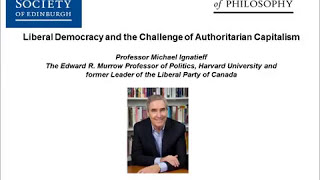