Lanark: in Conversation with Graham Eatough

Lanark: a Life in Three Acts made its world premiere at the 2015 Edinburgh International Festival.

This special event, organised in partnership with Edinburgh International Festival, saw the Director of the play discuss his work with Professor Jan McDonald FRSE, former Professor of Drama, and Professor Alan Riach, Professor of Scottish Literature, both from the University of Glasgow.

The new production celebrates both Gray’s 80th year and the 70th anniversary of the Citizens Theatre and continues a collaboration between Graham Eatough and David Greig which began with experimental theatre company Suspect Culture.

It’s a heady brew of satire and surrealism – Glasgow’s Ulysses mixed with elements of Dante, Voltaire, Proust and Camus – but Alasdair Gray’s novel Lanark is about to reach the stage, thanks to a collaboration between director Graham Eatough and playwright David Greig, with a little help from the octogenarian author himself. But how do you adapt such a gargantuan, complex and challenging work and turn A Life in Four Books into A Life in Three Acts?

Professor Riach set the scene by saying that he couldn’t think of any more challenging text to adapt for the stage. Focusing on Lanark’s complex narrative structure, its “moment in history” and its theatricality, he also described Lanark as a “fantastically important novel” which changed Scottish fiction and had a major influence on the next generation of writers in
Scotland, including Iain Banks and Janice Galloway.

The four books of Lanark are deliberately and playfully “in the wrong order,” mixing naturalistic and fantastical content. Comparing it to Walter Scott’s Waverley and explaining its indebtedness to Archie Hinds’ A Dear Green Place, Riach also quoted Henry James’s comment about how many novels seem bewildering at first. Readers can easily lose their bearings with Lanark, he added, and become, like the characters, “mystified and dislocated” in its imaginary landscape, which sometimes appears like “a media strip” yet is also defined and connected. Glasgow also takes on a life of its own, a city whose magnificence goes largely unnoticed because “nobody imagines living there”. Riach also talked about the “invented perspective” of Lanark, and discussed how Gray was better known as a visual artist before the novel was published in 1981.

The year it was published is also important, said Riach. Gray had been working on the novel for decades and was spurred on to complete it in the wake of the Referendum in 1979, when
the Scottish electorate rejected devolution. The new play will follow last year’s Referendum, so this provides an interesting political context, but Riach also said the book was “not explicitly political”, despite Gray’s open support of Scottish independence – it is more concerned with “how to make the world a better place” than specific political issues.

Graham Eatough then described the genesis of the drama. Still “a work in progress,” it had come about following discussions on how to commemorate Gray’s 80th birthday last year,
when there was a series of events including exhibitions of Gray’s visual work. To dramatise Lanark was a “big ask” and also a long-held dream of Greig and Eatough, who had already
undertaken very similar projects and had a “complex relationship” with challenging books, including Crime and Punishment and Candide, both of which they have adapted for the stage.

With support from Glasgow’s Citizens’ Theatre and the Edinburgh International Festival, the “epic” project got underway, not only to pay homage to the novel but also to “breathe new life into it.” Eatough also joked that he and Greig had in the past been “arrogant and pretentious” when it came to their ambitions to “stage the impossible.” But Lanark fits the bill as a picaresque journey with a huge geography, complex structure and complex timescale, and Eatough and Greig both have a “passionate connection with the book.” Maybe it was “foolhardy” to take on the challenge, and maybe it could be a “poisoned chalice,” said Eatough, but it was too good a chance to ignore.

The complex structure is one of the biggest challenges of adapting the work, with Act 1 presented as Act 2, reflecting the novel – where Book 1 is really Book 2. Would two different voices be able to find a space where they could both co-exist and inform each other, Eatough asked. The novel has a playful sense of humour and the production is trying to be faithful to this, as well as being faithful to the complexity of the narrative structure. “The story is not a straight line,” Eatough added, reading from Greig’s second draft. “What’s on the other side of the sky?” one of the characters asks. “There is no other side,” comes the reply.

Questioned about the structure, Eatough said the play’s three acts (rather than the novel’s four books) had “a certain value for the theatre.” The two books on Unthank and The Institute have been merged into one, followed by the more “realistic” Act 1 (which is really Act 2), and the third act on Unthank and Provan, and Eatough said Gray (also a dramatist) is happy with this approach. Will Gray make a cameo appearance in the drama – like the autobiographical author Nastler (“Nasty Alisdair”) who appears in the novel? Eatough also talked about the conflict between trying to be faithful to the original work and the idea that “every translation is a betrayal,” suggesting that he wishes the betrayal to be as faithful as possible. There will be leaps of the imagination, but this will be balanced by trying to do justice to the story and make sure it is still recognisable.

Professor MacDonald asked Eatough how he would deal with “the scary bits” – the supernatural and the surreal. The director hinted that the production “would be drawn to Gray’s illustrations as a visual resource” for the play, and connect with Gray the visual artist. Riach then concluded by describing the “comprehensive and overwhelming” world of the novel, and the conflict between the oppressive and mechanical world and human aspiration. All literature comes down to stories and songs, according to Riach, and Lanark, like all great art, is about what it means to be human – and perhaps also Glaswegian?

Q: What about the political context – i.e., following another Referendum?

A: Riach said the book was not explicitly political, and Eatough said the theatre engages with the audience on a human scale. This does not deny the political, Eatough continued, but Lanark is also very human and personal. Riach said that politics would always come into it, adding that people now know about Glasgow much more than before. The play tries to place the work in its right time, said Eatough, as Candide was also of its time. Both speakers then compared the parallel endings of Candide and Lanark – Voltaire’s entreaty, “cultivate your garden,” and the resigned acceptance of Lanark, sitting in the midst of desolation yet “glad to see the light in the sky.”

Q: There are only ten weeks before opening night, so how will you get there?

A: Eatough said the company was working in a “slightly terrifying way,” as usual, punctuated by “intensive collaborative moments.” The second draft is now progressing and rehearsals
will begin in late June/early July.

Q: Who’s involved with the production?

A: We are still finalising the cast, said Eatough, but Nick Powell will be working on the music with Mick McCarthy (from Franz Ferdinand) plus Laura Hopkins (design), Nigel Edmunds (lighting) and Gerry Mulgrew (casting). There will be ten actors – names to be confirmed, but including new faces. Eatough also wondered if the characters should age, as they do in the
novel. The novel is also autobiographical, so how do they cope with the presence of Alasdair Gray?

Q: How do you compare Gray with his fellow octogenarian Glaswegian, John Byrne – also a writer and visual artist?

A: There are parallels, said Riach. How do we create an archive for Gray to incorporate text and visual art? It’s similar for Byrne, a man with “a healthily hybrid and challenging nature, of a similar vintage to Gray,” also concerned with working men and social justice. Byrne’s work (The Slab Boys, Tutti Frutti) is also very fresh after all these years, like Gray’s – concerned with what it is to be human. In Gray’s work, there are “big black lines” between reality and fantasy, but those lines are also porous.

Q: Accessibility is something people talk about in relation to Gray. Do you think he is accessible to working-class people and ordinary Glaswegians?

A: Etough suggested this would certainly be true if you bought Gray a whisky. He also said his art was highly accessible – e.g. his murals in Hillhead underground station. Riach then repeated a story about a taxi driver asking him if he knew about Lanark, after Riach told him that his job was teaching students there is more to Scottish literature than Burns. “You should give it a go,” Riach suggested. “It doesn’t sound too bad,” the driver replied. “The last book I read was Ulysses.”

Q: William Boyd has said that he prefers the realistic sections of Lanark, but I preferred the fantastical, and think they would appeal to younger readers. Like William Blake, Gray is more than “just a visual artist,” so how will you reflect this in the play?

A: What is best – the realistic or the fantastic? Riach said that Lanark is very complete, and it’s best to read it all, like Grassic Gibbon’s trilogy, A Scots Quair. 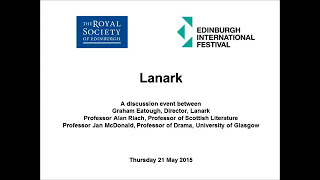