Home » Resources » Video » From the infinite to the infinitesimal: birth of a Higgs Boson

Professor Anthony Doyle FRSE, Professor of Physics explores how the arrival of a new era in fundamental science, which is transforming our understanding of infinitesimal scalar fields, is also changing our view of the infinite Universe.

Professor Doyle’s lecture explored how the arrival of a new era in fundamental science, which is transforming our understanding of infinitesimal scalar fields, is also changing our view of the infinite Universe.

He began by describing the origins of the Universe (which emerged from the multiverse of infinitesimal probabilities) and the formation of the Higgs field. This developed around a microsecond after the Big Bang, when the new Universe was already starting to cool. It is theorised that the Higgs field is accompanied by the Higgs boson (or Higgs particle), through which it constantly interacts with other particles. It is this interaction that gives particles their mass. And the more Higgs bosons interact with another particle, the greater its mass.

The Professor said that in unification theory, physicists look to the Big Bang for evidence of a single superforce and that each of the four fundamental forces is thought of as a manifestation of that single force. After 380,000 years, the Universe cooled sufficiently to form atoms, emitting light. And now, 13.8 billion years on we are bathed in this cooled light. Using the Large Hadron Collider (LHC) we are recreating the conditions of the very early Universe, just one ten billionth of a second after the Big Bang.

Professor Doyle then described some of the puzzles that exist in our understanding of the Universe. The first is Dark Matter, which was recognised after it was found that galaxies and galactic clusters are rotating faster than scientists would expect. The second is Dark Energy, revealed by the discovery that an unexplained mechanism meant that the Universe is not expanding at a uniform rate, but accelerating at the outer edges. This adds up to the third puzzle, of which Professor Doyle said: “Fundamentally we don’t know what 95% of the Universe is made of. We know an awful lot about matter … but we know essentially nothing about Dark Matter or Dark Energy.”

Three equations (including E = mc2) give us clues on how to start unraveling these puzzles. Many of the questions being asked about this missing 95% involve the modeling of hypothetical particles. He went on to describe how the LHC allows models to be tested through the creation of new particles. By creating the smallest possible particles it is, therefore, able to help science move towards an understanding of the composition of the Universe at the very largest scale.

Professor Doyle said there is an increasing link between researchers working in astrophysics and cosmology (for example using the Hubble Telescope to probe galactic and intergalactic space) and particle physicists investigating matter at the smallest scale – the world of quarks. The LHC, which is like a “super-microscope”, is at the forefront of exploring the Universe at the smallest scale, less than a thousandth of that of the atomic nucleus. This has been a groundbreaking advance, he explained, because we are now “exploring a new energy frontier”.

The key questions being asked by the teams working at the LHC address the origins of mass (that relates to Peter Higgs’ mechanism) and the unification of forces, trying to relate them back to the origins of the Universe. They are also investigating Dark Matter and Dark Energy and whether they, like the Higgs, are scalar fields. The Professor went on to discuss the three important factors in understanding our Universe – Planck’s constant, the speed of light and a mass scale. After this, he further explained the role of the LHC in exploring the physics of the early Universe at a point when it was radiation dominated and opaque.

It has become clear, through studies of the Universe at different points in its evolution, that the proportions of Dark Matter and Dark Energy have changed. The idea is that there have been three eras; the first of radiation, the second of matter and, now, of Dark Energy. The progress being made in science means we are now able to ask if Dark Matter is a supersymmetric particle and if Dark Energy is detectable. And with the LHC, we have the means to look for them.

Professor Doyle continued by looking at the Standard Model of particle physics and at elementary particle masses. He then explained the importance of the Higgs field in making it possible to “consistently understand things at the very smallest level, incorporating all of the various masses that go into the Standard Model”. The theory is that particles that do not interact with Higgs boson particles are massless and travel at the speed of light. The more Higgs bosons that “cling” to another particle, the greater its mass and the slower it travels.

The primary objective of the LHC was to find the origin of mass and whether it was indeed the Higgs particle. It was thought that the LHC could generate sufficient energy to create a Higgs boson and allow scientists to watch its decay. But the creation of the LHC – one of humanity’s greatest-ever technological achievements – and then its use to generate a Higgs boson, involved many technical challenges and decades of work.

The challenges included learning to accelerate particles to very high speeds, keep them in a controlled orbit round a circular system and collide them at the right moment and in the right place. That place is the 44 metre-long, 7,000 tonne Atlas Detector. Simply ensuring that the collisions can be spotted and analysed has meant having equipment that can take pictures of what is going on every 25 nanoseconds. The central tracker alone has six million readout channels. The amount of data generated is huge and the analysis requires vast numbers of central processing units all round the world. Progress was “relatively quick” and the LHC was ready in 2008.

The announcement that the Higgs boson had been detected came on 4 July 2012 and marked, said Professor Doyle, “a period of revolution”.

While the detection of the particle is the “peak of our reach” so far, the LHC is now being used to move into even more remarkable territory. The Higgs boson is being studied with ever-greater precision and trying to test its properties – and also test the Standard Model itself. He said: “It may be that deviations from the Standard Model will first be revealed by looking at the Higgs boson more closely.”

So far, the experiments have been consistent with the Standard Model. But the scientists will now test it with increasing rigour and precision to see if there are breaking points. As part of this, the LHC will be shut down and upgraded, coming back online in around 2019. The stage beyond that may be a linear collider, effectively a Higgs boson factory, producing large numbers of particles for study – which may also reveal “chinks in the armour” of the Standard Model.

Professor Doyle said the discovery of the Higgs boson, 50 years after its prediction, was a scientific triumph. But whether it is the Standard Model particle or, for example, a supersymmetric one, remains to be seen. Many puzzles remain – for example the nature of the Higgs field itself, as it is neither a matter or a force. Beyond that, there are many questions about scalar fields and these have the potential to further change our understanding of the Universe.

The potential for discovery is enormous and Professor Doyle concluded that he is optimistic that “there are many exciting years ahead”.

The Professor was asked to further describe the nature and importance of the Higgs boson. He replied that it might be the first fundamental scalar particle ever seen. All previous scalar particles have turned out to consist of other components. However, he added, experimentation may eventually show that even the Higgs field is composite and that there are still more basic properties beyond. 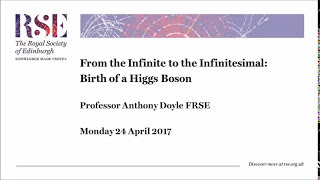 Explaining strange photometry observed by Kepler
Curiosity is the gift that keeps on giving
RSE Fellows recognised in the Queen’s Birthday Honours 2021
Manage Cookie Consent
We use cookies to optimise our website and our service.
Manage options Manage services Manage vendors Read more about these purposes
Preferences
{title} {title} {title}