For over two decades, Allan Little has been reporting the changing shape of our world. In this lecture, he tries to make sense of the current crisis in Europe, especially the euro crisis, by putting it in the context of Europe’s history.

The MacCormick European Lecture is named after the late Profesor Sir Neil MacCormick in recognition of the contribution made by him to Scottish and European politics and the international work of the RSE. 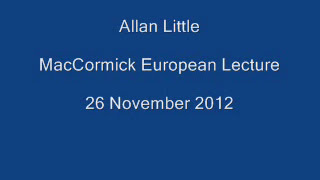