Home » Resources » Video » Growing tomorrow’s dinner – should GM be on the table?

Growing tomorrow’s dinner – should GM be on the table?

Almost a third of people feel that the risks of GM crops outweigh the benefits and most do not feel informed about them. Do we need to take another look at technologies such as GM to see if they can offer solutions to the global challenge of food security? Part of a series of similar events being held around the UK at the time, aimed at providing information from an expert panel about genetic modification and offering an opportunity to debate and raise questions.

In an era of global warming and rapid population growth, the issue of GM is of immense importance in the search for food security and secure, sustainable sources of food for the world.

Growing Tomorrow’s Dinner – Should GM be on the Table?

The evening was introduced by Professor Neva Haites. It was part of a series of similar events being held round the UK, aimed at providing information from an expert panel about genetic modification and offering an opportunity to debate and raise questions. Professor Haites said that the event also set the scene for further discussions that she hoped would take place with the Scottish Government, which has banned GM. In an era of global warming and rapid population growth, the issue of GM, she said, is of immense importance in the search for food security and secure, sustainable sources of food for the world. A video was then shown which explained the basics of GM science and its potential benefits.

Each panelist explained their interest and background in GM.

A genetic scientist for more than 40 years, the Professor was among the pioneers who helped to develop the first GM crops. He recalled how the technology was first made public in 1983, saying “that was a big day in genetics”, because scientists from then on have been able to place naturally occurring or synthetic genes into plants. These can then reproduce in a stable way.

Twenty years ago, his work in the commercial sector in the UK was closed, after which he transferred to the academic sector. Since then, he has written a number of papers on the issue and he is a Government advisor on the release of genetically modified organisms into the environment.

“The technology is now moving very, very rapidly. Although we don’t have GM crops grown in this country, they are grown widely round the world,” said Professor Dunwell. He added that there is now very little GM research left in the UK and all commercial progress in this area is now made elsewhere.

The CPA is the trade body for companies involved in areas such as pesticides and seed breeding. He also has a small arable farm in Hertfordshire, which gives him “some insight into the challenges facing farmers today”.

Mr von Westenholtz said that people are often surprised by how technological farming has become. Precision farming – which uses sophisticated targeting techniques – to get the most and best yield from the land is now becoming commonplace. “Technological innovations are key to farming and farmers are very keen to jump on those,” he added.

“When it comes to GM in particular, seed breeding and seed varieties, farmers for decades, centuries and millennia have been selecting seeds which have certain traits.” Each year, Mr von Westenholtz says he is presented with lists of seeds with different characteristics. Despite this, farmers in the UK have not been able to significantly raise their yields over the past 20 years. “That’s a really big problem, which is why we are having to have these discussions about new technologies – because globally we have 200,000 extra mouths to feed a day. That’s two and a half days to get a city the size of Edinburgh. Improving production is part of the answer.”

In the early 1990s, Mr Tindale became involved in the world of GM, advising the Shadow Environment Secretary, Chris Smith, and drafted a paper called In Trust for Tomorrow. This argued that GM has some positive uses, such as pest resistance, and some less positive, such as pesticide resistance. His personal view, he explained, is that GM technology should be considered case by case: “It’s not about the technology; it’s about what it’s used for.”

Later, Mr Tindale was central to the development of farm-scale GM trials under the Blair Government. At that time, he was recruited to Greenpeace – appointed by some of the very people associated with the destruction of one of the trials. At the time, he regarded GM as a second order issue, but has since changed his mind and sees it as being of paramount importance to the future of society and the world. He eventually shut down the Greenpeace anti-GM campaign in the UK.

Mr Tindale said his views were greatly influenced by Professor Anne Glover, who pointed out that many green groups take seemingly contradictory approaches to climate change and GM. With the former, they say it’s vital to look at the science, the vast bulk of which says it’s real and manmade; but with GM they reject the science – which overwhelmingly says it’s safe. “The risk of inaction on GM is that many, many, many people will starve; many children will die. That’s not a risk I’m prepared to take,” he added.

A discussion then took place, in which Professor Haites asked the panel to address a series of key issues.

Where might people be confused between the technique of genetic modification and the genes that might be put into plants?

Professor Dunwell said “an aura of suspicion” has developed around the method. However, all our crops are the result of genetic manipulation that has, over millennia, yielded mutated varieties of the original plants. He said: “Using mutations and changing genes was something that was done spontaneously … it was identifying beneficial mutations that was the foundation of agriculture.” GM is a more precise extension of these techniques.

What sort of genetic modification would help with food security?

Mr von Westenholtz said the two most prevalent GM characteristics are insect resistance and herbicide tolerance; and more interesting ones, such as drought resistance, are on the way. Golden rice, which has great nutritional benefits, could be a major boon in the developing world.

Mr Tindale added that salt resistance could be advantageous with sea level rise. He added that if Golden rice achieves its potential, it would be patent free – answering GM critics concerned about the power of agribusiness. Turning to regulation, he praised the European Commission’s approach that emphasises safety but defers final decisions to member states.

Are there GM alternatives that could be developed fast enough to meet world need?

Many problems, such as under-nutrition and malnutrition can, at least in part, be addressed by other means, but often not as quickly or effectively, claimed Professor Dunwell. He also gave the example of how the nematodes which threaten banana crops in parts of Africa can currently only be tackled with toxic chemicals. GM could solve such problems. Professor Dunwell said: “Those are critical issues in regions where you have a crop or don’t have a crop (…due to pests).”

What else is happening to improve production and how does GM fit in?

According to Mr von Westenholtz, there are continued developments in conventional breeding programmes, but they take a long time. Modern precision farming techniques are also allowing the better targeting of pesticides and of planting to minimise chemical use and maximise yield.

What are the great unknowns we have to work on?

Mr Tindale said that climate change means we have to find ways to grow more food. This is essential in Europe, so we do not deplete supplies elsewhere. We also need to maximise the soil’s capacity to absorb carbon; this demands less tilling. The challenge, he said, was to find a high-yield, low-tilling, low-pesticide form of agriculture – something GM can potentially achieve. He added, however, that products such as Roundup Ready are potentially carcinogenic and should be banned.

Mr von Westenholtz defended Roundup Ready and said it is very safe – much more so than wine, chocolate or other products we are entirely happy about. He went on to say that educational issues on how to use products are vital to ensure safety – just as with any product or technology.

Can the use of GM for food products be clean and green?

The issue, according to Professor Dunwell, is what you put in, what comes out, its economic performance and any environmental impact. If these are addressed, then the answer is “yes”. A blanket ban, such as the one in Scotland, is damaging to the output of the country. “I think it is shortsighted to have an embargo that is not based on evidence …” he said.

There should, argued Mr Tindale, be a pragmatic and case-by-case regulatory approach.

Following an interactive audience exercise, the speakers took questions from the floor. Before the session resumed, Professor Haites addressed an issue raised by audience members about the panel being exclusively pro-GM. She said the aim of the evening was to provide scientific evidence about the technology.

Asked if the patents and regulatory systems could deny the world many major benefits, Mr Tindale said more public money should go on research – some could come from climate change funds. This would help tackle the problem that private companies might only find it worthwhile to develop GM if that had patents that allow them to make profits.

The panel was asked if population control is the essential issue and that anything else is ‘shifting deckchairs on the Titanic’. Mr Tindale said economic development and healthcare are good ways to control growth. High infant mortality means families have lots of children to provide care for them in old age, and lack of access to family planning stops them being able to control the number of children.

Mr von Westenholtz was questioned over the need to raise production when so much is wasted – should we not be focused on fairer distribution? He agreed that reduced waste, better distribution, and also diets, are essential elements in addressing world need. However, he added, current estimates suggest that there needs to be a 70% increase in production, alongside other measures, to meet the demands of population growth of two billion by 2050. 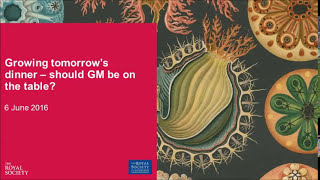