Sir Paul Nurse shares his thoughts on what he believes are 5 great ideas of biology.

Three of the great ideas of biology are the gene theory, the theory of evolution by natural selection, and the proposal that the cell is the fundamental unit of life. When considering the question of what is life, these ideas come together, because the special way cells reproduce provides the conditions by which natural selection takes place, allowing living organisms to evolve. A fourth idea is that the organisation of chemistry within the cell provides explanations for life’s phenomena. A new idea is the central role that information management plays in generating biological organisation.

Nobel Laureate Sir Paul Nurse was welcomed by the President of the RSE, Sir John Arbuthnott. The geneticist and cell biologist, who spent seven years of his early career in Edinburgh, looked at the history and interplay between a series of fundamental ideas in biology which shape our understanding of the nature of life.

Biologists tend to be more comfortable with detail than grand theories, according to Sir Paul. Yet their work has yielded great ideas fundamental to our understanding of life. His talk explored the development of four well-established concepts and pointed to a fifth, which he said has still to be adequately formulated.

“In a sense you can consider the cell to be life’s atom,” said Sir Paul. All life is composed of cells and they are the simplest units which exhibit the characteristics of life. The idea, like most he discussed, is an old one. It emerged in the 17th Century, when Robert Hooke, curator of experiments for the Royal Society, discovered plant cells while using an early microscope to examine a sliver of cork. One story suggests that he coined the term ‘cell’ because the small rectangular units reminded him of the rooms occupied by monks in monasteries.

An important leap forward came at the end of the 17th Century, when Antonie Van Leeuwenhoek first identified single cell organisms. This happened when he used a microscope to observe the bacteria in matter scraped from between his own teeth.

The next century saw advances in technology and scientific methods, and in 1839 the German scientist Theodor Schwann stated that the cell is the basic structural unit of life. Twenty years later, Rudolf Virchow added the recognition that cells are the simplest living organisms.

These two ideas led to our modern understanding of cells as the basic unit of life that underpins all reproduction and development. As the regular media stories about stem cells illustrate, it is an area of biology which continues to be of huge significance.

The Ancient Greeks noticed that characteristics are passed between generations. Nineteenth-Century plant breeders then strove to understand heredity. They had little success until scientist and monk Gregor Mendel applied rigorous scientific techniques. Focusing on the pea, he developed the theory that in the first generation after breeding, one characteristic tends to dominate over another. But the seemingly lost characteristic re-emerges in the second generation, but is outnumbered three to one by the dominant one.

Mendel proposed that particles (we now call them genes) are passed on through breeding which help determine character. Implicit in this was the idea of information transfer.

Mendel was neglected for 35 years until the start of the 20th Century, when three other groups reached similar conclusions. The intervening period saw research that placed his abstract ideas firmly within the realms of scientific observation. This included observations of chromosome behaviour during cell division, which led to the idea that they might be determinants of heredity.

The 20th Century brought rapid progress in genetics. In the 1940s, it was shown that DNA was the key hereditary material. The 1950s saw the identification of the double helix structure of DNA, and then Francis Crick’s statement of the Central Dogma of molecular biology, which explains the flow of genetic information through biological systems.

The gene as the basis for heredity is, said Sir Paul, a truly great idea. It not only allows us to explain how we are made up (our phenotype), but also has vast implications for who we are – the balance between biological predetermination and environmental influence.

This is “a very powerful and beautiful idea; probably the most important in biology,” according to Sir Paul. The theory states that life evolves and that this largely occurs due to natural selection. Whilst Charles Darwin contributed enormously to this great idea, it has a long and complex history. Indeed, his own grandfather, Erasmus (doctor, scientist and member of the Lunar Society), was amongst those who proposed that life evolved. Charles was essential because, where others had speculated, he gathered huge amounts of living and fossil evidence.

Darwin’s 1859 Origin of Species contains one illustration, a tree of life – the first clear demonstration that all life is related by descent. The idea of natural selection (also put forward by Patrick Matthew and Alfred Wallace) is simply stated. Darwin observed that many creatures are well adapted to their environment. He concluded that the best adapted are most likely to thrive, breed and pass on their characteristics to future generations. Changes accumulate and eventually give rise to new species.

Natural selection is dependent on cells and genes. Life must reproduce, it needs an hereditary system, and that system must allow for variability. It is cells and genes that hold the properties which allow this to happen.

The implications of natural selection go beyond its capacity to explain evolution, said Sir Paul. Kin selection, and the notion that sacrificing yourself for relatives who will pass on your genes, takes it into the realm of altruism and morality. And there is also the issue that as all life is related, humans should be good stewards for their entire extended family.

Whilst the theory of evolution tells us where life comes from, the idea of life as chemistry addresses how it works. An 18th-Century mechanistic concept, it displaced earlier ideas of “vitalism”. It shows that physics and chemistry can explain life and that it is not a mysterious other force.

Antoine Lavoisier (the founder of modern chemistry, who was executed in the French Revolution) was a central figure in the emergence of this great idea, thanks to his study of fermentation. This led him to recognise that cells carry out chemical transformations, that these are necessary to the cells, and are expressions of their life.

Explaining life in terms of chemistry involves an understanding that proteins act as catalysts, transforming one chemical into another. Sir Paul said that this is the basis of cell structure. He sees cells as “a myriad of chemical microenvironments”, with many compartments which allow lots of mechanical work and thousands of chemical transformations to take place simultaneously.

Life as chemistry not only provides an explanation of life, but is the primary paradigm for understanding diseases – seeing disease happening when something goes wrong with the chemical reactions. That thinking, in turn, is vital to how the medical and pharmaceutical industries approach their work to tackle disease.

Sir Paul said many biological phenomena can be described as interacting components (complex systems) and understood in terms of how information flows through them. These operate at all scales, from neuron systems in brains to whole ecosystems. Sir Paul concentrated on the cellular, as it is the basis for life.

The aim is to explain higher order biological phenomena such as homeostasis, communication, reproduction and even physical shape in terms of systems and information flow. Sir Paul said: “You need to translate the descriptions of the chemical and physical processes in cells into the underlying systems and the management of information within that system.” This encompasses the gathering, storing and processing of information and its use in determining the outputs of the complex system.

One example is DNA, which is only properly understood in biological terms when it is seen as a digital information storage device. Likewise, some biological systems act something like electronic circuits. However, they are more sophisticated and versatile than anything in a computer. Nonetheless, cells, said Sir Paul, are complex chemical systems which act as logical computational machines.

Biological systems are also dynamic, which radically increases their information management capacities. Whilst this means they can be hugely sophisticated, it is clear that they are not intelligently designed. They have many redundant features from the distant evolutionary past and have many imperfections.

In summing up, Sir Paul said that the issue of complexity may take biology into new areas of abstract theory, as happened with physics and chemistry. He concluded by saying that information and systems are likely to be hugely illuminating for biology in the future.

When will biology accommodate thermodynamics?

According to Sir Paul, it is important that biology is explained in terms of physics and chemistry. But he speculated that the next advances in biology may come from the better understanding of information and complex systems, rather than through chemistry.

A substantial minority do not accept evolutionary theory; does the fifth great idea let them off the hook?

Evolutionary theory is uncontroversial in many places, except where faith and dogma are treated as equivalent or superior to evidence-based science. Hopefully, this will diminish as science reveals even more about life and the Universe.

Of all the ideas, which is the greatest?

Evolution by natural selection is a beautiful idea. It explains how complexity can arise without creationism and is very rich in its implications. 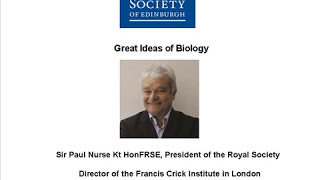