The Great British brain off

Our thinking skills change as we get older. Many people become increasingly concerned that slips of memory, such as entering a room and forgetting why, could be early signs of something more serious, such as dementia. Memory is extremely important, as it contextualises our lives and is vital in retaining our identity. However, memory is only one of many ‘thinking skills’. Others include imagination and creative thought, reasoning and problem-solving, decision making, learning new things, verbal skills and thinking speed.

Dr Alan Gow considers the recipe for the perfect brain, and what you can do if you feel your own grey matter needs some extra spice, answering questions about the ingredients that might protect or harm the brain as it ages.

The Great British Brain Off

Do you feel like your brain is half-baked? Or that your mental faculties are going off the boil? ‘Head’ chef Dr Alan Gow considered the recipe for the perfect brain, and what you can do if you feel your own grey matter needs some extra spice, answering questions about the ingredients that might protect or harm the brain as it ages.

Our thinking skills change as we get older. Many people become increasingly concerned that slips of memory, such as entering a room and forgetting why, could be early signs of something more serious, such as dementia. Memory is extremely important, as it contextualises our lives and is vital in retaining our identity. However, memory is only one of many ‘thinking skills’. Others include imagination and creative thought, reasoning and problem solving, decision making, learning new things, verbal skills and thinking speed. Dr Gow commented that our ability to use words is one of the skills most likely to remain intact into later life, even in people with dementia, although verbal expression may start to become more impaired with the progression of the disease. What is more likely to decline early would be our ‘thinking speed’. Not just in terms of how quickly we can recall things, but also taking in new information when this is often available to us for short periods of time, or reacting appropriately in a timely manner.

At what age do our thinking skills start to decline? The first noticeable changes occur in relation to ‘speed’, which peaks in our twenties and then decreases. However, changes in verbal skills may not be noticeable until much later, with many people continuing to accrue words to their vocabulary into later life. Thus, different kinds of skills age at different rates and at different ages. For fluid thinking skills, that are often thought to relate to the physiological capacity of brain to take in and process new information, there is a steep increase from birth until our twenties, followed by levels of stability and decline from then on. However, crystallised skills, such as those verbal abilities mentioned above, have more stability; once they are learned, they are often maintained across time.

As well as different thinking skills declining from different ages and at different rates, people differ too. That’s an important point in the study of the ageing brain: if everyone had the same rate of decline, it would be easy to predict change, as it would happen in everyone in a very similar way. But person-to-person variation suggests that there are many factors that affect how the brain ages. While we have no control over some aspects which affect thinking skills, such as genetics, we are more able to influence changes determined by lifestyle, behavioural or environmental factors. It has long been considered that learning new things assists in keeping the brain sharp and active. Indeed, brain training puzzles have been marketed as an ‘easy fix’ against mental decline. However, the tasks involved are very repetitive and do not really assist with learning new things or transfer to different abilities; rather, they are focused on specific activities which are improved through practice. Thus, scientific evidence does not support the benefit of these, though it remains a contested area. Dr Gow commented that the evidence seems to favour the idea that new activities need to be challenging to have benefit. Studies show that people who undertake challenging, intense, progressive courses of activities, for example digital photography or complex quilting in one of the big American studies, improved their thinking skills more that those who undertook more repetitive activities. However, it is also important to keep doing the activities you already enjoy; enjoyment is important and provides motivation to continue. Even if an activity does not improve your thinking skills, it will improve your quality of life.

Exercise is also vitally important to brain health, as it ensures better blood flow; the brain is an organ, albeit one that does some quite special things, and therefore relies on a healthy blood supply to deliver the things that allow it to function effectively. It is thought that one reason why people who exercise more often have slightly better thinking skills is because the brain is maintained in a healthy environment. Studies have also shown that people who do more exercise have more grey matter, the neuronal cells of the brain, and have healthier connective wiring between the parts of the brain, known as white matter. Some of the studies have suggested that a person’s level of thinking skills developed in early and mid-life might then be better protected though mid to later life in those who are more physically active. Indeed, an improved cardiovascular system leads to general better physiological and mental wellbeing, including response to stress, and these are just some of the routes that might also influence brain health.

Some lifestyle, behavioural and environmental factors are detrimental to the brain, while others paint a more complex picture. The effect of alcohol consumption on the brain is difficult to measure, as it varies from person to person and between backgrounds and cultures. Furthermore, alcohol consumption does not exist in a vacuum; its beneficial or detrimental effects may be compounded by other lifestyle factors. One study aimed at understanding whether different types of alcohol have different effects found that the results differed between men and women. In one study, alcohol consumption in women aged 70+ mostly derived from drinking wine, and women who drank a moderate amount had better results in tests measuring their thinking skills than those who drank nothing at all. In men, however, the results were more complicated. Those who drank a moderate amount of wine, sherry or port showed it to have a small benefit; however, those who drank predominantly beer seemed to do worse. These differences may not simply, however, be linked to the differences between types of alcohol, but to other environmental or behavioural factors. Moreover, aspects outwith our direct control, such as how well we are able to metabolise alcohol, may also affect the way alcohol either benefits or harms our thinking skills. Other research has suggested that people who tend to metabolise alcohol better seem to be those who receive a benefit from drinking a moderate amount. Excessive alcohol consumption, however, is more often damaging to thinking skills and is also associated with other negative social and health concerns.

Inactivity and disengagement from activities in older adults can also have a negative impact on our thinking skills. This can be a problem for many during retirement, when undergoing a transition from having a daily role to having to find a new structure to the day. Additionally, loneliness and social isolation can be a risk to mental health. However, as with alcohol, measuring the effect of social contact on thinking skills has proven quite difficult. Some people may be content with less social contact; there is a big difference between feeling lonely and being alone, and it has been suggested that the effect of these factors depends upon whether the person is getting the level of support and contact they desire. People reporting higher levels of loneliness often also experience more decline in their thinking skills; but it is still an open question of how much loneliness might drive the decline in thinking skills, or vice-versa. Traditionally, studies have shown that married people might benefit from interactions with their spouse in terms of their thinking skills.

Other factors that can affect thinking skills might include medication, diet, sleep and smoking. It isn’t clear how different side effects of medicines might impact upon thinking skill levels, and some medications might have indirect benefits if, for example, they help people to control high blood pressure. In terms of diet, Dr Gow commented that there is no ‘superfood’ silver bullet which will solve everything, and the public should be sceptical of any advertised claims of the latest ‘super berry’ to hit the market. A balanced diet of fish, some red meat, vegetables, nuts and pulses, all in moderation, continues to be suggested as the optimum for brain health. Sleep is important for health generally and, indeed, it is during sleep that we consolidate our memories. People all have different requirements for sleep and what is most important is that we achieve the right level for us as an individual, rather than focusing on a single ‘right’ amount. Many studies have been undertaken focusing on the effects of smoking, and while studies report short-term gains for thinking skills (increased concentration or reduced stress), these appear to be negated by the long-term effects of smoking, which have very recently been shown to affect the thickness of the outer layer of the brain. The research did, however, also show that people who had given up smoking seemed to experience some reversal of this thinning effect over time; the researchers suggested that after about 25 years, the brains of the former smokers looked more like the brains of those who had never smoked.

Dr Gow’s conclusion was that many lifestyle and behavioural factors can affect thinking skills. However, this can vary from person to person and at different rates and ages. Studies focused on determining which of these factors are the most important should assist with gaining new understanding, and benefit people in the future to improve and retain their thinking skills in older age. 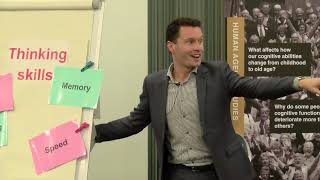 Supply and Demand for Medicines
Thirteen Fragments
RSE Research Awards made to 48 researchers whose work will benefit individuals, communities, and broader society.
Manage Cookie Consent
We use cookies to optimise our website and our service.
Manage options Manage services Manage vendors Read more about these purposes
Preferences
{title} {title} {title}