From gannets to pandas – 100 years of progress at Edinburgh Zoo

2013 marked the centenary of Edinburgh Zoo. There is justifiable pride in achievements that echo the evolution of zoos globally.

CEO, Chris West, is a highly respected and experienced vet and conservationist with international experience and has worked overseas. He reflects on the future challenges and diverse activities of zoos as they conduct scientific field programmes and education outreach in addition to breeding endangered species – and running major visitor attractions. In a world that is increasingly crowded, warming and damaged, the role of zoos is even more relevant as ’refugee camps’ and as centres for environmental awareness.

July 2013 marks the centenary of Edinburgh Zoo. Chief Executive, Professor Chris West took the opportunity to look back at how it has evolved and its role today as a “refugee camp” for endangered species as well as a major visitor attraction. The Professor, who was introduced by RSE President, Sir John Arbuthnott, is an international expert in animal conservation. He took up his current post last year after a career working in zoos from the UK to Australia.

Recently, Professor West looked down from Corstorphine Hill and imagined what it was like for Thomas Haining Gillespie at the start of his enterprise to create a zoological garden for the “abiding benefit” of the people of Edinburgh and Scotland. He believes that while the Zoo’s founder would be pleased at its progress, he would be horrified at the devastation humanity has wrought on nature. The natural world he wanted to share is now “battered and shrunken and under increasing threat”.

Reflecting on the speed of change, the Professor said that 100 years before Gillespie began work there were fewer than a billion people in the world. The Industrial Revolution was taking off and an American ornithologist observed a flock of passenger pigeons so vast it took three days to pass overhead. By 1913, Martha, the last passenger pigeon, was in a Zoo cage and the western world was descending into industrialised warfare of unparalleled scale.

The first resident of Edinburgh Zoo was a young gannet blown ashore at Leith and bought for 18d. This was followed by an array of animals hired from a travelling collection which arrived by train before being paraded through the streets to the Zoo. Among them were wolves which staff unloaded into their new home – but soon found wandering free, having failed to realise they could tunnel straight through the earth floor.

At around the same time, a relationship began with the Salvesen whaling fleet, which began collecting penguins and seals in the South Atlantic which were brought to the Zoo. These, along with a gannet, became part of the Zoo’s coat of arms. It was also the origin of Edinburgh’s continuing position as a world leader in the understanding and conservation of penguins.

Penguins have become one of the most famous attractions at the Zoo. This is in part because of the penguin parade, which began in 1951 when a keeper accidentally left the enclosure open and then discovered he was being followed along Corstorphine Road. Affection for them is so great that one of the king penguins, Sir Nils Olav, has been appointed a colonel in the Norwegian Army.

In its early decades, the Zoo gave visitors an otherwise impossible opportunity to meet animals from the wild and understand more about them. Times have brought changes – gone are the chimps’ tea parties and the emphasis is now on replicating naturalistic conditions and encouraging natural behaviour.

The two world wars brought pressures, including rationing for the animals. Many men were away fighting, but there were still crowds of visitors – people had few holiday options and fun days out were valued. Demobilisation after the Second World War brought a new arrival and a well-deserved retirement for Wojtek, a bear enlisted in the Polish regiment which had travelled with the troops from North Africa to Italy. “There are even some remarkable photos of him man-handling artillery shells during the battle of Monte Casino,” said Professor West.

The Professor then paid tribute to Roger Wheater, “the man who brought Edinburgh Zoo into the modern era”, putting the focus on conservation and welfare. During his 26 years as CEO, the Royal Zoological Society of Scotland which runs the Zoo, also took on the Highland Wildlife Park. During this period, the arrival of high-quality TV documentaries helped nurture public interest in animals and their natural environments. Figures such as David Attenborough, Jane Goodall and Gerald Durrell went on to become champions of well-run Zoos as centres for education and the preservation of endangered species.

Growing knowledge and awareness brought debate about conditions and Professor West said Edinburgh made the right decision to stop keeping certain species because it lacked the space – “if you can’t do it properly, you shouldn’t do it”.

The role of the Zoo today is far broader than in the past and includes:

As a charity, receiving no government money, the Professor said the Zoo needs to attract visitors and financial supporters in order to pay for its work. One example is its efforts to breed Sumatran tigers. Captive breeding may be their only hope of survival as current trends mean “it’s likely that tigers are going to die out in the wild in the next 10 to 15 years”.

One of the biggest changes in the history of the Zoo has been the creation of the Budongu Trail. This state-of-the-art centre offers chimpanzees a high quality of life free from hunters and habitat destruction. Rather than standing alone it is twinned with a field station in Uganda, where the Zoo supports chimps in the wild.

The Zoo is also a leader in genetic research, including for Scottish eagles. It is also cooperating with governments to combat poaching. Discussing some of the threats to species, the Professor described the medicinal use of rhino horn as “absurd”, saying it is nothing but “powdered toenail”. Marketing, weddings, shop sales, sponsorship and other activities are all essential to raise funds for conservation. So too is the presence of animals such as meerkats, which are not endangered but – like having big name bands at music festivals – pull in crowds who then enjoy the less famous animals.

Professor West then turned to a discussion of the current state of the planet and the change which humans have brought. When agriculture first emerged, people build fences to keep out the wild. The seesaw has tipped and we now build fences to keep the remaining fragments of the wild in.

Around half of all animal and plant species have been lost and the rest are declining at 1% a year. The cause is the immense and inequitable level of consumption and a rapidly expanding human population. Decline in nature endangers humans – around a billion people rely on sea fish for protein, yet stocks are heading for collapse.

Despite the sense of detachment from nature which comes from urbanisation, we depend on it for survival. Its degradation threatens us, whether through the loss of phytoplankton which clean our air and water, or the loss of trees and environments that act as buffers against hurricanes and tsunamis. Nature brings benefits estimated at $3 trillion a year, but is not factored into human activity.

Zoos, according to Professor West, can play an invaluable role in the future by reconnecting people with nature and encouraging them to recognise their place in a natural world. They are well placed to do this because they are at the heart of communities, attracting visitors from across the socio-economic spectrum.

In order to fulfil its potential, the Zoo needs to modernise. A review is taking place which is looking at which species are kept and their habitats. Professor West said it is currently a little “fur and feather heavy”, so the future may bring more emphasis on reptiles, amphibians and fish. At the same time, the Zoo wishes to continue to become increasingly active at the frontline of conservation.

One immediate example is the panda breeding programme and the attempted artificial insemination of the Zoo’s female as part of the international drive to save them from extinction. With just 1,600 remaining, every birth matters. The pandas are also immensely popular with the public, and the money they have helped raise has allowed the Zoo to improve the penguin pool. Thanks to their presence, the Zoo expects to be able to fund other important projects.

Looking ahead to 2113, Professor West said he hoped people would be able to look down from Corstorphine Hill on a Zoo which continues to be successful and valuable, but also on a world that has transformed its relationship with nature.

It will soon be possible to clone and revive extinct species – should we do so?

The Professor has doubts and expressed the need for an ethical approach. Many of the habitats the extinct species relied on are gone. Also, we understand relatively little about what animal behaviours are innate and what are learned. Would a mammoth know it was a mammoth? Would we just be creating freaks?

Asked about artists in residence, the Professor said there has been a lot of discussion about this and the potential for using art, drama and poetry to create an emotional link with nature.

Can we be more effective in stopping the destruction of species such as rhinos and tigers for so-called medicines?

The Professor said “frontal charges” based on Western values simply hit a brick wall. He sees hope in the changing attitudes of young people who are turning against these practices.

Asked if constructive engagement can really work when species are in imminent danger of extinction, the Professor agreed that there are cases where a full range of approaches is needed. These can include campaigning, better law enforcement, political pressure and protection on the ground.

On whether there will be major structural changes at the Zoo, Professor West said a process of renewal will happen over time. The review process will emphasise a variety of issues from conservation through to visitor experience. 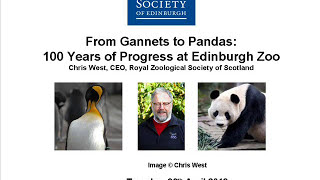