In 2012, the laser had just turned fifty. Today, it can produce the highest peak power measured in Petawatts or 1000 times the world’s grid power. It delivers this gargantuan power in an extremely short duration counted in femtoseconds. This power can be focused over a small fraction of a hair size to produce the highest intensity, the highest pressure, the highest electric field, the highest acceleration, and the highest temperature. It can also produce high-energy particles and radiations. However, in its first fifty years, it was mainly limited to the study of atomic structure. The extreme characteristics that are provided by today’s extreme light laser offer a new paradigm to Fundamental Physics for the investigation of the deeper strata of matter, as the nucleus, the nucleon and the vacuum.

Professor Gérard Mourou traces its development from the early 1960s up to the present, revealing how much it’s progressed through the years – and some of the mind-boggling research the laser is helping to drive, including breakthroughs that could help to illuminate the mysteries of fundamental high-energy physics.

The laser is just over 50 years old and Professor Mourou traced its development from the early 1960s up to the present, revealing how much it’s progressed through the years – and some of the mind-boggling research the laser is helping to drive, including breakthroughs which could help to illuminate the mysteries of fundamental high-energy physics…

Just when you think you know what a vacuum is (and understand quantum physics), along comes Professor Mourou, a pioneer in lasers, to enlighten you further. Thanks to remarkable advances in technology over the last 50 years, the laser is now on the brink of a new era of discovery, not just helping physicists study the nature of matter but also, confirming the existence of mysterious things such as dark matter and dark energy, by shining lasers into a vacuum to observe the effects. After helping scientists study the structure of solid materials (e.g. quartz), lasers will soon be used to study nothingness – or reveal that there is ‘something’ in the vacuum after all.

The concept of the vacuum has evolved over thousands of years. Plato and Aristotle asked “how could nothing be something?” and concluded that a vacuum was impossible. In developing his theory of universal gravitation, Newton thought that the refraction of light in space could only be explained by the existence of “aether,” while Maxwell said that if this was correct, then aether must be “hard as rock.” Einstein’s theory of relativity suggested that aether was not needed at all to explain the passage of light through space, but Lorentz and quantum physicists later suggested that something like aether may exist after all. “The laws of physics are encoded in a vacuum structure,” said Mourou. And if we can observe the “bending” of lasers inside a vacuum, by firing a single, very powerful pulse, it would tend to suggest that there is indeed more than meets the eye in a vacuum, since if the vacuum was empty, the lasers would go in a perfectly straight line.

“We will now do the same with lasers in a vacuum as we once did with quartz,” said Mourou. “And when we do the experiment, if we observe deviations (i.e. a non-linear effect in large electromagnetic fields), we will need to explain them.”

The evolution of lasers

Mourou’s talk focused on the evolution of lasers and the kind of research made possible since lasers first appeared in 1960. At that time, laser photon energy had the power of just one electronvolts (eV), compared to nowadays, when scientists are aiming to develop lasers capable of producing radiation in the KeV and MeV regime and particles in the evt and even the ENP (teraelectronvolts and petaelectronvolts) range – a million million or a billion million electronvolts.

Laser research has also gone in two different directions. It was used at first to slow down or cool atoms, looking at phenomena such as cold atoms, as well as atomic, molecular and optical physics; then it was to accelerate particles to very high energy levels, challenging the speed of light. Mourou described these two fields as “30 orders of magnitude apart,” from FeV (10-15 eV ) to GeV (109) and, in the not so remote future, ENP (10 )15).

Mourou then traced the history of “non-linear optics”, a phenomenon first observed with lasers in 1961 that could ultimately lead to a better understanding of the structure of matter and the laws of physics. As Mourou said, “We all come from a vacuum – the mother of all things.” The name of the game, he said, is how to make real particles from virtual ones, using peak-power lasers, with IZEST (the International Center of Zetta-Exawatt Science and Technology) leading the way in a new area of study called ‘ultra -relativistic optics’. In the 20th Century, physicists focused on particles with mass and charge. The 21 st Century will be “the photon century”, focusing on massless and chargeless particles, using ultra-short, ultra -fast pulses of radiation from very large-scale lasers to produce very large fields and induce very large disturbance in atoms and nuclei, and finally observing the effects in vacuum.

As a measure of progress in the near future, lasers will increase in power, “climbing the curve” from what is possible today (10 22 eV) to what is called “extreme light” (1022 eV and beyond), “when electrons and protons get excited and start to polarise the vacuum.”

Mourou then talked about “chirped pulse amplification” and how scientists have “stretched the short pulse a million times” over the last 20 years – in other words, the power of the laser is intensified by amplifying (a billion times) and then compressing (a million times) the light. “To get peak power,” Mourou said, “you must decrease the pulse duration (to maximise intensity), and to decrease the pulse, you first must amplify, to increase the intensity.” At this point you can produce nonlinearity in the medium that will result in shortening the laser pulse. The pulse will be so strong that it will accelerate the electron forwards at almost the speed of light, also dragging the ions behind.

According to Mourou, the technology has advanced so much that a laser-plasma accelerator producing GeV (gigaelectronvolt or a trillion electronvolts) electrons can now be fitted in the palm of the hand. Based on the technology available in 1954, an accelerator that would have girdled the earth would now be only 1 km long. IZEST, he added, plans to reach 100GeV in a the near future, as an intermediary step towards one TeV – and the prospect of looking at dark energy and dark matter, thanks to laser-based high-energy physics which will be able to produce short bursts of protons, neutrinos and gamma rays, inside a vacuum. One ENP may be “a tall order”, said Mourou, but one day will be possible. And if we can use lasers to make holes in a membrane, why not in a vacuum?

“If we don’t find what we expect to find,” added Mourou, during the Q & A session which followed, “then dark matter may explain things.” 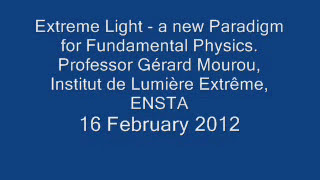