Societal demands on the environment are increasing. Food, water and environmental policies encompass the basic commodities for life and are important for the Government. Sustained innovation at rates matching rising demand without degrading natural capital is challenging. Evidence-based policies should have a pivotal role in the policy cycle. There are many successes, important failures and lessons for the future. Scientific discovery is inherently uncertain. It is important that models and processes account for uncertainties, support progress and reduce over-precaution.

Food and environmental policy makers – and those advising them – have their work cut out in a world beset by challenges. In a lecture that covered serious issues including food security, bovine TB and the – alleged – decline of the bumblebee, Professor Ian Boyd, the Chief Scientific Adviser to Defra, made the case for a shift to putting science at the heart of policy.

Defra (the Department for Environment, Food and Rural Affairs) is the most important department in government: if governance of civil society has one function, it is to make sure its public has the basics of life – food, water and a clean environment. That, said Professor Boyd, is what Defra does. “Other things are important, but if you don’t supply the absolute basics of life, you are failing as a government.”

Delivering the Peter Wilson Lecture, Professor Boyd outlined some of the challenges facing Defra – where he has been Chief Scientist for six months – and looked at the ways it is addressing them. He also gave a glimpse of the department’s future strategic direction.

Defra is working on a new research strategy, he said, which will be published this year. It is likely to focus on three areas: food and water security; disease (including animal disease such as bovine TB, and plant disease such as ash die-back); and environmental stress. These issues will be tackled in a variety of ways, including systems and data analysis and modelling.

Professor Boyd said he was in almost daily contact with ministers, who live in a world where things happen very quickly. He described the policy cycle – essentially from recognition of an issue, through to coming up with a solution and putting it in place, then evaluation. Today, science tends to sit in the latter part of the cycle (evaluation), whereas it should rightly be at the start, at the strategic stage, to ensure that policy is evidence-based. He wants to see a shift from policy-led science, to science-led policy.

At the same time, it’s important to be clear about what science can – and cannot – do, and to be open about limitations in knowledge and about uncertainties. Failing to be honest about uncertainties can lead to poor decision making, and a subsequent loss of public trust in science as an objective source of information.

Professor Boyd described his own job under three main areas of operation: risk management; cost-benefit trade-offs; and stimulating innovation. There are various constraints; for example, the difficulty of communicating complex ideas – including the meaning of risk. Regulation can also be a constraint, as can the long timescales involved; persuading people to make decisions today when the pay-off may be decades away is challenging. But if a bright young scientist has an idea today, it might be 20 years before it translates into practice. For example, bovine TB will take four decades to deal with, but people want solutions “tomorrow”, he said.

He spoke about regulation, which, although well-intentioned, was not always evidence-based and could have perverse consequences. In particular, he referred to the EU Habitats Directive, which he said had idealised objectives, but wasn’t evidence-based, and was inflexible – the ingredients for policy failure.

He quoted Kuznets’ theory that as we become more wealthy, our environmental impact increases, but then levels off and begins to decline – the idea being that wealthier nations have more cash to plough into environmental policies. Critics of this theory point out, however, that as nations become wealthier they will ‘export’ their environmental impact to poorer countries, which simply involves transferring one’s carbon footprint, rather than reducing it.

We live in a world in which there are risks, some of them very serious. Even if we are geographically distant from many of these risks (of volcanoes and tidal waves, for example) the global economy means that we will likely be affected. We have to be alive to global challenges, and recognise the impact that something which happens thousands of miles away can have on us.

Food security is a very real issue, and we have to consider whether our own house is in order. Europe used to be self-sufficient in terms of food – now it isn’t – and the UK hasn’t been self – sufficient for a long time. All of the challenges mentioned above (e.g. population growth) are only going to make food security more challenging as stress in the system is increasing.

So how do we deal with the challenges? There are technical solutions, and we should be encouraging innovation – for example, with a research focus on increasing production and efficiency. Other key solutions include waste reduction at all stages of the supply chain, including in our own homes. Another solution could be “making the average into the best” – that is, encouraging all producers and others to perform as well as the top few, in terms of efficiency. “This is a particular bugbear of mine – it’s about education, and encouraging early adopters,” Professor Boyd explained.

Professor Boyd referred to the UK National Ecosystem Assessment (2011), which warns against undervaluing our ‘natural capital’ and calls for a move to more sustainable development. But there are difficult trade- offs: by pursuing a ‘greener’ agenda, we might harm food production. “Do we want to eat, or do we want a green environment?” he asked, acknowledging that the answer would be somewhere in the middle.

Part of Professor Boyd’s job involves making judgments based on future scenarios – what’s the worst that can happen? The plausible worst-case scenario for bovine TB is “not pleasant”, he said, and the disease could, in the future, infect humans. The sad thing is that we had it under control in the 1980s, but let it go again in the 1990s, he added. Testing stopped for a short period during the 2001 Foot and Mouth outbreak, which showed how fast the disease could spread if controls are removed; but even with those control in place, rates of infection continue to grow.

There are four main areas of activity in trying to get a grip on this disease: tuberculin testing, vaccination, biosecurity, and wildlife control. It’s this last which is the most controversial, with Defra’s decision to proceed to a badger cull attracting widespread criticism. Although vaccination (of cattle) is likely to be the most effective preventative tool, there are challenges – you can’t trade vaccinated cattle with Europe, because they can’t be tested effectively. An alternative has been found, but will take a minimum of ten years to get a usable vaccine, and it is only likely to be around 60 per cent effective.

A badger cull is a “blunt instrument”, but pilot culls have shown it is effective, although only around 16 per cent so. Even if cattle were vaccinated, it wouldn’t be an alternative to culling badgers, because the reservoir of infection would remain – and in any case, the route of transmission isn’t clear, he added.

Tree disease is another acute problem which, while it is important, is not something that can be eradicated, he said. “We can do our best to stop it, but we’ll continue to get tree disease.” Professor Boyd ended by talking of the decline in numbers of pollinators, because, he said, it illustrates the dilemmas facing policy makers and scientific advisors. The evidence that there is an actual decline is poor, but the assumption is that it’s happening. Pesticides called neonicotinoids have been blamed, and campaigners have been calling for a ban. Banning these pesticides would mean a loss of up to 30 per cent in productivity of some crops. Although there have been laboratory-based tests which show that these pesticides are toxic to bumble bees, this isn’t surprising, as they are designed as insect neurotoxins.

There isn’t, however, good evidence that the pesticides have an impact in a field situation. Testing hasn’t so far shown an impact – so do you keep testing and testing to look for an effect, or do you walk away? Bees have become a single-issue iconic case for those wanting a ban, but there’s a poor evidence base for it, he said. What’s more, it would cost the farming industry up to £400 million – and we might end up exporting the problem if a ban were to be introduced here. There is, of course, however, a chance that the campaigners are right. “Let me leave you with one thought,” said Professor Boyd. “How would you advise the minister?”

Questions covered issues including bovine TB, food security and the future of organic farming. Asked about whether genetic selection of cattle for resistance to TB was part of the answer, Professor Boyd said that this was one of “a large basket” of measures included under the heading of biosecurity. There are questions about why, even in areas of high bovine TB, 40 per cent of farms aren’t affected. Are they doing something different? Could it be copied by other farms?

On the possibility of the EU introducing a ban on neonicotinoid pesticides, Professor Boyd was asked if there was any way for Britain to resist any ban and carry on using them. “Technically, no,” he responded, adding that a decision to ban the pesticides would not be evidence-based. Asked what part supermarkets play in shaping food and agriculture policy, Professor Boyd said it was outside his remit, but that there were positive relationships between Defra and supermarkets along the food chain – even over things such as the recent horse meat issue.

Asked how he was going to achieve his aim of moving to science-led policy, Professor Boyd said he was starting with a clean sheet, and that the new evidence strategy would be significant. He wants Defra, and funding councils, to pay for research that has long-term consequences, tackling issues which should prevent bigger problems in the future. He sees funding councils and research bodies – such as the James Hutton Institute – as important natural partners for Defra.

Answering questions about organic food, Professor Boyd said that it was simply not as productive as intensive agriculture. He argued for an “intelligent mixture”, where intensive agriculture and organic production learned from each other and grew closer in their methods and output.

We are trading not just goods with Europe, but disease too, said one questioner. Professor Boyd said we can’t stop it – so we have to learn to deal with it, to build in resilience.

Returning to the badger cull, Professor Boyd was asked why the focus wasn’t on vaccination, since the figures he quoted showed it would have the biggest impact on cutting rates of bovine TB. He said that a number of methods and approaches were needed, and that vaccination alone was not the answer. “It’s a really serious disease and we can’t pull punches on it,” he said. 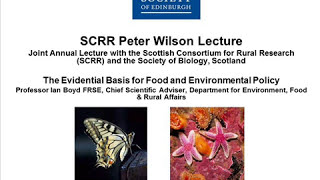