This year’s MacCormick European Lecture, named in honour of the late Professor Sir Neil MacCormick FBA FRSE in recognition of his contribution to Scottish and European politics and his international work for the RSE, will be delivered by the Rt Hon Lord Patten of Barnes CH. During his career Lord Patten has been an MP; Governor of Hong Kong, overseeing the return of Hong Kong to China; Chairman of the Independent Commission on Policing for Northern Ireland; and European Commissioner for External Relations. Lord Patten is Chancellor of Oxford University and a Life Peer in the House of Lords. 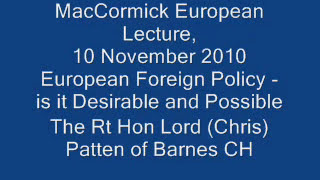