Energy, entropy and the human enterprise

While many believe we are destroying the planet, Professor McInnes believes human beings are intelligent and innovative enough to make much better use of our available resources and build a future world much greater than the sum of its parts. Key to this ambitious human enterprise will be the more efficient harnessing of powerful new energy sources, combined with new technologies to mitigate the worst effects of carbon emissions.

Thinking humans have good reason to be optimistic

While many pessimists believe we are destroying the planet, Professor McInnes believes human beings are intelligent and innovative enough to make much better use of our available resources – and build a future world much greater than the sum of its parts. Key to this ambitious human enterprise will be more efficient harnessing of powerful new energy sources, combined with new technologies to mitigate the worst effects of carbon emissions…

Human beings have succeeded by transcending the boundaries of the environment rather than accepting them as limits, said Professor McInnes. And if we can continue to transcend them, the “human enterprise” can prosper into the very deep future.

“While the sometimes-misanthropic hues of contemporary thinking see humanity as turning nature into dead matter, it could well be humanity that turns the dead matter of a cold and dark Cosmos into conscious, thinking life,” he concluded. Innovation and our more efficient use of energy have driven economic growth until now, and will also be key to the future.

To reach this optimistic conclusion, Professor McInnes began by describing how the Earth first evolved and the first thinking humans emerged. When the planet was still very young, dead matter organised itself into molecules that could replicate themselves, storing and transmitting information. Early life photosynthesised, “polluting” the planet with oxygen and leading to chemical disequilibrium, but also to the emergence of the first conscious life. “What were once dead atoms of carbon and hydrogen, and oxygen and nitrogen, self-organised to such an extraordinary degree that they literally began to walk the Earth.”

Life on our planet has evolved by learning from the dead ends of the past and coming up with clever new ideas. “Unthinking biology” is marvellous, but the emergence of thinking humans – and “modern-day alchemists” – led to a spiral of growing complexity, improving upon the productivity of nature by using energy to imprint our ideas on the world and therefore change it – such as making metal tools. “Nature uses mostly organic materials to build wonderfully complex structures, but humans use the entire periodic table”, said McInnes.

Human progress has been rapidly gaining momentum, starting off with agriculture, then the Neolithic Revolution and industrialisation, which has led to huge improvements in efficiency, as well as smarter use of resources – for instance, from the one per cent efficiency of the Newcomen steam engine to the 60 per cent efficiency of the latest gas turbines. Humans realised the future could be different from the past, and the human enterprise “escaped from the photosynthetic limit of biomass”, moving on from wood to coal, then to oil, gas and nuclear fuels – increasingly compact means of delivering energy.

We needed lots of human labour to get diffuse energy from wood, but we “escaped from the Malthusian trap” by moving to energy-dense coal. Coal, combined with Enlightenment thinking, enabled the Industrial Revolution – and progress at a speed and on a scale the world had never seen before. From 1830 to 1875, energy consumption per capita more than doubled – a phenomenon later repeated in China, when 700 million people were lifted out of poverty. This was “the single largest achievement in poverty alleviation in human history,” according to McInnes, and none of this would have been possible had wood still been the major source of energy.

“The continued availability of energy-dense fuels today is, of course, an overwhelmingly civilising and liberating influence,” McInnes continued. “By replacing carbohydrate-fuelled human labour with hydrocarbon-fuelled machines, many of us have been freed from the land to think, innovate and create in a virtuous circle of prosperity.”

Surveying the progress from carbon-rich fuels such as coal to hydrogen-rich fuels such as methane, McInnes pointed out that even great scientists like Lord Kelvin can sometimes get it wrong – he believed that if we continued to burn as much fuel as we were using in the late 19th Century, we would use up all the oxygen on Earth within 400 years.

It takes time to develop new energy sources, McInnes continued. For example, in the OECD nations, coal did not overtake wood until about 1870, and oil only overtook coal in about 1960. Developing nations are still in transition from wood to coal, but if methane becomes more widely available, it will replace coal and further reduce air pollution, even being suitable for use in transportation.

But even though the world is gradually improving energy efficiency, total carbon emissions are rising. And McInnes said “nuclear wins hands down” over all other fuels, with the latest technologies greatly reducing the waste it produces. “We have only scratched the surface of nuclear power,” he said, and a new generation of fast-spectrum reactors will improve efficiency even more in the future. “There is no shortage of resources,” he added, “but we need vision to use it.” We will need to burn hydrocarbons for some time to come, but nuclear power is the only scalable solution and the best way to provide constant base load power.

McInnes then put attempts to decarbonise into perspective, explaining that renewables pioneer Denmark still produces more carbon emissions per head than nuclear pioneer France. Also, even though it did not sign the Kyoto Agreement, in recent years the USA has been the only country in the world to succeed in reducing its carbon emissions – thanks to shale gas. McInnes thinks renewables “are not up to the job yet,” partly because they need “colossal inputs of steel, concrete and land.” Climate change may be a major challenge, he added, but “we need to balance the real but uncertain risks against the known certainty of crushing poverty.” Economic growth, made possible by easier access to power, delivers valued services such as health and education.

The pessimists believe that future growth in energy consumption could lead to collapse as we reach our environmental limits, said McInnes, and that “infinite growth on a finite planet is impossible.” But history shows us that despite a huge increase in world population, the standard of living improves all the time as we make better use of resources, and turn “dead matter” into something useful. For example, we’ve evolved from using stone tools to smartphones, yet the smartphone is made from some of the same raw materials, including silicon. “Value has been added to a finite amount of dead matter”, he said. The key is innovation and our ability to rearrange matter into more productive forms. “Innovation can provide more with less.” Thinking humans have created even more complex forms than unthinking biology, and improved exponentially – for example, the bandwidth provided by satellites compared to early telephone cables. “We have replaced matter with energy as a communications medium.”

As the economy and energy consumption continue to grow, we become more able to afford the technology (such as catalytic converters) we need to minimise pollution and wastage, including carbon emissions. We can innovate and find new ways to deal with “the metabolism of our own energy systems,” McInnes continued. For example, in the future we could engineer the deserts and the unproductive parts of the oceans and, in the process, we would also improve food production, as well as create new energy sources. The planet is never in a state of equilibrium and the human enterprise is an integral part of the system, innovating and adapting; not just to survive but also to thrive.

Finally, McInnes suggested that geoengineering could even be extended to the “greening” of Mars. “Unthinking nature stumbles from one catastrophe to another,” he added, “but it’s our duty to carefully reconstruct nature so the biosphere can prosper.” Photosynthesis polluted the planet with oxygen just as we have polluted the planet with carbon, but we have the ability to do something about it. It is “natural” for the planet to be in a state of disequilibrium, but “there is no ‘Mother Nature’”, McInnes declared. “If there were, she would as soon see us dead as alive.”

On the largest of length scales, said McInnes, Space is silent and the stars appear dead. “It may be that only thinking humans have self-organised from the curiously low entropy state of the early Universe,” he continued. “As thinking humans, we have woken up from dead matter to self-organised, conscious life, only to find ourselves alone, in a dark and apparently empty room.” And if we are alone, we are more precious and exquisitely unique than we could imagine. “We should look beyond the parochialism of the present, and see a clear purpose and direction of historical travel,” he added. The human enterprise is still in the first flourish of youth and rather than killing the planet, we can have a bright future ahead.

The Earth may be in a state of disequilibrium, but judging by our attempts to “tamper with” the economic system, how confident are you about our ability to tamper with nature?

This is the crux of the debate about geoengineering, but rather we’ve hardly dipped our toe in the water. For example, experiments in ocean fertilisation would not be dangerous, but rather the first small steps towards a solution. Carbon emissions won’t fall any time soon. There is still unmet demand for carbon-based energy services, which will lead to improved educational opportunities, greater prosperity and longer lives. Climate change is a real threat, but we must square that with the drive for improved services and prepare for the changes ahead.

How can we encourage innovation?

We need a fire hose of ideas and should not solely focus on the near-term economic impact of research.

Are you optimistic or pessimistic about climate change?

The irony of the discussion is that the USA is the only country which has managed to decarbonise recently, using shale gas. We should aim to eliminate coal, not gas, and we can do so by using a combination of gas and nuclear power.

Scientists didn’t do a very good job of explaining genetic modification – the world was against them. Public trust in politicians, financiers and scientists is not very high. How do we help people understand the issues involved in the energy challenge – for example, the arguments for shale gas and nuclear power?

One good example is a film called Pandora’s Promise, which addresses the nuclear issue from an emotional, not a scientific, point of view. It is an emotional issue because so many people fear the unknown. The best way to explain issues like this is to stay away from numbers and use analogies and practical examples instead – such as Denmark versus France in the fight to cut carbon emissions. Another good example is the Torness nuclear power station in East Lothian, which produces more electricity in a year than all the wind farms in Scotland added together, on an area the size of a modest industrial estate.

Is the UK working on thorium reactors?

There is some research going on in the UK, looking at accelerator-driven thorium reactors. If successful, this would mean safer and also more efficient nuclear power.

What about fusion power?

This is a technology which will still take many years to come to fruition, but progress has been steady. 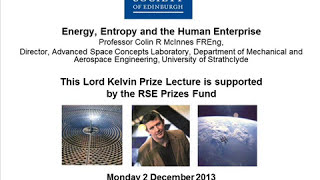