Home » Resources » Video » Cures and curiosities in arthritis – towards a brighter future?

Cures and curiosities in arthritis – towards a brighter future?

Professor Iain McInnes FRSE FMedSci discusses the critical interface between clinical medicine and drug discovery that, appropriately harnessed, can transform the lives of people with these debilitating diseases.

Care and curiosity are intimately linked, according to Professor McInnes, who is a staunch believer in doing research in tandem with being a practising physician. His talk emphasised the rapid progress that has taken place in arthritis treatment in recent decades, thanks to the constant questioning and curiosity of researchers.

Many advances have resulted from an increasingly sophisticated appreciation that immune systems adapt and change; that organs require different immune responses; and of the differences whereby immunity can contribute between diseases. These, and a growing understanding of how to target inflammatory illnesses, are opening the way for personalised medicine.

Cures and Curiosities in Arthritis: Towards a Brighter Future?

The evening was introduced by RSE President, Dame Jocelyn Bell Burnell. She presented Professor McInnes with the 2015 RSE Sir James Black Medal for his outstanding contribution to immunology through his work in establishing the GLAZgo Discovery Centre, which aims to create better medicines for patients. A Professor of medicine, and Professor of rheumatology, his research focuses on the mechanisms of inflammatory synovitis in arthritis. He also leads a translational programme encompassing basic cellular immunology through to clinical intervention.

Care and curiosity are intimately linked, according to Professor McInnes, who is a staunch believer in doing research in tandem with being a practising physician.

His talk emphasised the rapid progress that has taken place in arthritis treatment in recent decades, thanks to the constant questioning and curiosity of researchers. He then considered the future prospects.

Many advances have resulted from an increasingly sophisticated appreciation that immune systems adapt and change; that organs require different immune responses; and of the differences whereby immunity can contribute between diseases. These, and a growing understanding of how to target inflammatory illnesses, are opening the way for personalised medicine.

The first part of the lecture looked at the progress in rheumatoid arthritis (RA) research and treatment and the challenges it has faced. The second looked to the future and the reasons for optimism, not least thanks to the Scottish collaborative research model.

As recently as 1987, the prospects for RA treatment seemed poor, with a paper in The Lancet declaring that the concept of ‘remission-inducing’ drugs was a fallacy. In the years that followed, RA started to be understood as a syndrome, as well as the cause, of painful, swollen and grossly damaged joints, because it also led to vascular disease, higher rates of stroke and lung cancer. “So rheumatoid arthritis not only causes functional loss, but also loss of life expectancy,” said Professor McInnes.

In the last decade, there have been important advances, as treatments have been found to reduce inflammation and damage. This, in turn, has cut the number of strokes and heart attacks. However, Professor McInnes said much remains to be done – a typical person developing RA may now be able to continue working, but too many are unlikely to do so for more than three to five years. “Preserving quality of life remains an imperfect science in our care models”.

For many decades, treatments were of limited benefit and often toxic – such as injected gold, or penicillamine. Fifteen years ago, the situation was revolutionised by the discovery of anti-TNF (tumour necrosis factor) therapies. Professor McInnes said, however, that the new treatments that followed brought a 70% improvement for only 20% of patients.

As RA is an illness in which the body’s cells are attacked by its own immune system (he regards it as akin to the immune system having a stroke), researchers have been revising their understanding of how it works. In the past, it was often regarded as static, but it’s now understood that it adapts and changes to meet perceived threats. This, said Professor McInnes, is vital, because drug development has been carried out on the basis that the immune system uses cellular pathways that remain the same over time. He described research carried out by his team over many years that has revealed the interplay of cells. For example, that T cells, proteases sensing the environment, products of cholesterol metabolism and damaged products all talk to macrophages, that in turn drive damage.

The team also became interested in micro RNAs (miR-155). Micro RNAs bind to conventional messenger RNA, and can co-ordinate the expression of many different proteins. Professor McInnes said: “They are the molecular equivalent of FedEx, the antithesis of British Airways baggage handling, because micro RNAs will get everything where they are supposed to be at the same time.” They also tend to be present in large numbers in RA patients’ cells.

The research also revealed that the molecules that promote inflammation in joints also influence the damage that can occur in blood vessels, and that the onset of an autoimmune disease can, thereby, dramatically accelerate vascular disease.

Turning to the rational choice of future research targets, Professor McInnes observed that after the success of TNF blockade, it has turned out that these immune-targeting antibodies can be used in a number of inflammatory diseases. There has been considerable success, for example, in one of his areas of interest, psoriatic arthritis.

He added that we now know from therapeutics that we can separate different diseases on a molecular basis. This is a transformative understanding. Knowing disease at a molecular level enables us to develop medicines to treat them at a molecular level. Professor McInnes said: “‘What do I have doctor?’ What I would say with my “great clinical expertise” is that you must have inflammatory bowel disease, or rheumatoid arthritis or psoriatic arthritis – delete as appropriate. What I would much rather say is you have molecular diagnosis A, B or C and this will predispose you to effective therapeutics D, E or F.”

Professor McInnes then described some promising initiatives. The first was GLAZgo Discovery, which brings together Glasgow academics with drug company AstraZeneca to exchange knowledge which, it is hoped, will yield new products “very soon indeed”.

The second advance which, Professor McInnes said, is the start of his “next best guess at the future” was the formation of the Rheumatoid Arthritis Centre of Excellence, funded by Arthritis Research UK. This aims to understand the fundamental immunological error that causes the immune system to attack human joints. With this comes the prospect of identifying patients far earlier and the possibility of preventing, rather than treating, RA.

The Centre has a systems-based approach, with a working model based on looking at the way that groups of inflammatory proteins work together.

A third area of progress is in personalised medicine, and the possibility of being able to treat diseases according to their molecular sub-type. This has the advantages of being more effective and also highly attractive to funders.

Professor McInnes gave examples of the progress being made, such as comparing two approaches to early-stage RA. One involves giving a TNF blocker the other a B cell-depleting molecule. The strategies had similar results, but the latter could save £2,000 – £3,000 per patient. A personalised medicine approach was then taken to see what was most appropriate for which patients – and the variants turned out to be a straightforward matter of age and gender, combined with some genetic determinants.

Finally, Professor McInnes spoke about Scottish early rheumatoid arthritis (SERA), which he described as “a remarkable effort – this is what Scottish biomedicine is really all about”. Samples are gathered from all Scottish RA patients and the CHI record system allows them to be followed for life. Smaller, intensive studies have also been carried out to gather vital immunological profiling.

Bringing all the datasets together can produce very exciting results. For example, it has been identified that there is an immunological set point that says whether a person is likely to get RA, and then whether they will respond to a given treatment. What has been created is the equivalent of a genetic ordnance survey map, which has been used to look at who will respond to what drugs. It turns out that as few as five genes can determine whether or not methotrexate (one of the main drugs used to treat RA) will be effective.

The overall result is that by using different varieties of cellular and molecular approaches, the clinician, informatician and pharmaceutical company can be brought together. In conclusion, Professor McInnes said that the advances taking place are so far reaching that the world of rheumatology is starting to “dream big” and starting to think in terms of cures rather than just therapies.

The Professor was asked if genetic testing for babies’ chances of getting RA might mean some people have lifelong preventative treatment for a disease they would not get. He said it is unlikely that a genetic signal on its own would warrant treatment, but that it, and other clues such as family history, might bring options for screening and early detection. In addition, he looks forward to the prospect that vaccination may one day be possible.

On the issue of how to identify the impact of genetics, environment and lifestyle on RA, Professor McInnes responded that it’s essential to study a large and diverse enough sample of people, and also have good control groups. The epidemiology is now good, he added, so risk factors such as smoking have been clearly identified. He said it is also likely that socio-economic factors are very important. 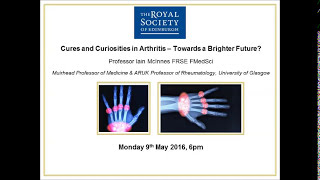