Delivering the first Beltane Prize Lecture for Public Engagement, renowned zoologist, author and broadcaster Aubrey Manning spoke of the beauty and elegance of science and said that it was very much part of culture – like a poem or a piece of music. What’s more, science and scientists gain from engaging with the public – and society benefits too.

The practice of science in all its diversity is a human activity and, for all that its nature demands a certain approach, its procedures and achievements involve all aspects of our humanity – the emotions and feelings as well as the intellect. It is part of our culture.

Delivering the first Beltane Prize Lecture for Public Engagement, renowned zoologist, author and broadcaster Aubrey Manning spoke of the beauty and elegance of science, and said that it was very much part of culture – like a poem, or a piece of music. What’s more, he said, science and scientists gain from engaging with the public – and society benefits too.

At the birth of the Scottish Parliament, when policy makers were debating a national cultural strategy, all sorts of things were mentioned. Performing and the visual arts, design, film, architecture and broadcasting were on the list, but there was one striking omission – science. “I went through their glossy booklet and there wasn’t a single occurrence of ‘science’”, he said. “I thought that was pretty dreadful.”

Science is a part of culture, he said, and should be regarded as such. The work of scientists can be truly creative and involve the emotions as well as the intellect. Scientists themselves have a responsibility to engage with the public and to express what it feels like to do science, as a process, not just showing what has been discovered. In this way they can promote a better general understanding of what science is and means.

Not that the public isn’t interested in science. His own field – animal behaviour – is an attractive subject from the “nursery to the University of the Third Age”. But while it’s beautiful and often fun, it can mislead. People may often think they understand and empathise with animal behaviour – and to an extent they may – but there are risks in making judgments on superficial appearance, when in reality the situation is more complex. It means that animal behaviour can illustrate well the scientific approach to the natural world…

Public engagement can be enjoyable for scientists, and the public require more joined up science than they are given credit for, he said. It’s now seen as a good thing for scientists to communicate what they are doing, but this wasn’t always the case. One of the pioneers in public engagement was Magnus Pyke, who became such a celebrity that in the 1970s, if people were asked to name scientists they knew, then Newton, Einstein and Magnus Pyke were the top three! Frequently on television, he had a distinguished scientific background, yet was attacked by fellow scientists for apparently demeaning his subject and dumbing it down. “He was a very nice man, with a love of science and explaining it,” said Professor Manning. It was the likes of Pyke and David Bellamy who made science popular by bringing out the beauty of the subject and of the natural world.

Professor Manning described his “good fortune” to be picked up by the BBC to present Earth Story, the 1998 series which was essentially a voyage of discovery to find out what our planet is actually like. It was a wonderful experience, he said, being out in the field with earth scientists and seeing the world through their eyes. He talked in particular of the formation of particular mud pool rock patterns in Southern Africa as giving clues to where life might have started. “Science was exploring a kind of beauty equivalent to a poem or a piece of music.”

It’s important to promote the creative side of science, but the impression exists that scientists are different kinds of people. He quoted Jacob Bronowski, who said: “I grew up to be indifferent to the distinction between literature and science, which in my terms were simply two languages for experience which I learned together.” The division persists, and is encouraged in schools, where still children essentially choose between art and science at the age of 12 or 13. This perpetuates the idea of the “nerdy” scientists as opposed to the “free-spirited” students of the arts.

Part of the problem is that the media and science work in different ways. While scientists work with the idea of probability – with theories based on evidence and with shades of grey – the media wants to know the answers; and it wants those answers to be black and white, with no room for uncertainty. “The idea of probability is difficult for the media.”

Professor Manning believes, however, that engagement with science helps people to become better judges – and to recognise the difference between opinion based on evidence, and belief. Opinions may elide into belief, he said, which can make it very difficult for a scientist whose work flies in the face of convention, or what has previously been thought to be a scientific “truth”. He cited the case of former Edinburgh University biochemist Peter Mitchell, whose chemiosmotic hypothesis (relating to energy transfer in cells) won him the Nobel Prize for Chemistry. The hypothesis was at first considered to be heretical, but gradually grew to be accepted by most British scientists. There remained one group working in Kings College London which still dissented. Mitchell and his colleague, Jennifer Moyle, had invited the lead KCL dissenter to their laboratory in Cornwall and, working together, thought they had convinced her – but when she returned to London she continued to ignore the theory. “But there, scientists aren’t the most rational people,” Mitchell had concluded.

The idea of the scientist as the cool, collected creature without human feelings couldn’t be further from the truth, with jealousies and competition a common part of the game. As Francis Crick said, when commenting on a 1987 BBC film Life Story, “The film gets over the obvious fact that scientific research is performed by human beings, with no trace of the stereotyped emotionless scientist.” Indeed, when DNA pioneer Crick and his colleague Watson heard that their US rival Linus Pauling had taken a route they were sure was wrong, they celebrated. Incidentally, when Crick and Watson showed their model of the double helix to X-ray crystallographer Rosalind Franklin, her reaction was that it had to be right as it was so “beautiful”.

Professor Manning believes – along with Magnus Pyke – that all science can be communicated so that the public has some understanding of what’s happening, however much they might be standing at the edge. He freely admits that when it comes to mathematics he is no expert, but that doesn’t prevent his being fascinated with the subject. “Mathematics is a beautiful landscape – viewing it from the edge, it looks beautiful to me,” he said, adding that he loves reading about it and the “extraordinary human beings” involved.

He concluded by telling a little of the story of Fermat’s Last Theorem – perhaps more accurately called ‘Fermat’s Conjecture’ – and the struggle of Andrew Wiles to find a proof. He described Wiles’ eureka moment when, sitting at his desk he recalls a sudden “incredible revelation”. “It was so indescribably beautiful; it was so simple and elegant.”

The struggles and the journey of the mathematician show that you don’t have to banish emotion to do science – and that it can be a beautiful and elegant process. The scientist has a similar function to the artist: he or she shows us the world – and our place in it – in a way that we haven’t seen before. “At the bottom of most of our problems is that we don’t see ourselves properly in the world around us,” he said. And it doesn’t take an expert to understand. Again quoting Bronowski, he added; “To me, being an intellectual doesn’t mean knowing about intellectual issues; it means taking pleasure in them.” Communicating that pleasure is an essential part of engaging with the public.

Questions covered issues including the beauties and dangers of science; what happens when a previously-accepted theory is challenged; sources of information – including the media, for good or ill; and the problems faced by today’s polymath.

On that last point, Professor Manning said that the polymath, or general scholar, has a “huge task” now because there is so much to know. He was responding to a questioner who had studied “Natural Philosophy” – now usually called Physics – at the University of Glasgow some decades ago, and who felt the subject had lost touch with the wider cultural world, along with the name change.

Asked “Was Einstein to blame because he left the philosophers behind because they didn’t understand his mathematics?”, Professor Manning said that was a bit hard on Einstein – because what else could he have done? He accepted, however, that advanced mathematics could be difficult for the lay person to grasp, but maintained that it could be explained sufficiently so that people could understand an issue or discovery.

Asked how to muster support for those working in controversial areas of scientific research, such as stem cell technology, Professor Manning said that animosity could be the result of deeply-held beliefs, including religious belief. “Science can’t deal with belief, but it can show you how to separate opinion, based on evidence, from belief.” he said. “We need to defend good science. We have to keep banging away at it and show that science can be liberating.”

He was cheered by a teacher from St Andrews, who said that schools were already doing good work in teaching pupils about the connections between science and the humanities, and promoting the value of science as part of culture.

But he also accepted the point put by another audience member that some kinds of science can be something of a Pandora’s Box – and we might not always be happy with the results.

Asking whether certain forms of science could be “menacing”, Professor Manning said he was concerned about eugenics; although on another controversial topic – nuclear power – he said he had changed his earlier view, when he had campaigned strongly against it, and was now in favour as an essential component to carry us through a period of energy shortage.

Asked about sources of information about science, and the role of the internet and the media, Professor Manning said that the media want “black and white” answers – with no room for uncertainty or shades of grey. He believes, however, that knowing about science and philosophy makes one a better judge. There is polarisation in all fields, he added, citing the current battle in economics between those who want to spend now, and those who want to cut in order to reduce debt.

He is not convinced that science is “too difficult” for the general public, he said; indeed, he believes it’s possible to get the public involved in policy involving science – for example, what it would be best to do to deal with the threat of foot and mouth disease and how to proceed with stem cell research. 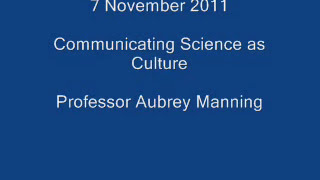