Home » Resources » Video » “He that all our comford Was?” Robert The Bruce in Scottish sources before Barbour’s Bruce

“He that all our comford Was?” Robert The Bruce in Scottish sources before Barbour’s Bruce

The image of Robert the Bruce as hero king, and the Battle of Bannockburn (1314) as the most glorious feat of the Wars of Independence, can be traced back to Barbour’s Bruce (John Barbour, The Brus, 1375/6). This fascinating ‘in conversation’ talk examines Scottish sources prior to Barbour, to see what Bruce’s reputation was in Scotland before the poet represented him definitively as the heroic liberator. It will reveal that the early Scottish sources were significantly ambivalent about Bruce, and even about the importance of Bannockburn as late as the 1360s. 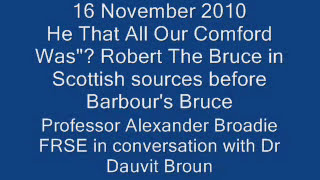