Home » Resources » Video » Burns: A fiddler and a poet

Burns: A fiddler and a poet

This illustrated talk introduces a little known Robert Burns. For over 200 years, he has been misrepresented as Scotland’s national ‘poet’, yet he was, pre-eminently, a song-writer. The lecture considers Burns’ background as a fiddler and folk artist; his innovative use of traditional dance/instrumental forms (strathspeys, reels, jigs, slip jigs, hornpipes); his curious method of composition – most often, from the tune to the words; his seminal theory of ‘ballad simplicity’ which relates to musical form, language, rhythm; most significantly, his reinvention of himself and of a new Scottish national tradition.

Burns: A Fiddler and a Poet Q&A

Nonsense lyrics, or some of the most profound words ever written by Robert Burns? Professor Freeman posed the question to his audience at the start of a lecture designed to redefine the Bard’s contribution to Scottish and global culture. From the song O Cam Ye Here The Fecht Tae Shun, the words conjure up the chaos of a Jacobite battle at Sheriffmuir, Professor Freeman explained, but, looking beyond that, the musical form is a reel.

A reel is “unremitting, breathless tension,” he said. A reel doesn’t stop and gives a “cinematic impression” of the scene wholly integral to the meaning of the song. It represents the “language of music” in which the musical form is the message. Which all goes to show that for Burns the music came first, Professor Freeman argued. Contrary to perception, he was a fiddler first and a poet second and, as such, completely in tune with the people and the countryside around him.

His type was identified by Friedrich von Schiller, a German philosopher and contemporary of Burns, who, writing in 1795, distinguished between two types of poet – those who are not conscious of any rift between themselves and their milieu and those who are self-conscious. The former use what they see directly and seek to articulate it for its own sake.

Burns was in no doubt about his own identity. When he wrote, in April 1791, to Charles Sharpe, in Dumfries, he described himself as a fiddler and a poet, not a poet and a fiddler. In taking the work of fiddlers and making the words fit the tunes, he was von Schiller’s direct artist in practice. Unlike Schubert, who wrote tunes to Goethe’s words, with Burns it was always the music first.

In modern parlance, Professor Freeman said, Burns is a “folkie”, constantly “on the scrounge” for tunes as he moved around the country with a wallet full of ballads and his fiddle case. Arguably, he is the founding father of modern folk music, doing everything a “folkie” now does. He adapted the songs of his friends, baroque music, international folk melodies and, most importantly, traditional instrumental tunes – pipe tunes – and turned them into his own work.

That the music came first was apparent when he argued with George Thomson, his second editor, after Thomson had brought in several noted classical composers to orchestrate Burns’ songs. The composers expected to be dealing with a mere poet but found themselves up against a fiddler who constantly tried to get them to listen to Scots fiddle music to get a better idea of his country’s musical tradition.

Burns believed, for example, that classical composers did not understand Strathspeys, with their stealing of the beat and their spacing between notes. Eminent composers of the day, in the way they interpreted Strathspeys, lost the form of the dance and the sense of direct expression that Schiller was talking about, Professor Freeman said. Worse yet, one Czech composer, Leopold Kozeluh, called Scottish music the “music of barbarians.” Burns and his colleagues did not take that lying down. James Beattie and William Tytler, writing in the Scots Musical Museum, strongly denounced the “warbling” and “the smothering of words” by classical composers, putting them at the centre of a major 18th-Century debate about articulation and style that is still with us today.

Two pieces of music illustrate this point, Professor Freeman said. The first is a baroque performance of Pachelbel’s Canon by a “great” conductor and orchestra. However, Burns would have described it as “schmaltzy and prettified.” The other is in a clear 18th-Century semi-staccato form by a “half-baked orchestra and a conductor with no reputation at the time.” But he certainly knew his 18th-Century music, Professor Freeman contended. “Each note speaks. He knew what he was doing.” It can be compared to 18th-Century Edinburgh architecture, with each piece balanced and symmetrical.

Burns had a second complaint about the classical movement, summed up neatly by Leopold Mozart, who had similar reservations. He said there were some players who “tremble at every note as if they had a fever.” It muddied the melodic line. This sentiment was shared by Glenn Gould, one of the greatest exponents of Bach’s music who stopped using the sustain pedal on the piano because it smeared the melodic line. He developed a lighter, semi-staccato articulation that replicated 18th-Century music, said Professor Freeman.

There was a third complaint too, but it wasn’t technical, it was social. Burns was a fiddler working in an oral tradition. He worked within a rural community with no distance between himself and his community. He spoke Scots with the same voice as the people he described in his songs.

Take the reel Duncan Grey about a “wild lassie who has a bairn out of wedlock” and is unrepentant, Professor Freeman said. Burns described the song as a “light horse gallop of a reel” reflecting the rising randiness of the girl in a world of strict Kirk repression and taboos. It has the wit and satirical thrust of his community. But Beethoven’s smooth interpretation of the song is intended to have aristocrats laughing at stage peasants. The “rolling breathless tension” and empathy with working class people contained in the Burns version is missing. One reason may be that the classical composers of the day were pandering to their middle-class paying audience, whereas Burns was not paid “a halfpenny” for his songs.

The problem is that Scots reels cannot be translated into German or Italian opera form without losing the form and the humour that was so important to Burn’s work. Voltaire understood this when talking about national cultures, saying that every culture should have an “irreplaceable genius” who should be preserved as unique. It was this notion that went some way towards Burns emerging as an international artist, or, in his own terms, a “Roving Boy.”

Burns the fiddler would rove up and down the country collecting songs from the multiplicity of the Scots tradition, Professor Freeman explained. He drew from his father’s northeast roots, as well as, unusually for an Ayrshireman, from Gaelic melodies. He used Irish tunes and pinched songs from the French, Flemish and Russian sailors he encountered in harbours along the coast. He mixed with Italian immigrants who, in those days, did not run restaurants but were musicians and composers.

What counted for Burns was not the source of the music but its form, whether it was a Strathspey, a jig or a double hornpipe. Some of his songs, such as My Wife’s A Wanton Wee Thing, have repeated lines. Thomson, his editor, said he didn’t like it, it wasn’t very good poetry. Burns took him to task, saying that he didn’t know the difference between a song in which the words were designed to fit music, and a poem. “For Burns”, Professor Freeman said, “the tune always came first”.

Burns understood the “language of music”, Professor Freeman said, but he also grasped the “music of language.” He used language as sound and rhythm, almost as 18th-Century versions of modern rap. To Burns, the voice was an instrument. For example, his widespread use of alliteration, inherited from the Scots medieval Makars, may not look great on the printed page, but that is not the point. “It’s the music of the language that is important,” Professor Freeman said. “What’s important is the sound of the words, not the words themselves.”

Professor Freeman concluded, perhaps fittingly, with his interpretation of Auld Lang Syne, a song about two friends, pints in hand, reminiscing about times past. Burns, he said, uses all the tools of his trade to create a masterpiece about not only universal brotherhood but also what the Scots version of brotherhood is. It has rhythmic repetition, stop lines and an almost religious, hypnotic chant, which gives it a biblical quality. There’s also a deliberate mix of forms of language – King James Bible, Scots dialects and ancient English, which all give a sense of times past. The song is quintessentially Scottish but, because of Burn’s use of all these language forms, everyone can embrace it. That is probably why Auld Lang Syne is popular around the world and underlines once again that Burns was a fiddler – and a poet.

Do we tend to overlook the importance of Burns in preserving the Scots language?

He did preserve a great deal of spoken Scots language. But he was a poet and so he was creative in terms of the language of poetry. There is a great deal of Scots in songs such as O Ken Ye Whit Meg O The Mill Has Gotten. But as well as Scots, he also helped to preserve dialects, such as the dialect of the northeast where his father was from.

Was My Luve’s like a Red, Red Rose a collected song?

It may have been. He was a collector, but then he added his creativity to make them the songs they became.

You have revealed a side of Burns that is not well known. Did he translate songs directly from Italian?

He had a smattering of Italian as part of his immense background. He was quite capable of doing this.

Is the music of Burns a good way of getting young people interested in his works?

I have not seen a child who doesn’t respond to the music instantaneously. There is great interest, mostly because it is so accessible. His music should not just be confined to Burns Night. He’s a man for all seasons. 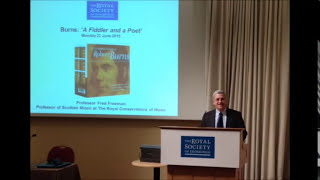 Women in Science in Scotland Exhibition lands at Edinburgh Airport
The changing nature of research environments
RSE Research Awards made to 48 researchers whose work will benefit individuals, communities, and broader society.
Manage Cookie Consent
We use cookies to optimise our website and our service.
Manage options Manage services Manage vendors Read more about these purposes
Preferences
{title} {title} {title}