Home » Resources » Video » Bridging the gap between vision and experience

Bridging the gap between vision and experience

Dr Michel Virlogeux is the leading project consultant responsible for the construction of the iconic Normandy Bridge, and the Millau Viaduct. Dr Virlogeux has designed over 100 of his native France’s most beloved bridges, including the Ottmarsheim Bridge over the Alsace Canal, the Moulin Sur Escaut rail bridge and the Seyssel cable-stayed bridge over the river Rhone. In this year’s annual joint lecture, Dr Virlogeux looks back on the architecture and aesthetics of some of his projects, as well as predicting the direction of future designs and construction methods.

Bridging the gap between vision and experience Q&A

The art and the science of bridges

As the engineer responsible for some of the world’s most iconic modern bridges, Dr Michel Virlogeux described the philosophy behind his approach to design and shared the inside story of some of his most challenging and best-known projects…

When you have designed and constructed the world’s longest stay-cabled bridge, apparently defied the rules of geometry and been hailed as “the modern Brunel,” what next? And for Dr Michel Virlogeux, the answer is to build the most important new bridge in the world – the Third Bosphorous Bridge, north of Istanbul.

Complete with two railway lines and eight lanes of highway, running side-by-side on top of the deck, and a clearance span of 1,408 metres, the new bridge is due for completion next year and will not only cross the Bosphorous but also help “Europe’s biggest city” expand north towards the Black Sea, and relieve its increasing congestion.

The challenge for the two designers – Virlogeux and Jean-François Klein – was to design a “suspension bridge” which echoed the appearance of the first two bridges over the Bosphorous, at the same time as carrying much more traffic. For Virlogeux, the bridge must be an elegant design as well as functional, carrying all traffic on the same level, unlike other bridges where the railway runs under the road. And this would mean reducing the depth of the span from about 15 metres to only 5.35 metres.

A suspension bridge with similar dimensions would not be able to carry such a huge train load, but Virlogeux’s solution was to add stay or “stiffening” cables for extra support, such as the Brooklyn Bridge and several other 19th-Century examples, which combine stays and suspension cables.

This impressive structure is the latest in a series of projects for which Virlogeux has won global attention, including the Millau Viaduct which spans the valley of the River Tarn in southern France. Virlogeux was the structural engineer for the project and Norman Foster (Lord Foster of Thames Bank) was the architect, and between them they constructed “the world’s tallest bridge” – the top of one mast is 343 metres above the base, higher than the Eiffel Tower. Built at a cost of about €400 million, with a total length of 2,500 metres, it was opened in December 2004, and is also the 12th highest bridge in the world, with the road deck 270 metres above the ground.

At the design stage, the most logical solution, said Virlogeux, was to have a series of smaller spans, with a central span 450 metres across. But he was not content with logic alone and came up with the idea of six stay-cabled bridges, all in a line. He described this design as “giving the impression of great quietness.”

Then, the design hit a problem. Usually, with stay-cabled bridges, you use back stays to anchor the masts, but Virlogeux’s design had a series of stay-cabled towers without any back stays. The solution, he explained, was to split the upper section of the pier in two – like a tuning fork sitting on the base of the pier. This would enable the tension between the spans to produce the rigidity and flexibility needed.

Construction was also a challenge, said Virlogeux. A mobile factory was built on site, and temporary piers were used to give extra support during the “launching” of the prefabricated sections of deck – steel boxframes which eventually met in the middle. Allowances had to be made in case there was a storm, with a mean wind speed limit of 37 kilometres per hour at the meteorological station. But according to Virlogeux, the launch was only stopped during one launching operation due to an unexpected summer storm.

Another major Virlogeux project was the Normandy Bridge, which he worked on from 1986 until it opened in 1995 – at that time the world’s longest stay-cabled bridge, with a total length of 2,143 metres and a central span of 856 metres. “Everyone was anxious about the length of the span,” said Virlogeux, but the “association of concrete and steel” made the design very strong, with anchorage foundations 54 metres deep. One of the most interesting aspects of the construction, he said, was the sliding system developed by the contractor to launch the approach spans horizontally, using a system of trapezoidal sliding bearings and vertical jacks controlled by sensors and a central computer. Before the final joining in the middle, the contractors also did a mock-up assembly “to be able to exactly reproduce the fabrication geometry.”

Virlogeux faced a very different engineering challenge when he designed the Jacques Chaban-Delmas Bridge, a vertical-lift bridge over the River Garonne in Bordeaux, which opened in March 2013. The challenge here was to enable river traffic such as cruise ships to enter the recently recovered harbour, at the same time as providing an alternative crossing to the bridge built by Napoleon. From a technical point of view, the challenge was to build four towers strong enough to lift the central span (110 metres long), allowing river traffic to pass through the gap, and strong enough to withstand high winds, but light and elegant enough to please the eye. And by adjusting the counterweights used in the lifting mechanism, the design team was able to achieve all these aims. Virlogeux also showed how parts of the bridge, such as the main caisson and the structures used to prevent damage from collisions, were prefabricated nearby and towed by tugs to the site.

One of the most fascinating challenges for Virlogeux was the Terenez Bridge over the River Aulne, connecting Brittany with the Crozon peninsula. This cable-stayed design was the solution to a problem – the old bridge stood at right angles to the roads on both sides and Virlogeux set out to make the bridge curved, to improve the driving experience and make the crossing smoother. But how could cable stays support a curved design? “We started with a tower with two legs framing the deck and my big mistake was to consider only the deck and pylon above,” said Virlogeux.

“I hate computations,” he explained, “but a young engineer who was working with us on the project did calculations which showed that we had a big problem – enormous bending forces in the pier leg below, inside the curve.” Making this leg vertical would counteract the effect but Virlogeux thought it would be ugly. Another idea was to add a third leg, forming an inverted ‘V’ with the leg inside the curve. And after many months of research, the team came up with the solution, “slightly inclining the column inside the curve, and removing the leg on the outside.” And the result was one of Virlogeux’s most elegant designs.

As well as showing off his proudest achievements, Virlogeux also admitted to several errors. Apart from the original design of the Terenez Bridge, he also made a mistake with the Chateaubriand Bridge in Brittany, when he miscalculated how high the river would rise

during the course of the day, resulting in the arches of the bridge being submerged during the daytime. This mistake, he explained, was partly caused by rushing to finish the job, under pressure.

Virlogeux also set out his design rules: the need to balance utility, strength and durability, at the same time as creating something elegant. The design should be slender but not look too spindly, adapt to its location and “express the flow of forces.” It can be complex but should not have gratuitous features – decorations for their own sake. With pedestrian bridges, he added, the details are also important because people see them close up.

During the Q&A session which followed, Virlogeux also added that no matter how good a design you may have in your mind, you need a client with the same vision: “You can’t design an elegant bridge for a client who doesn’t want an elegant bridge.”

How do you balance the demands of art and science/engineering?

Why are the French so good at this form of design?

Nowadays, we work in many places, as part of multinational teams. You should not design for show but quality. You can’t design an elegant bridge for a client who doesn’t want an elegant bridge. In the US, money determines design. They have great buildings (which are privately owned) but not great modern bridges (which are publicly funded).

We have many bridges thousands of years old, so how long will yours last?

Officially, 100 years is the usual target, but the Millau Viaduct is designed to last 125 years. Fatigue and loads affect this, also maintenance.

How do you avoid rusting in cables?

With cable-stayed bridges, the technology guarantees a long lifetime. The single weak point is the anchorage. The problem is suspension bridges and humidity higher than 50 per cent. New techniques developed in Japan have been successful in dehumidifying cables, but this is not always necessary – the Brooklyn Bridge still has its original cables.

How do you train engineers to scale up from the drawing board to such massive projects?

Experience! Most big projects, however, have very large teams – e.g. 50–60 engineers are working on the Third Bosphorous Bridge. The project manager for the Normandy Bridge recognised this when he built a garden to explain to the public how the bridge was constructed and included the names – more than one thousand – of all the people who had worked on the project. 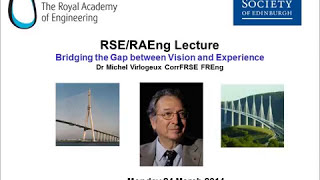