Multidisciplinary research has developed the field of Nanoscience and Nanotechnology. Molecules that “do things” are now being made. New experimental approaches focused on how atoms cluster together have led to the production of novel nanostructures and a general refocusing of research interests on controlling the self-assembly process. Fascinating fundamental insights into formation mechanisms have been revealed and nanoscale devices, which parallel devices in standard engineering, are now being created. On the horizon are possible applications ranging from civil engineering to advanced molecular electronics. Supercomputers in our pockets (as well as our heads) and buildings which can easily withstand powerful hurricanes and earthquakes may be possible.

Sir Harry Kroto was a co-winner of the Nobel Prize in Chemistry in 1996 for his role in the discovery of the “Buckyball” – the molecule that has become the icon of what we now call “nanotechnology”. Refusing to rest on his laurels, however, Sir Harry has been heavily involved for more than a decade in creating platforms for scientists to communicate on TV and the Internet. Some years ago he set up the Vega Science Trust which makes science programmes for TV and the Internet and now he is focusing on Global Educational Outreach (GEO) – an Internet-based education initiative to persuade the world that knowledge of science engineering and maths is vital for our survival through the 21st century.

Sir Harry Kroto was a co-winner of the Nobel Prize in Chemistry in 1996 for his role in the discovery of the “Buckyball” – the molecule that has become the icon of what we now call “nanotechnology”. Refusing to rest on his laurels, however, Sir Harry has been heavily involved for more than a decade in creating platforms for scientists to communicate on TV and the Internet. Some years ago he set up the Vega Science Trust which makes science programmes for TV and the Internet and now he is focusing on Global Educational Outreach (GEO) – an Internet-based education initiative to persuade the world that knowledge of science engineering and maths is vital for our survival through the 21st century.

Being told that Scotland is “the greatest wee country on earth” should have made Sir Harry Kroto feel very welcome. After all, Sir Harry has done more than most to explore the “small, small world” of nanotechnology.

In fact, to give his audience an idea of the scale of his discovery, he explained that a Buckyball is so small that when you compare it to the size of a football, it’s as small as the football compared to the Earth – or, if you prefer, 100 million times smaller than a football.

The Buckyball’s official name is Buckminsterfullerene, because of its resemblance to the geodesic dome, designed by the American architect Buckminster Fuller. It is a molecule composed of 60 carbon atoms, elegantly clustered into a network with the same pattern as that of a modern-day football. This symmetrical structure makes it the most robust molecule of all. Its elongated cousins, the Zeppelin-shaped nanotubes, are equally exciting, according to Sir Harry, because they offer the potential to create a material about six times lighter and 100 times stronger than steel. If we can solve the technical problem of mass-producing this material, it would revolutionise engineering, because it would be ideal as a building material, for everything from super-light aircraft and cars to ultra-strong bridges and skyscrapers. In addition, these materials promise major applications in nanoscale electronics and could revolutionise computing by enabling the creation of highly intelligent, incredibly compact devices. The molecules also appear to have enormous potential as delivery vehicles for therapeutic drugs, travelling essentially non-invasively into the body to release their cargo only when they arrive at their target, rather than the “scatter-gun” approach of most medical treatments.

So, where did the Buckyball come from? How many are out there? And how do you “make” one?

The simple answer is that they are everywhere, created by explosions in the atmosphere – for example, when lightning strikes carbon, or even in the flames of Bunsen burners. And scientists can simulate this natural process to create them in the lab, to self assemble into sheets, wires and tubular forms.

In 1985, Sir Harry and his colleagues were the first people ever to “see” C60 when they zapped a small piece of graphite with a laser. When they analysed the ablated material using a mass spectrometer, they discovered – to their (and everyone else’s) complete surprise that a highly stable special species consisting of 60 carbon atoms had formed spontaneously. At first, many scientists didn’t believe them and several papers were published disputing their contention. In 1990, however, the Buckyball structure was confirmed as correct and it was hailed in 1991 as “Molecule of the Year” by Science magazine. Five years later, Sir Harry, Robert Curl and Richard Smalley were jointly awarded the ultimate prize.

Sir Harry in his lecture explained how his journey had started – playing with Meccano as a boy, learning how to manipulate different components. He also described his search for beautiful patterns in nature, and how he and his colleagues scanned the heavens by radioastronomy and became fascinated by the radio waves emitted by carbon molecules that were subsequently found to be present in the rapidly expanding envelopes of red giant stars. Then, as if he turned a telescope the other way round, he embarked on his quest for the atomic-scale constituents of carbon plasmas in the laboratory – a quest that would eventually lead to the discovery of C60.

The Buckyball has since become an icon of the new field of nanotechnology. After the excitement of the initial discovery, other scientists began to think up wacky applications as well as equally wacky but also very scary military uses, leading to what Sir Harry describes as “irrational and ignorant attacks” on all aspects of nanotechnology. According to our own Prince Charles and other public figures, self-replicating nanobots would turn the world into “grey goo”. However, as time evolves, more mundane applications of nanotechnology are appearing, such as suntan lotions, tennis racquets, bowling balls and self-cleaning toilets, and these now tend to grab the headlines rather than nebulous doomsday scenarios.

According to Sir Harry, who helped to kick off the debate, nanotechnology could actually play a key role in saving the planet, thanks to the development of new materials such as “molecular motors” running on protons rather than electrons, as well as more efficient solar cells using C60 as a “dopant” or “doping agent”. “The big issue is sustainability,” said Sir Harry, “and we will need much more sustainable technologies in future, with nanotechnology making a big contribution.” According to Sir Harry, this may mean having the nanotechnological equivalent of dung beetles, to recycle our discarded technologies.

As well as saving energy and helping to save the planet, nanotechnology would have many other practical uses, said Sir Harry. Bundles of nanotubes would be stronger than any material ever created, partly because they would not have the same kind of defects that limit the tensile strengths of all other materials – e.g. unlike wood that easily splits in two after you saw half-way through, a defect in one nanotube does not “pass on” any fracture to neighbouring tubes. Nanowires would also make it possible to create new types of zero-loss conductors, while other nano-materials would act as super shock absorbers, helping buildings survive during earthquakes or storms. At the opposite end of the scale, nanotechnology could also be used in genetic engineering.

Yet despite these science-fiction-like predictions, Sir Harry explained, nanotechnology is as old as life itself – for example, haemoglobin, the “molecular motors” which travel around in our bodies, delivering oxygen to muscles, etc. “We haven’t even started thinking about the dynamics of nanotechnology,” he declared. “Nanotechnology is 21st -century chemistry, and we need a fundamental understanding of chemistry, because the most exciting areas of physics, engineering and biology are those which overlap with chemistry.”

As he switched the focus onto education, Sir Harry discussed one of the great contradictions of modern life. On the one hand, he said, one of the greatest barriers to the development of young scientists is high technology – unlike the young Sir Harry, taking things apart to find out how they worked, young people today have electronic devices which hide all their secrets. Despite being alienated from science, however, today’s students now have much easier access to teaching resources, via the Internet – and this is where Sir Harry now devotes much of his time, promoting the Vega Science Trust (www.vega.org.uk), a non-profit-making organisation which broadcasts science programmes free-of -charge over the Internet. Another of his new Internet projects is GEO (Global Educational Outreach) at www.geoset.info, providing downloadable educational material to help science teachers, including recipes for hands-on projects.

“Television is finished,” Sir Harry declared, “as a medium of cultural, educational or intellectual value.” Websites, he believes, will become the new digital classrooms. When asked about the problem of misinformation (particularly in medicine) and the bias towards modern, digitised sources in “google-biased” research, Sir Harry said that he believed “elite” sites would emerge, accredited by leading scientific institutions (like the Royal Society of Edinburgh) to ensure the sources met high and reliable standards.

Sir Harry is also confident that the Internet will facilitate learning by pooling universal resources, with students teaching younger students, like self-replicating nano-tutors. “We are all experts in our own fields,” he said, and the sum of our knowledge is greater than any individual business or political force, no matter how strong it may seem.

“Children need universally accepted truths,” said Sir Harry, and science is the international language which provides it, to counter the culture which holds up Scientologist Tom Cruise as an icon and pokes fun at the scientist, Young Einstein. “We have 10 times too many psychologists and media studies graduates,” he added, “and not enough in chemistry and physics.”

Perhaps, he suggested, we should talk a lot more about the humanity of science – like anaesthetics and penicillin – to inspire our young students. ”Science is different from any other subject,” he said, “and what makes it special is that it can only thrive if question and doubt are actively encouraged.”

But as he talked about “the global outrage which worked against Apartheid,” the humanity of science and the wonders of nanotechnology, Sir Harry brought his audience back down to earth when he said that a quarter of the world’s population still do not have electricity. Nanotechnology may be “the next big thing” but was Sir Harry asking us to be “grateful for small mercies”? 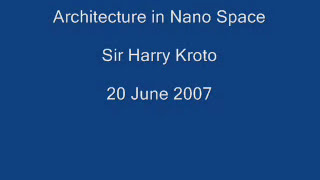