Dame Sally Davies sets out why antimicrobial resistance (AMR) is such a problem now and the challenges that mean there is no easy solution.

Dame Sally Davies is only the 16th recipient of the Lister Medal since it was founded by the Society of Chemical Industry in 1944. Named after Sir Joseph Lister, founder of modern antisepsis, it was first awarded to Sir Alexander Fleming, who discovered penicillin.

Dame Sally Davies is only the 16th recipient of the Lister Medal since it was founded by the Society of Chemical Industry in 1944. Named after Sir Joseph Lister, founder of modern antisepsis, it was first awarded to Sir Alexander Fleming, who discovered penicillin. In a fascinating lecture, Dame Sally discussed the global challenge of antimicrobial resistance (AMR) and pointed a way forward for the future.

In a talk that covered the history of antimicrobial resistance and its current and future threats, Dame Sally issued a powerful call to governments around the world and to health professionals and individuals. “We need to take action now”, she said, “if we want to be able to look our children and grandchildren in the face”.

Ebola was the wake-up call to remind the world that infectious diseases remain a key threat to global health, said Dame Sally. While much of the discourse around public health relates to lifestyle factors – such as smoking, or drinking alcohol – infectious diseases are still with us, and are still deadly.

Fleming’s discovery of penicillin might have transformed our response to infectious diseases, saving many lives that would otherwise have been lost. But even more than half a century ago, Fleming himself recognised that antimicrobial resistance (AMR) was a problem that went hand-in-hand with antimicrobial drugs (AMD). Indeed, accepting the Nobel Prize in 1945, he said that it was not difficult to make microbes resistant to penicillin in the laboratory, and ‘the same has occasionally happened in the body’.

Despite this early recognition of the issue of AMR, the world thought it had ‘cracked’ infection, said Dame Sally, with even threats such as AIDS – once a death sentence, now a chronic condition thanks to retrovirals – diminishing. Perhaps that is why we have disinvested in infection; there is relatively little current research into new antibiotics; pharmaceutical companies having other priorities.

Yet Dame Sally posited that AMR could mean the end of modern medicine as we know it. If we do not have effective antibiotics, then it is goodbye to chemotherapy, to hip replacements, to caesarean sections, to organ donation – all of which rely on effective antibiotics if they are to work. In other words, all these lifesaving miracles of medicine can only do their job if antibiotics are firmly in the picture.

Yet, said Dame Sally grimly, no new class of antibiotics has been discovered for 26 years, even as AMR resistance has grown to be ever more problematic. The issue is complex, she said, and for some humans, the reaction to complexity is to bury one’s head in the sand. Yet there is a real problem; and for the sake of world health, it cannot be ignored.

But while resistance has always been a problem, it is only recently that this has come to be seen as acute. When she trained as a doctor, if a patient was resistant to an antibiotic, you would simply turn to another. Now that is getting harder because sometimes there simply is not another in the cupboard. This is serious, and is resurrecting threats that we thought had been vanquished: gonorrhoea without treatment is an unpleasant disease, she added.

Dame Sally summarised the main challenges and contradictions. These include: conservation, that is, appropriate use of antibiotics in humans and animals; making good use of diagnostics to ensure optimum usage; and sanitation and hygiene. There is also the question of access versus excess. While some countries over-use antibiotics, others do not have access to them. There are issues of training of health professionals and, indeed, the public.

There is a challenge for the scientific community, not only in developing new antibiotics but also in innovation in areas such as vaccination. There are global concerns – diseases are no respecters of borders – and there are economic factors, both in terms of animal husbandry and agriculture, and in the (lack of an) R&D pipeline.

As CMO, she has taken action to tackle the problem of AMR. Having seen the success of looking at the similarly huge issue of climate change through an economic lens, she asked the Prime Minister to ask top economist Jim O’Neill to look at AMR. The final Report was issued in May of this year and it emerged that Lord O’Neill had gone far beyond his initial remit, considering a wide range of issues around the subject. He concluded that AMR was a huge issue; that we need to use AMDs better; that people are not getting the right drugs; and that it is a huge cause of death – ten million deaths annually by 2050, compared to eight million from cancer (worldwide).

We have superb surveillance in this country, said Dame Sally, and we can see the resistance patterns going up. And the news is getting worse. Last year, it emerged that bacteria that resist colistin, one of the last remaining antibiotics ‘of last resort’ have been identified. This has helped bring the scale of the problem home to decision makers across the globe. Even the US is “getting twitched”, and about time too, said Dame Sally.

The solutions are multi-factorial. If we prevent infection, we naturally use fewer antibiotics, she said. We can also look at alternatives, such as the use of phages as antimicrobial agents, and rapid diagnostics, so that we can use antibiotics only where they are actually needed. One of the problems is gaps in surveillance at a worldwide level – which means we do not have a full picture of the magnitude of the problem.

Britain is taking action, she said. The UK Government has set up the Fleming Fund, which has £265 million over five years to tackle AMR on a number of fronts. These include improving capacity in diagnosis data and surveillance of AMR, and supporting the World Health Organization and others to promote national action plans and surveillance of antimicrobial consumption and use. This takes a ‘One Health’ approach, which brings together animal disease, human disease and the environment.

Dame Sally said that there are pockets of positive development across the world. She cited aquaculture in Norway, where antibiotic use has been cut drastically, because each fish is vaccinated. There is a similar system in Scotland, she added. There is, however, a need to keep developing new vaccines. But the same thing is not happening in other countries such as Chile or Vietnam, she said, where fish are in any case, prone to different infections, and require different vaccines.

She spoke a little about how companies could be encouraged to conduct research and development into antibiotics, such as a market entry award. We do not pay enough for antibiotics, so no-one is incentivised to make them as there is no profit to be made, she said. But if companies knew they could recoup their costs and make a profit, this would have a powerful impact on antibiotic R&D. Essentially, a market entry reward would mean paying the company for the development with the agreement that they would not then sell huge numbers of them, hastening resistance. There are a number of incentivisation models that could be considered, she said.

Lord O’Neill is currently ‘travelling the world’ gaining support for his Report, she said, and she has been doing likewise. But we have to get our own house in order too. She cited the UK’s five-year antimicrobial resistance strategy, which runs until 2018. This has the overarching goal of slowing the development and spread of AMR, and focuses on three main areas: improving the knowledge and understanding of AMR; conserving and stewarding the effectiveness of existing treatments; and stimulating the development of new antibiotics, diagnostics and novel therapies.

The UK Government has made specific commitments in response to Lord O’Neill’s Report. These are to reduce healthcare-associated gram-negative bloodstream infections by 50 per cent by 2020, and to set a numerical target for antibiotic use in UK livestock and fish farmed for food (from 62mg/kg to 50mg/kg by 2018).

Dame Sally said that progress is being made, but that more needs to be done. She outlined some positive steps and hopes for the future. So far this year, AMR has been on the table at high-level meetings in Davos, India, Japan and London. Although the G20 rarely discusses health, Angela Merkel has said this is an issue she will take on next year. This issue will be discussed at the United Nations General Assembly Heads of State week in September. “We are moving forward and working really hard, and I think we will get an ambitious plan out of it,” she said.

She believes there is real value in discussing AMR at UNGA, because it signifies high-level political commitment globally, gives momentum to implement a global action plan across all sectors, and means international action and co-ordination where needed to support national action plans. “We have to find solutions together and every bit of the system can make a difference, and needs to,” she said. “A million people a year are dying from drug resistance. Can we stand by and let this get worse, and face our children and grandchildren? I cannot.”

There were questions on topics ranging from whether there is an app to help GPs prescribe appropriately to how to incentivise small companies to undertake research into new antibiotics.

Dame Sally said that she would like to see apps based on NICE or SIGN guidance, but that she would also like to see games for children to improve public education and awareness. She also acknowledged that there should be a mixed model whereby spin-outs are encouraged to work in this area.

Asked about whether humans or farming is a bigger issue, Dame Sally said that we know there are problems in the food chain, but we do not have good data. Nevertheless, sick animals need to be treated, she stressed.

Asked whether old antibiotics should be brought back into use, Dame Sally said that could be one solution, but that you should not lose focus on prevention and stopping inappropriate use. 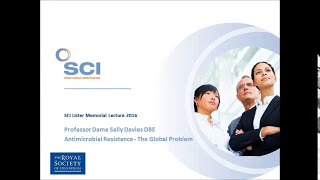