To seek asylum and freedom from persecution is a fundamental human right, enshrined in the Universal Declaration of Human Rights and celebrated as such on World Refugee Day.

The RSE has been heavily engaged in work over the last few years to ensure that those who live and work as scholars, creative artists, entrepreneurs and public figures might be able to find a scholarly home befitting their standing as intellectuals. From the establishment of the partnership with CARA – the Council for At-Risk Academics; to the YAS scheme enabling those without live connections to scholars and Fellows in Scotland to find routes to election and membership. This year Dr Sabir Zazai OBE FRSE was elected Fellow for his work as CEO of the Scottish Refugee Council and President of Cities of Sanctuary.

The RSE has also actively engaged with consultations on international aid and also on the Nationality and Borders Act, drawing together a strong cross section of expertise from across the Fellowship and publishing an advice paper well as a full response to the Home Office consultation.

Speaking at Party Conferences on immigration and asylum has been a regular feature of my own work as well as and being part of expert panel at Curious and a lecture to Fellows this year. As Afghanistan, Ukraine and now Rwanda become household names for huge failures at state levels of peace building, conflict transformation, humanitarian assistance and immigration systems the work of the Royal Society of Edinburgh in opening itself out to a far more diverse membership including many who are experts by experience of the refugee systems is important for the ways in which knowledge might be made useful.

UK Asylum System Proposed Reforms
While the UK Government controls immigration and asylum policy, the Scottish Government and local authorities are responsible for supporting the integration of refugees and asylum seekers in Scottish communities. The proposed reforms will therefore have far-reaching consequences for how refugees and asylum seekers are treated and supported in the devolved nations.
Reforming the UK’s asylum system
This event discusses the UK Government’s plans for reforming the asylum system and what this means for Scotland’s approach.

In 2022-2023 the New Scots Refugee Integration Strategy for Scotland will be renewed and it offers a chance for Fellows to respond to the new challenges offered now that awareness of refugee situations is well and truly raised, and no longer a matter niche scholars like myself. It is a chance for all the domains of New Scots to be thoroughly refreshed according to new evidence and thinking.

At the University of Glasgow we have been conducting a major piece of research, taking stock of all of the research and literature on refugee integration policies and practices in Scotland over the last ten years. This has been undertaken by Dr Dan Fisher, with Savan Qadir, a John Smith Centre Global Leadership Fellow and expert by experience. In addition we have been developing a programme globally – Cultures of Sustainable and Inclusive Peace – which aims to support cultural institutions in The Occupied Palestinian Territories and the Gaza Strip, Zimbabwe, Ghana, Mexico, and Morocco working with women and girls in peace initiatives which can make unliveable situations liveable again.

In our work in the UNESCO Chair for Refugee Integration through Languages and the Arts we see the day to day positive impact of the UK’s decision to sign the 1951 Refugee Convention and to uphold its principles and provisions for those who seek asylum and for those who are granted refugee status. In particular we see the rich ways in which all communities are given the opportunity to grow in diversity and culture interculturally, through the provisions in the New Scots Refugee Integration Strategy

The New Scots Strategy has been fundamentally undermined by the Nationality and borders Act and attempted deportations to Rwanda and the refusal of the UK Government even to allow future return, after asylum claims are processed.

Finally, the cultural work – so often the Cinderella of the academy but the place where light and shade may dapple and show us new angles and ways of seeing – is at the heart of the ways and methodologies used by the UNESCO Chair. It is a key finding of our research methodologies that ensure they are restorative in their implementation not simply extractive of data is critical in the context of integration as a restorative, regenerative and reparative activity. For too long scholars have not questions how science and social science and arts engage with those seek refugee. A Charter for researchers have been developed at the Unveristy of Glasgow under the leadership of Dr Teresa Piacenti to this end.

Hannah Rose Thomas is a PhD UNESCO RILA Scholarship holder working with us using artistic methods which are kind, contemplative and careful, whilst investigating what an ethics of rigour might look like when applied to portrait painting of refugee women. Her work, Tears of Gold, is to be exhibited in the Palace of Westminster and will be opened by Lord Dubbs, sponsored by UNHCR during this week, and to mark world refugee day.

Like the portraits by I.D. Campbell in the RSE, painted of our YAS CARA Fellows, Hannah’s work is tender, it stops you in your tracks, it uses sacred icon painting techniques and muted colours of Ukraine to offer us a way of seeing anew, to return an unsteady gaze. It takes us into new weays of feeling and knowing our thoughts. Of finding a way across distances of experience between us towards a proximity, an intimacy, a way to behold the man, the woman, the child.

A way to refuge for all. 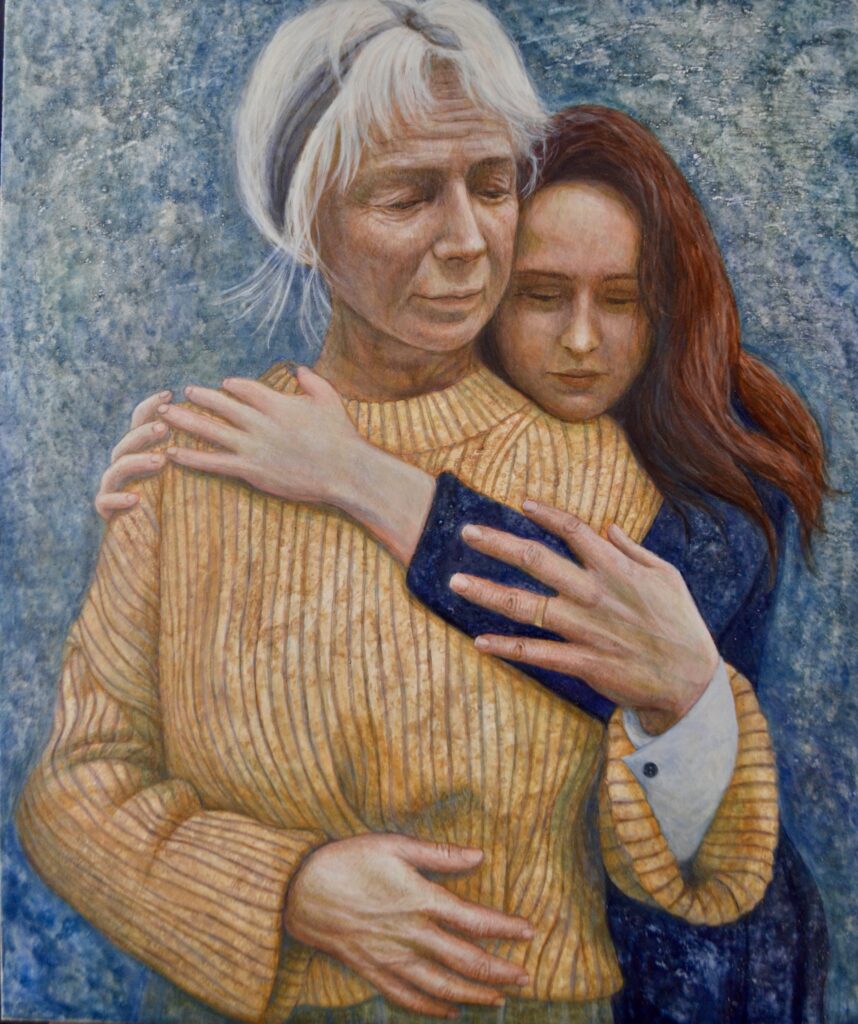