Home » Resources » Blog » Thalidomide 60 years on: a tragic story yet to reach a conclusion

Thalidomide 60 years on: a tragic story yet to reach a conclusion

Thalidomide remains an enigma of a drug. Withdrawn from the market in late November 1961, this year marks 60 years since its removal in response to the birth defects crisis. Yet, its mention still evokes strong memories.

Around the world, thalidomide was used as a sedative and to treat morning sickness in expectant mothers. Tragically, it led to an epidemic of severe birth defects in the late 1950s and early 1960s. The associated damage among infants was shortened long bones in the arms and legs, and, in many cases, other organs and tissues were also affected.

The thalidomide disaster led to a fundamental change in the way drugs and medicines are tested; today, they must undergo more rigorous testing and numerous clinical trials before being approved. However, this is far from the story’s conclusion.

Many survivors of the thalidomide disaster, now in their late fifties and early sixties, suffer from early-onset age-related disorders, alongside their birth defects. Some survivors across the world still campaign for recognition of the damage to their bodies, which they believe stemmed from thalidomide exposure during pregnancy. Some countries, including Australia and Canada, have recently established schemes to try to identify victims.

Since its withdrawal, thalidomide has undergone a renaissance and numerous medical actions have been discovered. It is now used effectively to treat a range of conditions, including cancer due to its ability to prevent blood vessel formation, and leprosy due to its potent ability to downregulate the body’s inflammatory response.

Despite its use in contemporary treatment, the detail of why thalidomide caused wide-ranging damage during pregnancy is still not fully clear.

We do know two things: thalidomide targets and degrades a specific set of genes, and the drug’s ability to prevent blood vessel formation is linked to the birth injuries it can cause. However, precisely how thalidomide caused birth injuries, and the varied effects in each case, is one part of the story not yet clear.

Questions also remain on thalidomide’s overall safety. In Brazil, tragically, a new generation of thalidomide-damaged babies has been identified recently, resulting from patients sharing medicines. However, most other countries using thalidomide have patient safety programmes in place, including the use of contraception and taking regular pregnancy tests.

Despite recent progress, perhaps the safest approach is to remove thalidomide from the market permanently. Such a change rests upon the existence of new non-thalidomide treatments which remain as effective at treating clinical conditions. While seemingly impossible, the scientific community’s recent collaborative effort regarding COVID-19 shows solutions are always achievable with enough support, which may finally deliver an end to the thalidomide story.

Professor Neil Vargesson FRSE is the Chair in Developmental Biology in the School of Medicine, Medical Sciences & Nutrition at the University of Aberdeen.

This article originally appeared in The Scotsman’s Inside Science column on Monday 27 September 2021. 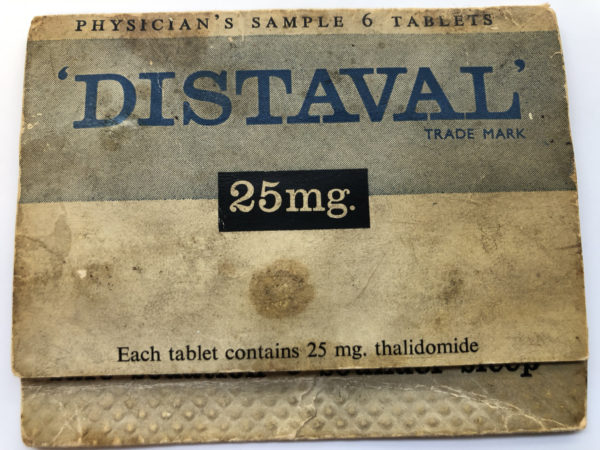