Home » Resources » Blog » Received wisdom in an age of enquiry

Received wisdom in an age of enquiry

Professor John Peter Renwick FRSE, the University of Edinburgh, is one of the world’s leading experts on the French Enlightenment and was awarded the RSE Sir Walter Scott Medal in 2021. It recognises the monumental and ground-breaking contribution he made to the 140-volume Complete Works of Voltaire, a French philosopher, historian and social reformer.

It is the words chosen to justify the award of the RSE Sir Walter Scott Medal, which highlight a ‘ground-breaking contribution’ to a better understanding of Voltaire, and the ‘scholarly resurrection of the highly significant figure, Jean-François Marmontel’, that have given me the greatest pleasure. Why? Looking at those citations, which underline the ‘usefulness’ of my endeavours, I suspect that such recognition would have appeared a very remote future possibility to those colleagues who – in the beginning – airily told me that my projected research topic on Voltaire was pointless since ‘everything had already been said’, while my fall-back position (a rehabilitation of Marmontel’s reputation, seriously damaged in academia a century earlier) was ‘a total waste of time’ and even ‘dangerous’ (presumably for my future career). If perchance I were to be invited – all these years later – to give guidance to young scholars, I would unhesitatingly say: beware of negative advice or warnings, however well-meaning they may be. Always follow your instincts and your enthusiasms, and above all leave nothing unquestioned.

The greater of the two challenges being the rehabilitation of Marmontel, I spent the early years laying the foundations for the impartial scholarly enquiry, that I believed he deserved, by providing an increasingly receptive academic community with all the basic tools that would help to justify the beginnings of his rehabilitation. There being no comprehensive record of what had been written on him since his death (1799), clearly  an extensive critical bibliography from 1800 onwards, which sifted thoughtless denigration from informed opinion, would have to be provided; his Memoirs, though not unknown, had never been properly edited and would have to be subjected to the usual rigorous analysis; his Correspondance, for which there existed no centralised record, was an unknown quantity whose quality remained equally unknown. All those projects were duly brought to fruition. In parallel, I had penned numerous studies dealing with significant aspects of his career, and built up an extensive research collection funded by, and housed in, the University of Clermont-Ferrand.

It was there that a turning point in my career came about: the discoveries that I had made regarding the ‘philosophical’ activities (1766-1768) that had pitted Marmontel and his ally Voltaire against the forces of reaction, brought me to the attention of Theodore Besterman, the Founding Father of the Oxford Œuvres completes de Voltaire, who invited me to join his editorial team. My resultant enthusiasm led thereafter to a large volume of editorial work which brought me to understand not only that dozens of his texts were, in practical or interpretative terms, no more than mere titles, but also that his greatest claims to celebrity, on which supposedly ‘everything had already been said’, had – as I demonstrated with the Traité sur la tolérance – much to reveal because they had never been correctly contextualised. Over the years, my dual calling as both a literary specialist and a historian proved to be invaluable.

One of the immediate benefits of the chronologically ordered Oxford edition is that it has given scholars the opportunity to view Voltaire from totally new angles. In the past, one studied (or taught) him as a dramatist (e.g. Zaïre), or a conteur (e.g. Candide), or a historian (Le Siècle de Louis XIV) and we had come to view him according to those rigidly defined generic categories. Like Caesar’s Gaul, Voltaire also was in three distinct parts.  It was the synchronic and diachronic approach that made us more insistently aware of his complexity as a uniquely versatile thinker. In short, his evolving, overlapping intellectual concerns, within any given month, made us appreciate the fact that his different writings, now allied with our modern editorial insights, had been extraordinarily interdependent. If these important developments were, with the appearance of ever more numerous volumes, to became ever clearer in the last two decades of the 20th century, the most exciting developments came, however, twenty years ago with the advent of those electronic resources: Tout Voltaire and Google Books, which have revolutionised many aspects of our interpretation of him. For example, Tout Voltaire has allowed us to search the totality of Voltaire’s writings and to reclassify his extensive re-use of his own material (for years branded as a lack of creativity, even proof of senility) as a highly complex procedure of reinvention, while Google Books have, among other things, allowed me, as the editor of the Annales de l’Empire and the Histoire du parlement de Paris, to identify those historical sources used by Voltaire in their elaboration, thus facilitating, more than ever before, a truly sophisticated analysis of his mentality, and working habits.

I think myself truly fortunate to have been given the opportunity to advance knowledge in the ways that I have done in an atmosphere that I have constantly found exhilarating. 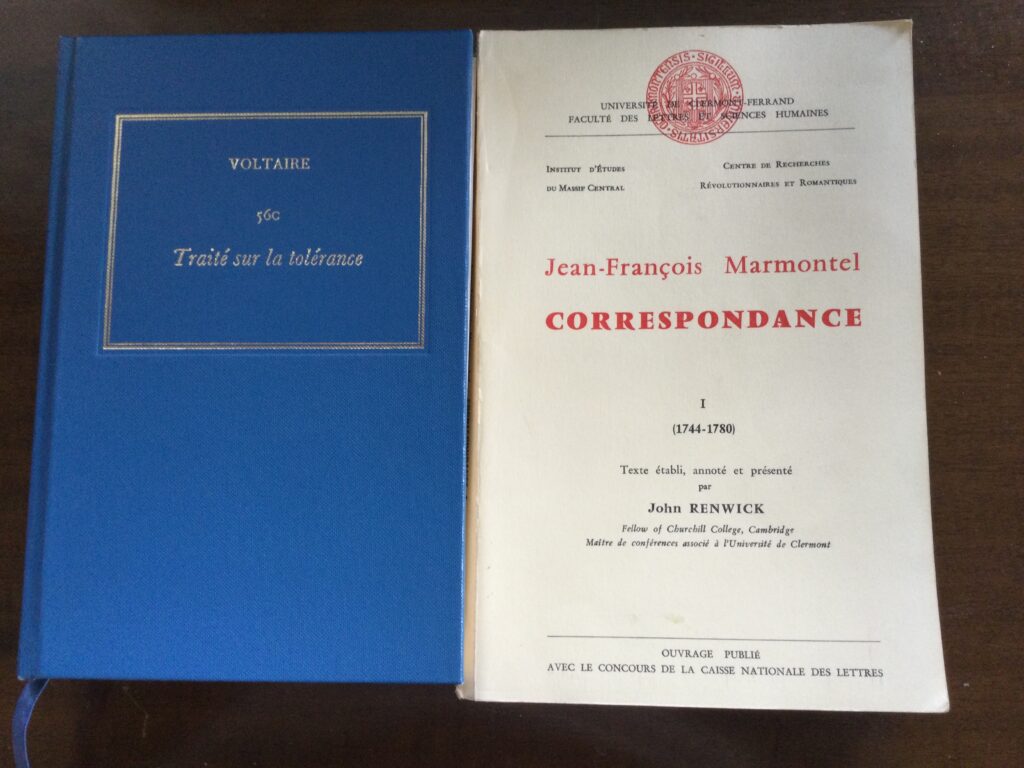