First towns: Reimagining the origins of urbanism in Europe

Cities are an integral part of our modern world. However, if looked at from a ‘deep history’ perspective, they represent a rather recent phenomenon in the human journey. The first urban centres developed around 5,000 years ago in Mesopotamia, Egypt, and the Indus Valley. In Europe, the earliest cities have traditionally been associated with the Greek and Roman civilisations, although recent discoveries have uncovered the existence of large sites of several hundred hectares already in the 4thand 3rd millennia BCE. A good example are the so-called Trypillia megasites in Ukraine, but it is still debated if they represented early forms of urbanism, large villages, or seasonal assembly spaces.

In temperate Europe, until recently it was considered that the first towns were the fortified ‘Celtic’ oppida from the 2nd and 1st centuries BCE. They were political, economic, and religious centres that, in some cases, had populations of several thousand inhabitants, exceeding the size of many medieval European towns. They extended from Spain to Hungary, and Julius Caesar repeatedly mentioned them during his conquest campaigns in Gaul. While many oppida were abandoned during or after the Roman conquest, others continued to exist and developed into medieval or even modern towns, for example Avaricum (present-day Bourges) in France.

But archaeological research is ever-evolving, and in the last decades, it has become apparent that an earlier phase of urbanisation already took place north of the Alps in the 6th and 5th centuries BCE, i.e around 400 years before the oppida. These earlier centres are known as ‘princely seats’, and include settlements such as the Heuneburg in southwest Germany and Mont Lassois in eastern France (Figure 1). Among the features shared by most of these sites are the existence of a fortified settlement on a hilltop, the appearance of imports from the Mediterranean, and the presence of rich elite burials in the surroundings. While most of these sites had been known since the 20th century, it has only been in the last two decades that we are starting to fully grasp their actual extent and manifold functions.

The best investigated example is the Heuneburg, located next to the Danube River. The site became famous in the 1950s due to the excavation of a mudbrick wall that shows a direct architectural influence from the Mediterranean. However, for a long time it was believed that the Heuneburg was a small hillfort of only a few hectares. This picture has radically changed since the early 2000s, when large-scale excavations and surveys uncovered a large outer settlement of at least 100 hectares. This outer settlement was subdivided into different neighbourhoods, perhaps inhabited by the various clans or lineages that would have come together at the time of the foundation of the Heuneburg. The new discoveries are revolutionising our knowledge of the site and forcing us to rethink its importance and demography (Figure 2). It is now estimated that in the 6th century BCE the Heuneburg had a population of around 5,000 inhabitants, which would have surpassed the size of many contemporary Greek and Phoenician towns. Imports from distant regions (from the Baltic to the Mediterranean) attest to the wide connections of the community, and the rich burials in the environs of the settlement suggest a hierarchically organised society in which certain elite women played a prominent role.

In recent decades, other ‘princely seats’ have also benefited from intensive research. In France, the site of Bourges extended for probably more than 200 hectares in the 5th century BCE, whereas Mont Lassois had at least 40-45 hectares. At the latter settlement, several monumental buildings with an apsidal shape have been identified, the largest measuring 33 × 20 metres (Figure 3).

But the process of early urbanisation represented by the ‘princely seats’ was relatively brief. After a few generations, all of them were either abandoned or in a marked decline. In some cases, we have evidence for a violent ending. For example at the Heuneburg where the settlement was burned down or at Mont Lassois where some stone sculptures, probably representing elite ancestors, were intentionally destroyed. In other cases such as Bourges, we are probably dealing with a planned abandonment, perhaps in the context of a substantial migration following a political decision. While the reasons for the fragility of the ‘princely seats’ are still debated, most likely we should be a looking at a combination of factors, including climatic changes and possible revolts against the elites after a period of increasing social inequalities. In any case, the ‘princely seats’ serve as a good example of the non-linear character of history: people can come together but also move apart, and many cities around the globe have been rather short-lived. Living together can generate benefits but also tensions, and long-term success should not be taken for granted. Cities, past and present, are not end products, but rather processes in the making.

Fernández-Götz, M. and I. Ralston (2017): The complexity and fragility of Early Iron Age urbanism in West-Central Temperate Europe. Journal of World Prehistory 30(3): 259-279.

Dr Manuel Fernández-Götz, the University of Edinburgh, was awarded the RSE Thomas Reid Medal for his position as a leading Early Career researcher on diverse aspects of the European Iron Age. His contributions have provided markedly fresh thinking in impressive monographs, edited collections, and papers in highly regarded journals. 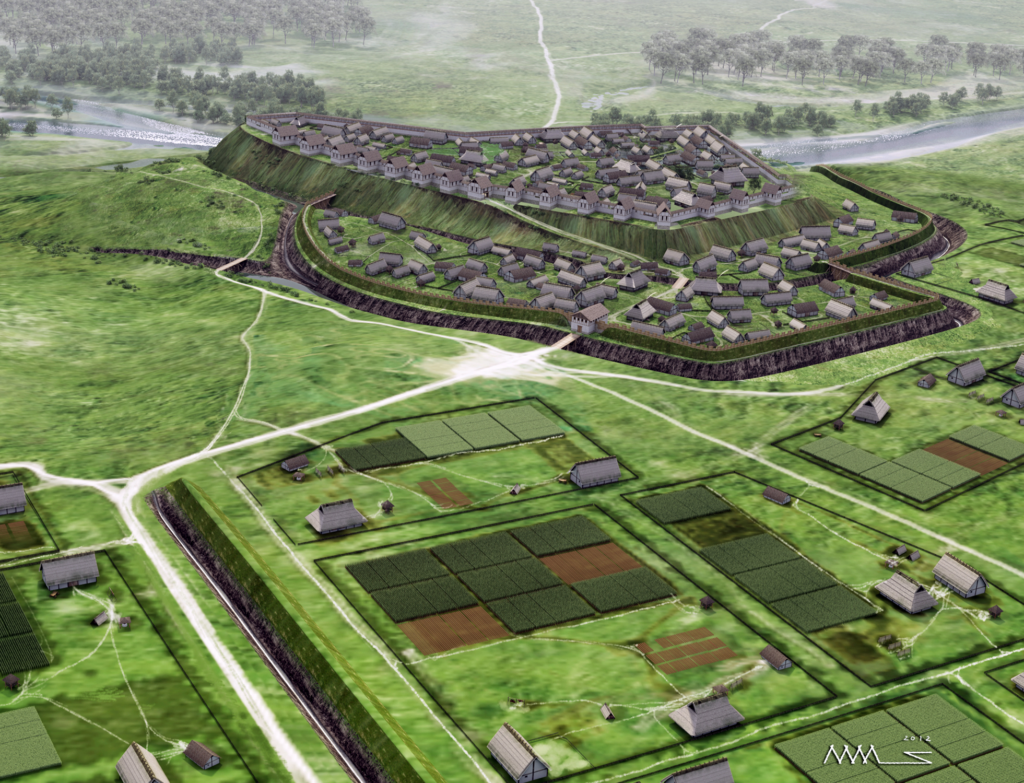