Home » Resources » Blog » Down the waters of Loch Tay

Down the waters of Loch Tay

The Scottish Crannog Centre is a living Iron Age history museum on Loch Tay in Perthshire, with £2.3 million in funding announced by Scottish Government to relocate to a nearby site following a fire. Professor Alison Phipps describes how it inspires visitors to share stories and ponder the potential of restorative integration.

I ‘m sitting round a fire in the open air at the International Storytelling Festival up in Kenmore at the Scottish Crannog Centre. A host of visitors have been rapt listening to lyre players, and stories from Dr Gameli Tordzro, Tawona Sitholé from Ghana and Zimbabwe, and from Graham, the Crannog Centre’s own storyteller.

As is the tradition with a Ceilidh, but also with circles for music and tellings the world over, a story prompts a song, which prompts a joke and in the hands of skilled tellers there is a sense of another world being woven and each guest is part of those strands. Children are eagerly calling out ideas and adding the pattern of the story as it’s made.

As so often in the arts, it’s from the unpresupposing apprentice at the Scottish Crannog Centre that a powerful Scots traditional song stops everyone in their tracks.

I’ve done my work of day,

and I row my boat away,

down the waters of Loch Tay,

as the evening light is fading…

Ben Lawers peeping out above Loch Tay above the charred remains of the Crannog, that burnt down tragically, earlier in the Summer of 2021. The lament, the love lost, in Isobelle’s beautiful voice perfectly captures the scene. The yearning for a new place, a restoration of a home for all the extraordinary finds from underwater archaeology that have been brought out of the Crannog excavations over the years.

Such is the life and work of the Crannog Centre and as it has met with the work of the UNESCO Refugee Integration through Languages and the Arts (RILA) and some of the RSE Fellows and Young Academicians from the At-Risk Academic Refugee (ARAR) scheme this year there has come a deeper understanding of the powerful potential of such sites.

After visiting the site for the first time, YAS Scholar Dr Hyab Yohannes was invited to place his fingers into the imprint of that of a child’s fingerprint left 2,500 years ago and found on a fragment, now in a shoe box awaiting its arrival in a new Crannog museum in future. The moment of meeting this child through the millennia had a profound effect on Hyab. He is himself a survivor of torture and trafficking, and he has a great stock of stories of his own and others to tell which will hold you by a fireside in disbelief, in tears and anger and hope, he said this of the work: “By placing my fingers onto the fingerprints of the precolonial ancestor I felt like I was an ‘exile’ to a decolonial space where the binary paradigm of ‘us vs. them’ and the duality of the oppressor and the oppressed disappear permanently. Indeed, exile into the Crannog symbolises a redemption from the sins of coloniality and capitalism. Yet this birth of a decolonised space in a little-known village in rural Scotland is a birth that is neither celebrated nor articulated.”

What work at a precolonial archaeological site, meeting the fragments of life from a people who – evidence suggests – worked hard to make a good and peaceful life from the substance around them. It offers a beautiful opportunity for what Hyab has termed “restorative integration”. 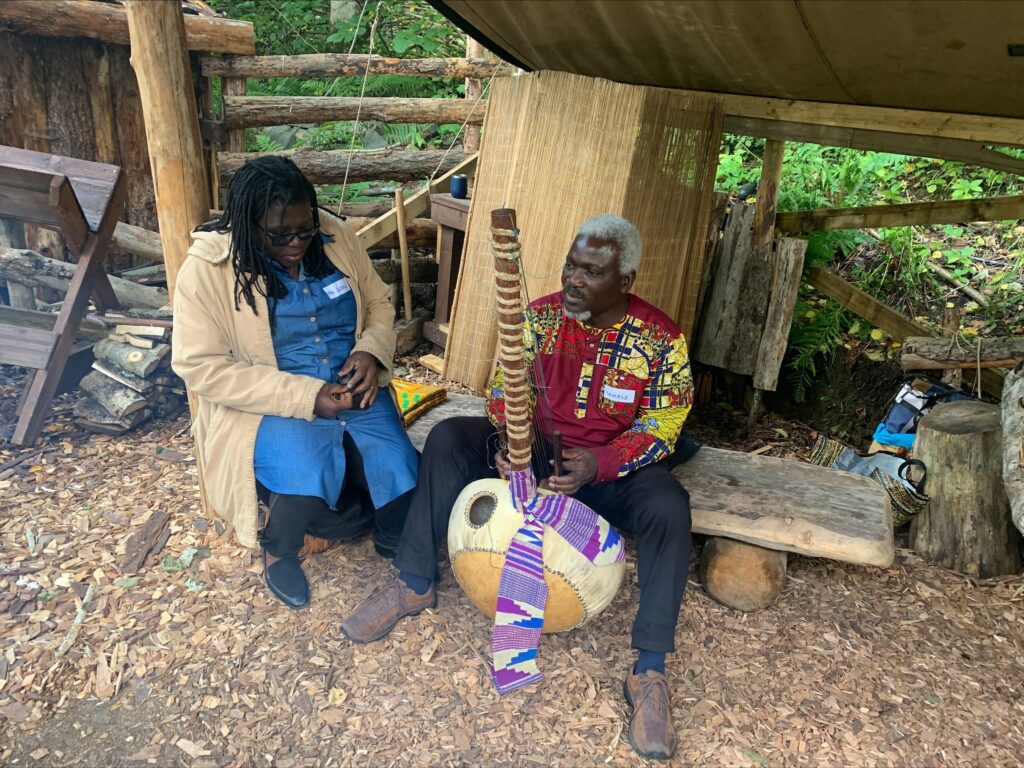