Home » How we are governed/Our staff » Professor Mona Siddiqui OBE 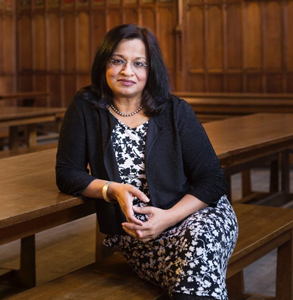 Mona Siddiqui is Professor of Islamic and Interreligious Studies, Assistant Principal for Religion and Society and Dean international for the Middle-East at the University of Edinburgh. Her research areas are primarily in the field of Islamic jurisprudence (fiqh) and ethics and Christian-Muslim relations.

She has held research grants from The John Templeton Foundation and the Henry Luce Foundation on Christian-Muslim studies. She has held visiting professorships at several Dutch and American universities; in 2014 she served as a Humanitas Professor at the University of Cambridge and in October 2021 held a distinguished Visiting Professorship at Hartford Seminary in the US.

Professor Siddiqui is also well known internationally as a public intellectual and a speaker on issues around religion, ethics and public life. She is a regular commentator in the media, known especially for her appearances on BBC Radio 4 and BBC Radio Scotland’s Thought for the Day. In June 2016, she became a panellist on BBC Radio 4’s award-winning The Moral Maze.  In 2012, she appeared as a guest on Radio 4’s Desert Island Discs and in July 2015, was a guest on BBC Radio 3’s Private Passions.  She chairs the BBC’s Religious Advisory Committee in Scotland.

In 2011, she was awarded an OBE for her interfaith work. She has spoken on religion and politics at the World Economic Forum in Davos and been listed in the Debretts top 500 list of the most influential people in the UK. In April 2019, she received the Archbishop of Canterbury’s Hubert Walter Award for Reconciliation and Interfaith Cooperation. In April 2019 she was elected a Fellow of the American Academy of Arts and Sciences and in December 2020, she was elected honorary member and first speaker of the Royal Scottish Academy.