Tapping All Our Talents

Women in science, technology, engineering and mathematics: A strategy for Scotland

This inquiry was originally published in 2012, the information shown here is accurate to that time.

In 2018, we published a follow-up report to detail the progress made since Tapping All Our Talents:

View Tapping all our talents 2018

We also curated an exhibition to showcase some of Scotland’s leading women within STEM and provide role models to those considering a career path in STEM fields, featuring a number of RSE Fellows.

View Women in Science in Scotland:

The majority of women with qualifications in science, technology, engineering and mathematics (STEM) subjects do not work in STEM areas. This is in marked contrast to men.

The consequence is a serious loss across the whole economy not just in Scotland but throughout the UK as well as many other European countries. Indeed employers in key sectors are reporting large impending shortages of people with STEM qualifications.

Scotland must address this issue. To be a smart economy, we need strength in STEM areas.

The Working Group has produced a cohesive and comprehensive strategy aimed at increasing both the proportion of women in the workplace qualified in STEM, and the number who rise to senior positions in universities and research institutes, government, business and industry.

The RSE is most grateful to Dame Jocelyn and her Working Group. We are keen this report will lead to a coherent strategy, particularly in Scotland, to address this most important issue. We stand ready to assist Governments and other key agents to develop and monitor this strategy.

In 1991 the number of female professors of physics in the UK doubled: it went from one to two! By 2009/10, it had risen to 36 – clearly a huge improvement. But that is still 36 out of a total of 650 professors of physics. A fifth of the UK university departments still have none. Clearly, there is still much work to be done before women are more equally represented in this area.

The Scottish data for the career paths of women qualified in science, technology, engineering and mathematics (STEM) show similar trends to the UK. The country cannot afford this wastage of talent. We need to tap all our talents.

The causes of this problem are not simple. Tackling it will require concerted efforts from Governments (both in Scotland and the UK), academe and learned societies, and business and industry. We make specific recommendations to each.

This report is based on an open written consultation, a formal survey of professional organisations and learned bodies, and an extensive review of the research literature. These were complemented by interviews and discussion fora with relevant stakeholder groups, including academia, trade unions, business and representative organisations.

My thanks go to the many people who have contributed to this study and report; particularly to Professor Alice Brown (Deputy Chair of the Working Group), and Dr Caroline Wallace who provided the secretariat.

We are also grateful to the Office of the Chief Scientific Adviser for support to enable this report to be disseminated widely. Through that process, we hope to reach those who have it within their grasp to transform this issue.

The Royal Society of Edinburgh, as the National Academy for Scotland, has a Fellowship containing great expertise across all the sciences, technologies, humanities and the arts. The Fellowship is elected from the worlds of academe, public and private service, commerce and industry. As a membership organisation, it has no political allegiance, nor does it represent any sectoral interest. As such, it is uniquely placed to offer informed, independent comments on matters of national interest.

Science, engineering and technology are vital to Scotland’s future. They catalyse its development as a modern economy, support public policies for health, wellbeing and environmental sustainability, and contribute greatly to its intellectual vitality.

These roles are played by its research base, whose excellence depends on people: on the education and training that form them and the opportunities that stimulate their creativity.

Scotland fails to realise the full potential of its research base, and will continue to do so if it systematically fails to cope with the debilitating loss of talent represented by the high attrition rate of highly-trained women from employment. Although our universities now graduate large numbers of women in science, technology, engineering and mathematics (STEM), 73%of women graduates are lost from STEMcompared with 48%ofmale graduates, with a corresponding loss of researchers. In academia, expensively trained women are lost in larger proportions than men at every step of the postgraduate ladder and are under-represented in top positions across the spectrum of business, public service and academia.

Although this represents a loss of opportunity to individuals, it also represents a major, quantifiable loss to the economy and society. It is estimated that a doubling of women’s high-level skill contribution to the economy would be worth as much as £170million per annum to Scotland’s national income. It is an economic loss that Scotland can ill afford, but it also represents a loss of distinctive but less quantifiable qualities from key roles in the economy and society that women are demonstrably able to contribute. This rate of loss of highly-trained women from the workforce is taking place at a time when, even though the country is in near recession conditions, many of Scotland’s employers in the science and technology sectors are unable to find sufficient qualified, skilled and experienced workers.

What is the cause?

We have analysed the factors that cause this loss of talent. Some are the practical hurdles of family responsibility, but many are cultural factors that relate to attitudes in the workplace, the organisation of science and technology with concomitant difficulties in accessing career resources and, inevitably with such a low female representation at senior levels, a lack of role models.

There have been many laudable schemes that have attempted to stem this loss of talent, but which, because of their often ad hoc, partial and short-term nature, have failed to have a sustained impact. If applied with energy and determination as part of a coherent strategy, such initiatives have the potential to make Scotland one of the best places in the world to work in science and technology – a destination of choice for talented women from Scotland and abroad, and with spin-off benefits for the wider role of women in Scottish society.

We believe that Scotland has the means to develop an integrated, comprehensive and coordinated strategy for change. This will require political vision and commitment from leaders and organisations in academia and business. It will also require a major cultural change in attitude and approach. We make the following recommendations to key institutions as component parts of an action plan designed to achieve this change.

The figure below sets out a Programme for Action which includes key recommendations and the targets and measurable outcomes that flow from them:

The scope of the study

The Royal Society of Edinburgh established a Working Group to develop a cohesive and comprehensive strategy for Scotland aimed at increasing both the proportion of women in the STEM workforce and the number who rise to senior positions in universities, institutes, government, business and industry.

There is no single, agreed definition of what constitutes the STEMsector. For this Report, we have adopted the definition used in the recent BIS study i.e. Physical and Biological Sciences, Engineering and Technology, Mathematics and Computer Sciences.

This study has focused on the postgraduate employment of women in STEM. Encouraging girls to take up STEM subjects in primary and secondary schools has been the subject of a separate Working Group established by the Chief Scientific Adviser for Scotland.

Issues of retention, attrition and representation of women in clinical medicine are not addressed specifically in this study. However, our recommendations will be of relevance to the position of women in academic medicine. Similarly, the majority of the recommendations in this Report are generic and can be applied to other disciplinary areas and labour market sectors.

Our approach and the structure of the report

We have complemented a literature review with interviews and discussion fora involving representatives from different stakeholder groups including academia, trade unions, business and representative organisations; a formal written consultation and a survey of learned societies/professional organisations. Details are provided in Appendix C.

The main body of the report addresses, in turn, a consideration of the loss of talent in the STEM sector and an analysis of the current situation and contributing factors. The recommendations which follow in Chapter 3 are set out in several self-contained sections, each addressing a key stakeholder and showing how they can deliver change. 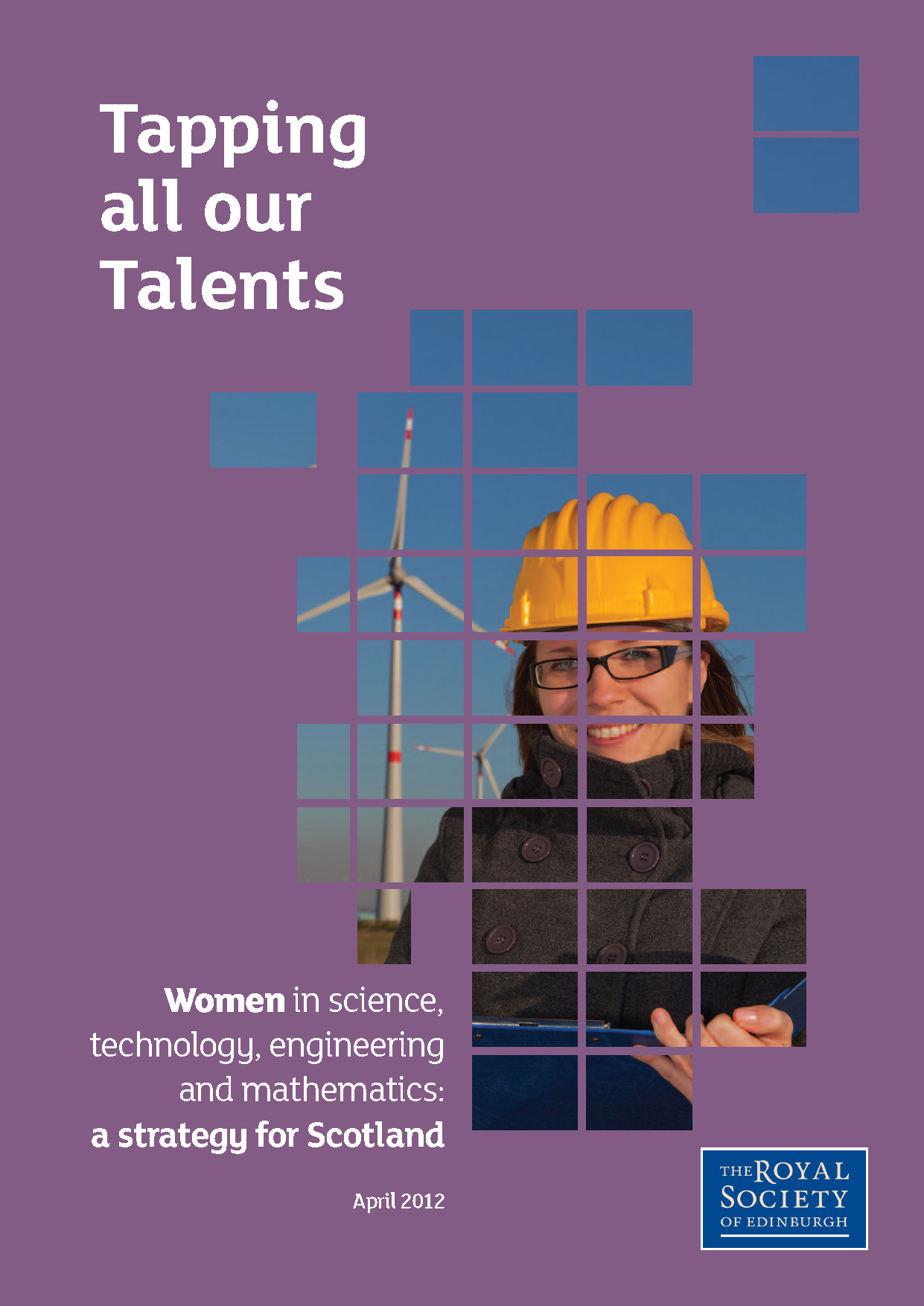 Tapping all our talents