Tapping all our talents 2018

A progress review of women in science, technology, engineering and mathematics in Scotland

This inquiry was originally published in 2018, the information shown here is accurate to that time.

Following on from the inquiry, we curated an exhibition to showcase some of Scotland’s leading women within STEM and provide role models to those considering a career path in STEM fields, featuring a number of RSE Fellows.

View Women in Science in Scotland:

It’s six years since Tapping All Our Talents (TAOT) was released by the RSE in 2012. Much has changed in that time but has the lot of women in Science, Technology, Engineering and Maths (STEM)? Has the infamous ‘leaky pipeline’ – the graph which shows the lack of women making it to leadership positions in academia – been fixed? Are more than 27% of female graduates entering a STEM-related job on graduation? Are women in STEM in a better position, a worse position or in just the same position as previously? What more needs to be done to enable women to play their full part in shaping our future – helping to solve today’s key Challenges using STEM-based skills to build a better and more economically vibrant Scotland?

These were some of the questions that motivated the RSE to look at current data and engage with interested groups and individuals to produce TAOT2018. The Young Academy of the RSE immediately offered their help on learning of the intended report and their enthusiasm, commitment and skills are gratefully acknowledged. My thanks also go to the Working Group, everyone who contributed and particularly to Susan Lennox, who led on the drafting of this report.

As the Working Group started this study we debated what the scope of TAOT2018 should be. We decided to reconsider topics from the original report and to complete the ‘pipeline’ to include pre-undergraduate years. We made a positive decision to limit ourselves to STEM subjects because much still remains to be accomplished here. Many years ago, when I first became aware and interested in the issues surrounding a lack of women in STEM, I set myself the target of trying to make STEM a more inclusive world for the women of tomorrow. Progress has been too slow for my daughter’s generation but I am hopeful for my granddaughter’s. I hope the TAOT movement will make a difference for her and for all Women in STEM.

The Royal Society of Edinburgh, as the National Academy for Scotland, has a Fellowship containing great expertise across all the sciences, technologies, humanities and the arts. The Fellowship is elected from the worlds of academe, public and private service, commerce and industry. As a membership organisation, it has no political allegiance, nor does it represent any sectoral interest. As such, it is uniquely placed to offer informed, independent comments on matters of national interest.

For consistency and readability, decimals in the figures presented in the report have been rounded up or down to the nearest whole number.

It is well recognised that Scotland must nurture, develop and value its STEM (Science, Technology, Engineering and Mathematics) skills base if it is to rise to the challenges that are increasingly shaping its economy and its society. An innovative economy and STEM-literate society are crucial to ensuring that Scotland can respond to – and, indeed, take full advantage of – global disruption driven by digital technologies, the changing climate and an ageing population. Diverse teams can flourish through the creativity that results from bringing together different ideas, views and experiences, from greater constructive debate and from a broader understanding of clients’ needs. Research links greater diversity in an organisation’s workplace with a greater likelihood of above-average profitability.

Yet, at a time when both the Scottish Government and industry identify STEM skills gaps as restricting progress towards national ambitions and economic performance, entrenched gender stereotypes continue to limit the potential of girls and young women to fully develop their interest and abilities in STEM subjects. Tapping All Our Talents 2012 found that, even where young women overcame barriers to studying STEM and graduated with STEM degrees, only 27% remained in the STEM sector; around half the equivalent proportion of their male counterparts.

Improving gender equality in STEM is both a social justice imperative and an economic necessity. Tapping All Our Talents 2012 set out the foundations of a national strategy towards gender equality in STEM workplaces in Scotland. It was a call to action, articulating the case for urgent focus on the issue, outlining the barriers women faced in STEM, and identifying steps to tackle under-representation. Six years on, the Royal Society of Edinburgh (RSE) and Young Academy of Scotland were eager to explore what progress, if any, has been made.

Through a public consultation, a series of roundtable discussions, and a review of the literature and data available, the Tapping All Our Talents Review 2018 considers what has – and has not – changed for women working in STEM in Scotland today. Recognising the need for a holistic, coherent and sustained approach to engaging girls and young women in STEM, the RSE expanded the remit of the Review Group to consider female under-representation in STEM education and training, as well as in STEM workplaces.

The Review Group was heartened to find that, by some measures, marked progress has been made towards redressing gender imbalances in STEM:

Such progress, however, is not universal:

What has become increasingly clear in the years since the publication of Tapping All Our Talents 2012, is that gender equality in STEM can only be achieved through a fundamental shift in societal perceptions of gender ‘norms’ more generally. This is a significant and complex challenge: stereotypes are introduced at birth and consistently reinforced by families, carers, peers, media, social media, educators and employers. But it is a challenge that must urgently be tackled if Scotland is to eradicate the harmful impact of such stereotypes on the wellbeing of all its young people and enable them to reach their full potential.

It is within this societal context that the Tapping All Our Talents Review 2018 considers what must be done to achieve a step-change in progress towards gender equality in STEM. Every individual and institution involved in educating children and young people in Scotland, and in shaping STEM workplace cultures and practices, has a role to play in breaking down the barriers that girls and women face. The report considers each stage of education and training, and both industry and academic workplaces, setting out the key findings on persistent barriers and possible next steps for each one. Many of the challenges that girls and women face to engaging in STEM manifest at a very early stage and persist throughout education, training and work. Unconscious – and sometimes conscious – biases shape the advice and guidance given to girls and young women by their many influencers, from parents and teachers to peers and media. Misperceptions of STEM and STEM careers, the stereotypical view of the brainy scientist in a white lab coat, act as a deterrent to young women who frequently seek creativity and positive societal impact in their career choices. This is compounded by low teacher confidence in STEM, particularly within primary schools and often out-of-date or limited understanding of STEM industries.

In the workplace, biases persist in the attitudes and actions of management and colleagues and in processes, including recruitment and promotion. With STEM industries often dominated by men, women can face a challenging working environment, have fewer role models, less peer support and more difficulty in building or accessing networks. These barriers compound the difficulties that many women, in all sectors, face to remaining in the workforce when they are also expected to take on a greater share of caring responsibilities. The paucity of high-quality flexible and part-time roles, the impact of career breaks on long-term career prospects, expensive and inflexible childcare and the persistent gender pay gap are all obstacles to gender equality in the workplace.

But there emerges a number of themes that will underpin the success – or otherwise – of the drive towards gender equality in STEM across every stage and every sector. It is under these themes that the Tapping All Our Talents Review 2018makes its key recommendations. Recognising that there is no single path through which the complex and sizable issue of gender equality can be addressed, these are high-level recommendations that we hope will stimulate a wide national conversation within and across sectors about the specific actions required to address continuing gender inequality in STEM and across society.

Underpinning activity at all levels and across all sectors and pathways are four themes: 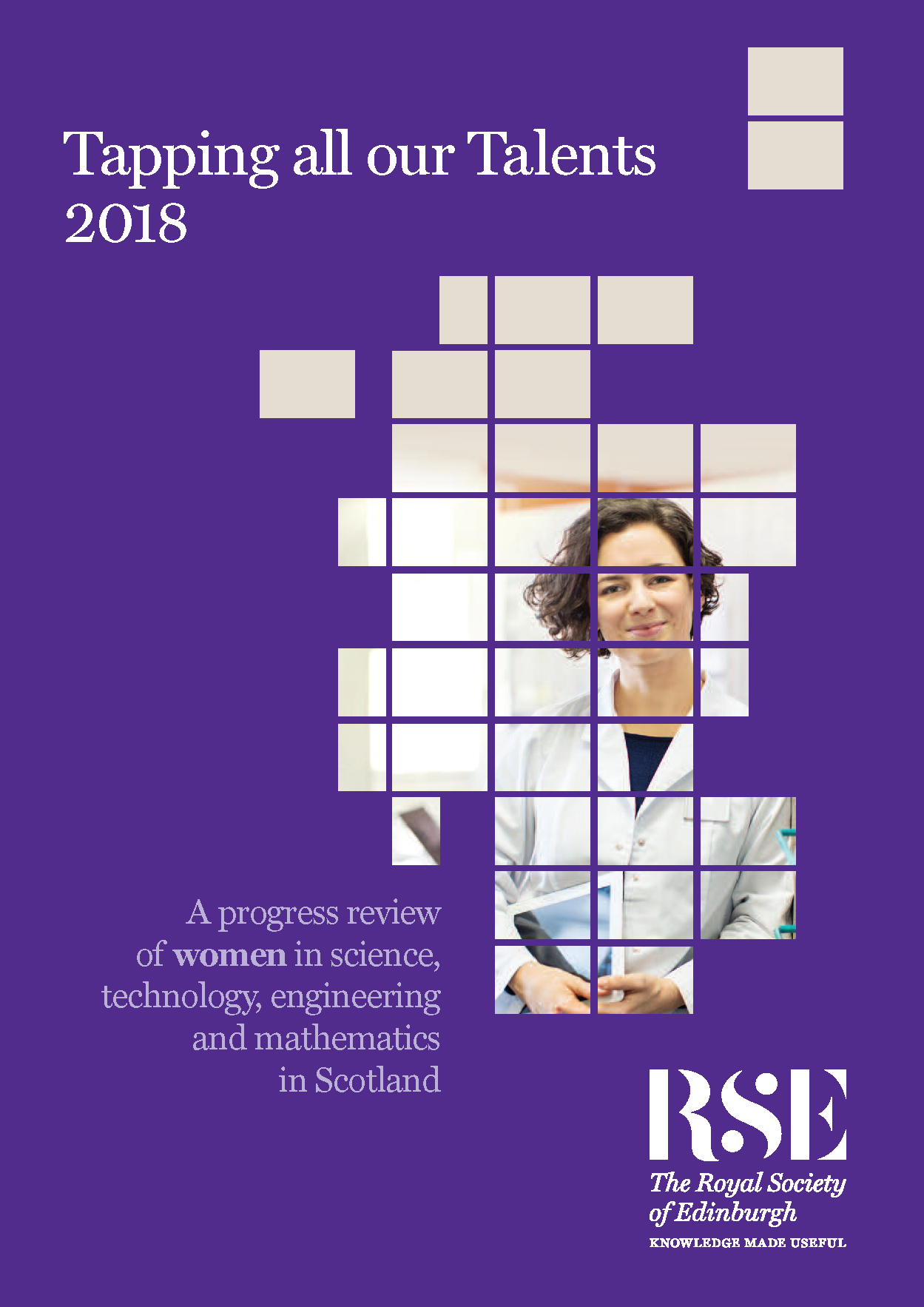 Tapping all our talents

RSE Fellows included in The New Year Honours 2022
An update about the RSE Enterprise Fellowships
RSE Enterprise Fellowship scheme is boosting the economy and society
Manage Cookie Consent
We use cookies to optimise our website and our service.
Manage options Manage services Manage vendors Read more about these purposes
Preferences
{title} {title} {title}